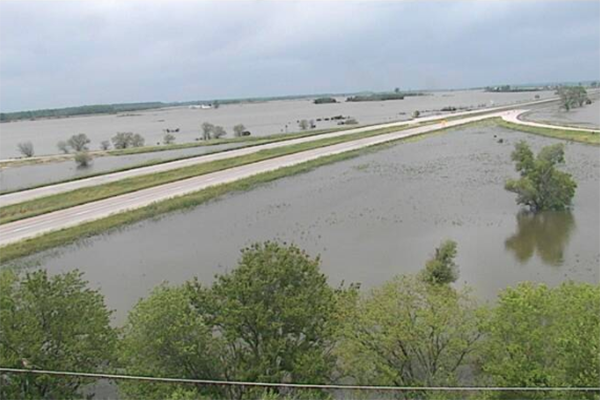 This Iowa Department of Transportation camera screenshot shows Interstate 29 at the intersection of North 200th St. in Percival, Iowa, on Tuesday, June 11, 2019. Flooding along the Missouri River has I-29 and multiple state highways closed in Missouri, Iowa and Nebraska, which will reroute many Arkansas fans driving to the College World Series this weekend.

FAYETTEVILLE — Arkansas fans came in droves to Omaha, Neb., last June during the Razorbacks’ appearance in the College World Series.

To get to Omaha this weekend, they likely will have to take a different route.

That means the usual six-hour drive from Fayetteville to Omaha could be extended by around 1-3 hours via detour routes through Missouri, Kansas, Nebraska and Iowa.

The I-35 and I-80 intersection is about 130 miles east of Omaha. According to Google Maps, that route would be around an 8 1/2-hour drive time from Fayetteville to Omaha.

"Our first preference would be to use I-35 if you're going north," said Adam Watson, the northwest engineer for Missouri DOT. "That's still an interstate, interstate-standard, can still handle that type of traffic.”

For drivers who do not take the I-35 route, Watson said traffic is being diverted off I-29 onto U.S. 71 just north of St. Joseph, Mo., about 40 miles north of Kansas City.

"There is really nowhere to get off the interstate once you get past (U.S. 71) for trucks and cars intending to use the interstate to go out of Missouri," Watson said. "There are actually barricades at the Iowa border because there is water over it and substantial damage in Iowa.

"U.S. 71 is the last highway that is really capable of handling that type of traffic with larger trucks, larger volumes and that nature.”

Scott Suhr with Iowa DOT said U.S. 71 has become a popular detour for motorists. U.S. 71 intersects with I-80 near Lorah, Iowa, about 65 miles east of Omaha.

@iowadot crews closing off the on ramp to I-29 from Hwy 34. I-29 is now closed in both directions from Hwy. 34 to the Missouri border. @ketv pic.twitter.com/5UW4YNLayg

Suhr cautions motorists using U.S. 71 to be aware of high volumes of traffic along that detour.

"It's a wide road - a two-lane road, but a wide road," Suhr said. "It's carrying quite a bit of traffic right now because of the flooding.”

Watson said drivers en route to Nebraska can cross into Kansas from St. Joseph using U.S. 36, which intersects with U.S. 75, a north-south highway that runs through Omaha. According to the Nebraska Department of Transportation highway map, U.S. 75 is open but does include some delays because of road construction.

"If you're planning on heading up into Nebraska, going over into Kansas and then heading north is great," Watson said.

Suhr said another detour has been U.S. 59 from Rock Port, Mo., then intersecting with I-80 in Iowa.

"However that road is a little bit narrower, a little bit rougher in its condition and needs some work done," Suhr said.

Heavy mid-March rainfall combined with warm temperatures led to catastrophic flooding along the Missouri River and its tributaries. On March 14, the Spencer Dam on the Niobara River in Nebraska collapsed.

Three people died in Nebraska and Iowa because of the flooding, which caused more than $3 billion in damage across those two states, according to reports.

"This is due to heavy snowfall in February and then heavy rain that caused a lot of that snow to melt," Suhr said. "There was frost on the ground, so water couldn't go into the ground. A lot of the pipes were full of ice and snow from the winter, so we had a lot of runoff.”

I-29 was closed in March and reopened in early May. It was forced to close again late last month because of more heavy rainfall.

"Once the water recedes we'll be able to begin our examination of the pavement and assess it, and make sure it's safe before we open it back up, along with the bridges," Suhr said. "But we don't know how long that's going to be yet.”

For more information and the latest highway conditions on the roads between Arkansas and Omaha, visit the DOT websites for Missouri, Kansas, Iowa and Nebraska.