Vote authorizes the taking of Barr, McGahn to court by Compiled by Democrat-Gazette staff from wire reports | June 12, 2019 at 4:30 a.m. 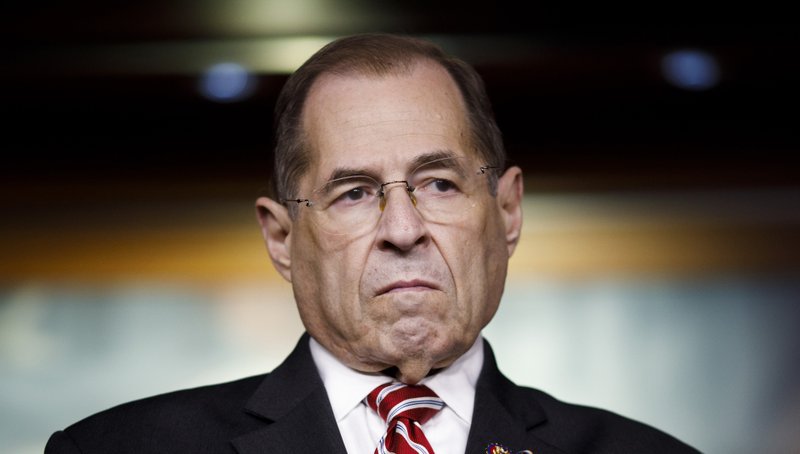 Rep. Jerrold Nadler, D-N.Y., chairman of the House Judiciary Committee, said Tuesday that the “unprecedented stonewalling by the administration is completely unacceptable.”

On a party-line vote of 229-191, the House passed a resolution that would empower the House Judiciary Committee to go to court against Barr and McGahn over noncompliance with requests for documents and testimony.

"We need answers to the questions left unanswered by the Mueller report," Speaker Nancy Pelosi said on the House floor ahead of voting.

House Minority Leader Kevin McCarthy countered that the Democratic maneuvers are all "just a desperate attempt to relitigate the Mueller investigation." He called it "an impeachment effort in everything but name."

Arkansas' four representatives, all Republicans, voted against the measure.

The vote keeps Democrats on an investigative track favored by Pelosi, D-Calif., and other top leaders -- and away from the formal impeachment inquiry that some 60 rank-and-file Democrats and several 2020 presidential candidates have been seeking.

The House vote reflects the frustration among Democrats with Trump's unwillingness to cooperate with congressional investigators, who argue they have a constitutional right to examine the executive branch.

"This is a dark time. This Congress is being tested -- in this case, not by a foreign adversary, but by our own president," said House Rules Committee Chairman Jim McGovern, D-Mass.

Democrats have already gone to federal judges in Washington and New York to seek enforcement of subpoenas targeting Trump's financial records that are in the possession of private companies. They have scored initial wins in trial courts, but appeals are likely to play out over the coming months.

The vote stops short of a criminal contempt citation, a more serious sanction, and it comes a day after the Justice Department agreed to begin providing materials gathered by former special counsel Robert Mueller during his nearly two-year probe of Russian interference in the 2016 election. Still, Democrats cast the vote as their most serious move yet in a campaign to hold Trump accountable over allegations that he acted to derail Mueller's investigation.

Heading to Iowa, Trump told reporters that Pelosi "is a mess" and criticized Democrats' investigations.

"All they do is waste time where there is no obstruction, no collusion. And in the meantime, we can't get anything done," said the president. "We need them to work on illegal immigration, on drug prices, on infrastructure."

Rep. Hakeem Jeffries, D-N.Y., chairman of the House Democratic Caucus and a Judiciary Committee member, said the aggressive tactics helped force the Justice Department to make at least some of Mueller's material available to Congress after a monthslong standoff.

"They've begun to recognize that we are going to function like a separate and coequal branch of government," he said, contrasting Democrats' posture to that of the previous Republican majority: "They consistently bent the knee to Donald Trump. That is something we will refuse to do. And we are going to make it clear that no one is above the law, one way or the other."

Barr's agreement to make some of Mueller's materials available has at least temporarily forestalled any enforcement action on that front.

The Justice Department's understanding when it reached a deal with Judiciary Committee Chairman Jerrold Nadler, D-N.Y., was that while the committee would proceed with Tuesday's resolution vote giving the committee authorization to sue, it would not actually file a suit if the Justice Department held up its end of the bargain, according to a U.S. official. The department never viewed the resolution as holding the attorney general in contempt, the official said.

Nadler confirmed in floor remarks Tuesday that enforcement of the Barr subpoena would be held "in abeyance for now." But he said he would go to court "as quickly as possible" against McGahn, who at the behest of the White House has defied subpoenas for documents and his testimony.

"This unprecedented stonewalling by the administration is completely unacceptable," he said.

McGahn was a key witness in Mueller's investigation into whether Trump obstructed justice during the probe. The committee can now also petition a federal judge to release protected grand jury materials gathered in the probe, which underpin many of the key sections that Justice Department officials redacted from Mueller's report.

McGahn has so far declined to testify pursuant to a White House legal opinion holding that close presidential advisers cannot be compelled to testify. "Mr. McGahn remains obligated to maintain the status quo and will respect the president's instruction," his lawyer, William Burck, told the committee last month.

Tuesday's vote also does nothing to bring Mueller before the House for testimony, whether public or private.

The panel is also seeking the testimony of two other Trump aides, former communications director Hope Hicks and Annie Donaldson, a top aide to McGahn. Those subpoenas were not targeted for enforcement in the resolution passed Tuesday, but it permits the committee to seek authorization from the Bipartisan Legal Advisory Group, a special panel of top House leaders controlled by Democrats -- sidestepping the need for future floor votes.

And Nadler added new names to the list, saying he is also interested in hearing from Assistant Attorney General Jody Hunt, who served as former Attorney General Jeff Sessions' chief of staff, and former White House aide Rick Dearborn. Both are mentioned frequently in the Mueller report.

"Either work with us and comply with subpoenas or we'll see you in court," said McGovern, the chairman of the Rules Committee.

The chairman of nearly any House committee, in fact, now has the ability to seek authorization from the group to "initiate or intervene in any judicial proceeding before a federal court" to enforce any duly issued subpoena.

Nadler said Tuesday that the broad authorization was necessary to fight the Trump administration's stonewalling strategy: "We cannot afford to waste all the floor time for every single time the administration rejects one of our subpoenas, which is every time we issue a subpoena."

The chairmen of several oversight committees said after the vote that Tuesday's action extends beyond the Russia investigation into other aspects of Trump's administration, including their subpoena for the president's tax returns.

"This is not just about Russia, this is a broad, coordinated campaign to stall more investigations across the board," said Rep. Elijah Cummings, D-Md., the chairman of the Oversight Committee. "We are here in a fight for the soul of our democracy and we will use every single tool that is available to us to hold this administration accountable."

McCarthy blasted that move Tuesday, telling reporters it amounted to an unprecedented delegation of legislative powers to a small panel of party leaders.

"It's something Congress has never done before," he said. "What the Democrat majority is doing is, they're trying to get to impeachment without having their members actually vote upon it. They're trying to protect members from not taking a difficult vote."

The focus on Mueller will continue today, when the House Intelligence Committee is to review the counterintelligence implications of Russia's election interference, as detailed in Mueller's report.

Also today, the president's oldest son, Donald Trump Jr., is to testify before the Senate Intelligence Committee. Trump Jr.'s return to Capitol Hill for a second private interview with members of the committee, according to people familiar with the plans, is part of a deal he struck with leaders last month after the panel issued a subpoena for his testimony.

It's the first known subpoena of a member of the president's immediate family, and some Republicans went so far as to suggest Trump Jr. shouldn't comply.

Under the terms of the deal, Trump is expected to spend about four hours with the committee answering a limited number of questions, according to people familiar with the terms -- including queries about a June 2016 meeting at Trump Tower with a Russian lawyer promising incriminating information about Hillary Clinton.

He is one of several witnesses that the committee is bringing back to its chambers for a second interview aimed at giving members an opportunity to engage with key figures in the investigation before they will be asked to sign off on the panel's final report. Its long-running investigation into Russian interference during the 2016 presidential elections has been largely staff-run, and is widely considered to be the most bipartisan probe into the matter in Congress.

It's uncertain when the intelligence panel will issue a final report. Its co-chairman, Sen. Richard Burr, R-N.C., told The Associated Press last month that he hopes to be finished with the investigation by the end of the year.

Information for this article was contributed by Mike DeBonis and Karoun Demirjian of The Washington Post; and by Mary Clare Jalonick, Lisa Mascaro, Laurie Kellman and Jonathan Lemire of The Associated Press.