A national uptick in "deaths of despair" includes rising suicide rates in Arkansas, according to a report released today by the health advocacy group The Commonwealth Fund.

It's one facet of the trend that social scientists label "deaths of despair," which are thought to contribute to shrinking U.S. life spans.

"Most states are losing ground on key measures related to life expectancy," researchers wrote in the report, "as premature deaths from suicide, alcohol and drug overdose continue to increase."

In a call with reporters, Commonwealth Fund senior scientist and lead author David Radley called the deaths "regional epidemics" that manifest differently depending on where one lives.

He said that though no one has identified definitive causes for the phenomenon, some researchers connect such deaths to economic distress and poor opportunity. 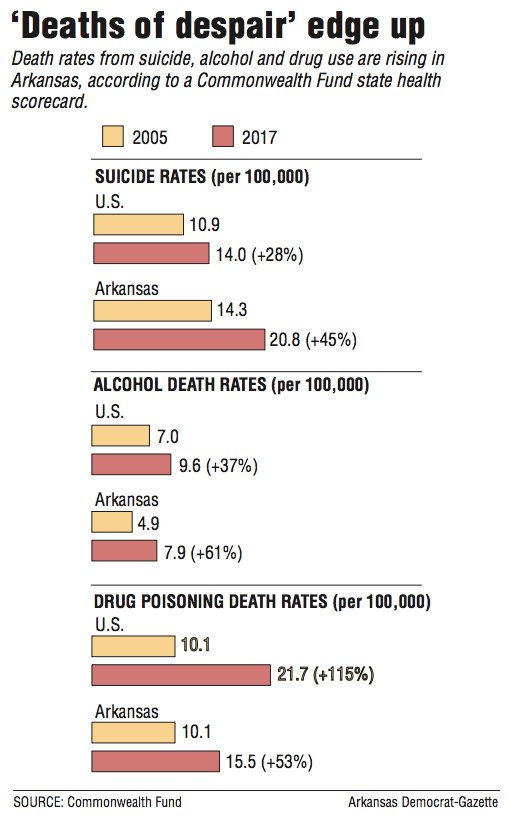 Graphs showing death rates from suicide, alcohol and drug use in Arkansas

Whether a state was most affected by drug, alcohol or suicide deaths varied, but Radley said there was no state in which those deaths declined during the period studied.

Researchers also detected spikes in the most recent data, including for drug overdoses and suicides, the latter of which "rose more sharply between 2016 and 2017 than during any other one-year period in recent history," the report said.

"[The increases] ... are concerning and represent yet another marker of complex socioeconomic and behavioral health problems across the nation," it said.

The Arkansas suicide rate translates to 631 deaths in 2017, according to the Centers for Disease Control and Prevention.

Of those fatalities, 92 were people between the ages of 10 and 24, said Mandy Thomas, the Arkansas Department of Health's injury and violence prevention section chief.

Thomas thinks the rising rates within the state could be linked to improved reporting, in which medical examiners and coroners are being better trained to identify suicides.

"We know more now than what we did a year ago or two years ago," she said.

She added that it would be "a complete guess" of what contributing factors play into suicides for Arkansans, but generally financial losses, adverse childhood experiences, the loss of a significant other or even being grounded by parents can push people into distress.

"To us as adults, it's very minor," Thomas said. "For that child at the time, it's the most important, critical thing in their lives."

The Natural State also was among 19 states where either suicide or alcohol death rates were higher than those associated with drug overdoses.

While alcohol- and drug-death rates in Arkansas both fell short of the national average, they increased significantly between 2005 and 2017, growing by 61% and 53%, respectively.

Overall, Arkansas fared poorly on the health scorecard, ranking 47th among 50 states and the District of Columbia.

It also was ranked 11th of 12 states in the country's southeast region, where Virginia received the top ranking.

Arkansas' worst performance areas included prevention and treatment; avoidable hospital use and cost; and healthy lives, which measured indicators such as cancer deaths and the percentage of residents who smoke or are obese.

That category also noted infant mortality rates, which rose in Arkansas from 7.1 to 8.2 deaths between 2012 and 2016 -- the third-highest rate in the nation, behind Mississippi and Alabama.

Nationally, the infant mortality rate dropped marginally during that time period, from 6 to 5.9 deaths.

The state's percentage of adults who went without health care because of its cost also rose to 20% in 2017 after falling to 18% the previous year.

Bright spots for the state included the percentage of Arkansas nursing-home residents taking antipsychotic medications, which fell from 24% to 15% over a four-year period.

The state's rate of uninsured adults in 2017 also was five points below the national average, at 18%.

Regarding work to prevent suicides in the state, Thomas said Arkansas is the first state to run a suicide-prevention hotline with paid full-time employees through a state agency.

"I feel like we learn something new every day. You have to keep an open mind, [be] nonjudgmental," she said.

Department staff members also do outreach that includes youth education workshops and programs for adults, such as teachers.

That can include education as basic as practicing saying the word "suicide" out loud, which people shy away from, Thomas said.

"The main thing that we should do is try to break the stigma, and the taboo around the subject," Thomas said.