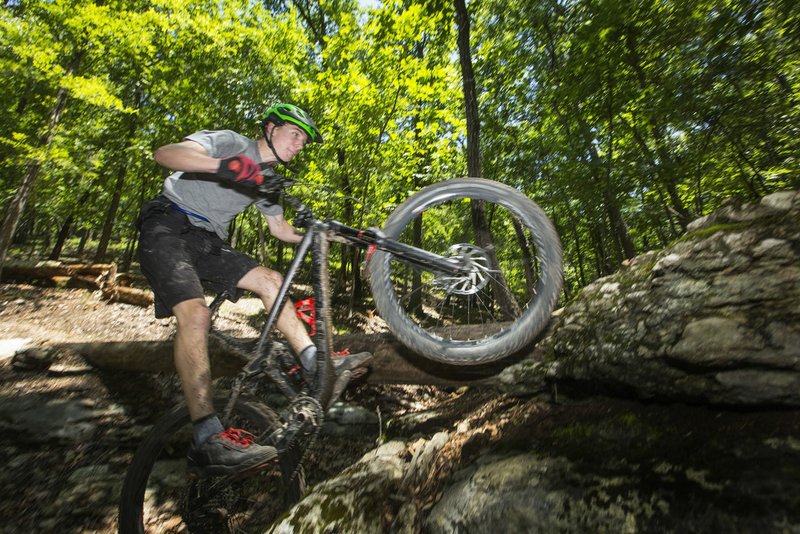 NWA Democrat-Gazette/BEN GOFF @NWABENGOFF Graham Hassion, a trailbuilder with Rogue Trails, takes an optional technical line on the Karst Loop June 8 during the grand opening of the Monument Trails at Hobbs State Park.

Northwest Arkansas is at a tipping point, says Amber Chambers. The region stands at the precipice of becoming a new mecca for mountain bikers and cyclers worldwide, and the Monument Trails debuting in four of the state's parks are going to give that momentum a giant spin forward.

"The trails have been around long enough, and we've got the infrastructure, the excitement and the trail mileage to really become a premier cycling destination. And one that is completely unique in that we're year-round," Chambers says, comparing the Ozark climate to that of popular cycling spots in Colorado and California.

"The biking itself is one thing, for sure, and it's going to draw tourists like Moab, [Utah]. Moab has hundreds of miles of trail that's easily accessible from town, similar to what we have. But we currently are on a different trajectory with our other amenities -- with Crystal Bridges, with fun things for families to do, the splash pad is super cute, the square, our restaurants, our overnight stays -- and I think it's really awesome."

Chambers is the trail project manager with the Arkansas Parks and Recreation Foundation (APRF), a nonprofit organized nearly two years ago with the mission of getting Arkansans outside and improving their overall health.

The Monument Trail system is the organization's flagship project and is a first-of-its-kind partnership for the state Parks and Recreation Department. The trails are funded through grants and private donations, but the very first trail to open to the public on June 8 -- at Hobbs State Park in Rogers -- was also made possible thanks to a $2 million grant from the Walton Family Foundation.

"The Monument Trails will be a new way for people to get to know state parks," offers Suzanne Grobmyer, executive director of APRF. "And they'll be a new way for us to come back later, maybe see something that we hadn't seen before.

"It is about mountain biking. It is about hiking. It's about getting outside. But it's about Arkansas being a wonderful place to see all these things. It's highlighting our most beautiful places, some of our most storied state parks, and giving communities a sense of pride and excitement."

What makes the Monument Trails exceptional, Grobmyer explains, is the holistic user experience. Each trail system will be established in an historic Arkansas park, with the background of each location contributing to the cultural, historical, architectural and artistic elements added to enhance each trail.

"By definition, 'monument' is a unique, special example of something. So we felt like it was an example of trails and nature and outside, and that we could highlight really cool features about that."

When it came to building a new single-track trail in a state park where one had never before existed, looking for elements to highlight meant choosing what are called control points. The control points are where you want to go when you're looking at the design, Chambers shares. So, for the 17.36 miles of trail in Hobbs State Park, that included the shoreline of Beaver Lake, unique rock formations and the tunnel connecting soft-surface-to-soft-surface that runs under Arkansas 12.

"That lakefront riding and that connection to nature from water is something that's really special about this place," Grobmyer says of the four miles of shorefront trail.

"And you can stop and swim; you don't have to be on your bike, only," Chambers adds with a laugh. "For cyclists, the view is a nice change but for beginners, all summer long you can stop, jump in the lake, walk up on the beach. It'll be nice."

Eventually, the trails in Hobbs, Devil's Den, Pinnacle Mountain State Park in Little Rock and Mount Nebo State Park in Dardanelle will have camp sites, observation points and other architectural features meant to inspire visitors to take in more of the natural beauty of their surroundings during their journey.

Once those control points were determined, Rogers environmental consultant Rogue Trails came in to Hobbs with mini excavators to peel away the top layer of soil and begin the process of creating a brand new trail.

"From there, you look at what the land offers you for contour, for interest, for turning, for climbing to get where you need to go," Chambers explains of establishing a sustainable trail bed in a natural way. "So you follow the landscape, for sure, but you do also make enhancements with turns and jumps and things like that."

Rogue Trails was chosen for the project because of their conservation mindset, making the company the perfect addition to a partnership that involved Arkansas State Parks, Arkansas Natural Heritage Commission and the Arkansas Game and Fish Commission.

Crews were careful to keep the trails as natural as possible in their construction, Chambers reveals. Everything used for materials came from a 25-foot corridor surrounding the trail, with the exception of the cedar bridges constructed in several spots. Rogue Trails owner Phil Penny even saved rocks from the excavation and consciously placed their moss-covered sides facing the right direction when they were relocated, she shares with a laugh.

"Phil was wonderful about understanding the way this trail should flow and how it should be re-naturalized so that it does look like, 'Wow, this has been here a hundred years'," Grobmyer offers.

On top of the sustainability, highlighting each region's natural beauty and the expected economic impact, in answer to perhaps the biggest question -- the ride is also pretty sweet.

"These trails are going to be going to be the new standard of mountain bike trails," Chambers says confidently. "When we first started building mountain bike trails, it was just like straight up, straight down. Lose elevation, gain elevation. And this trail in particular, when you look at the routes of Hobbs, you'll see the Hidden Diversity Trail is much more spiky in its elevation, whereas this trail follows the contour of the land."

Along For The Ride

Despite a lack of much experience -- OK, absolutely ZERO experience -- this reporter can speak to the trail's natural ebb and flow with the terrain. About a week before the Hobbs trails opened, Grobmyer and Chambers accompanied me on a brief ride to check out the trails. Thankfully, we couldn't have asked for a more beautiful day because the mild weather and sunny sky only enhanced the lake views and the reverence of being surrounded by nature. 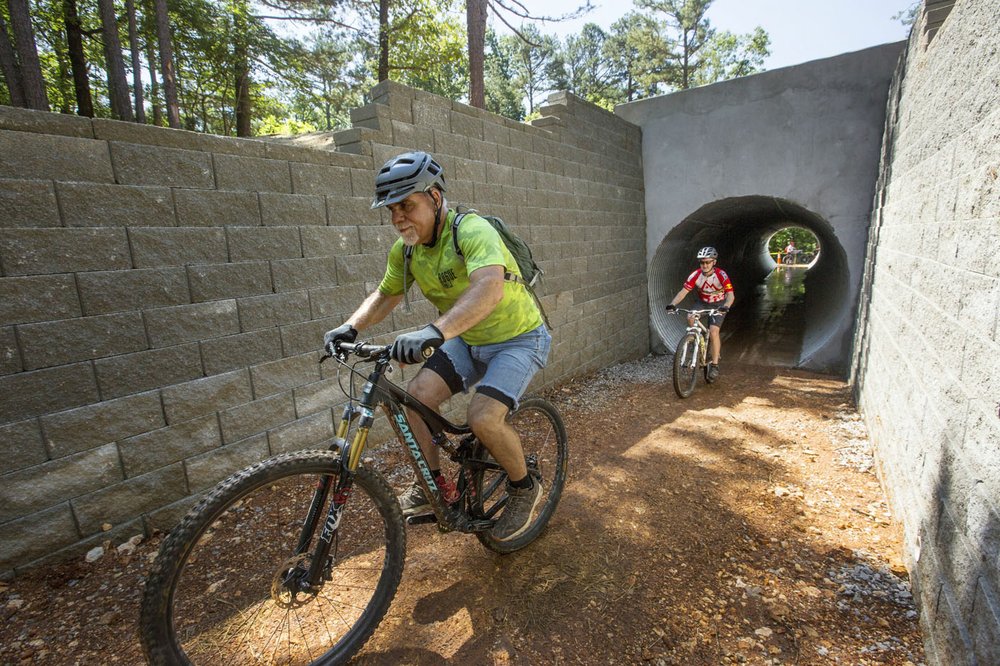 NWA Democrat-Gazette/BEN GOFF @NWABENGOFF Steve Schneider (left) with Rogue Trails leads a group ride, including Patrick Haines of Santiago, Chile, as they pass through the tunnel under Arkansas 12 during the grand opening June 8 of the Monument Trails at Hobbs State Park - Conservation Area near Rogers. The trail is the first in the country, as far as Suzanne Grobmyer's research revealed, to have a soft-surface-to-soft-surface tunnel under a highway as part of the trail system. Grobmyer is the executive director of Arkansas Parks and Recreation Foundation, the nonprofit that developed the new world-class sustainable trails.

Just as they said, in many places, the trail looked like it had always been a part of the landscape. The areas where it didn't are already starting to bloom with new and re-planted vegetation and soon will be less discernible to the eye.

Much of Hobbs' new trail meets the International Mountain Biking Association standard for a "green" trail -- a trail for beginners. For newbies like me, it will still be a slight physical challenge, but if someone who's never been mountain biking in her life (me) can make the journey, certainly anyone can. And that's the objective of this whole endeavor. Families, Grobmyer points out, are the visitors a park wants. These trails cater to that knowledge, and are open to hikers as well, while also providing the thrills, shreds and unique track locales experienced riders crave.

We didn't visit any of those areas of the trail on our outing. We stuck to one of the green loops that runs along Beaver Lake. I'm glad for the natural points in the trail that make it easy to stop and take in the scenery because, as an inexperienced rider, I couldn't afford to let much attention slip from keeping my front wheel on the roughly 18-inch path in front of me. I'll admit with as nerve-racking as I found the ride to be at times -- I mean, I'm on the side of a mountain on an 18-inch path with rocks and trees and the lake down below, plus wobbly balance! -- I was completely surprised to experience the calm that washed over me once I started to get a handle on the bike. And Chambers offered the perfect explanation:

"Your ability to get lost in the landscape is greatly enhanced," she says of the trail. "In Northwest Arkansas, there's a lot of trails, and it's great. But you're constantly making a choice. Right, left. Right, left. This trail, that trail.

"With this loop, you can just pedal. There's not offshoots; there's not different choices that you have to make. You can just be totally immersed, not worried about where you are. There's no interruptions; there's nothing that's going to take your attention away from just focusing on riding the trail, which is really unique to this trail system. You're not thinking about your day or what your boss said or what you're going to have for dinner -- you're just focused on that. You're really connected to the landscape with this trail."

And, you know, despite somewhere in my brain knowing about deadlines and the drive back from Hobbs and the dinner I had to plan and trying to come up with how to format this story, for a couple hours on a beautiful Friday, all that faded away as I just focused on keeping two wheels on a trail. And I'm pretty happy that the opportunity for that exists in my neck of the woods.