In talks for director, Little Rock housing authority board says 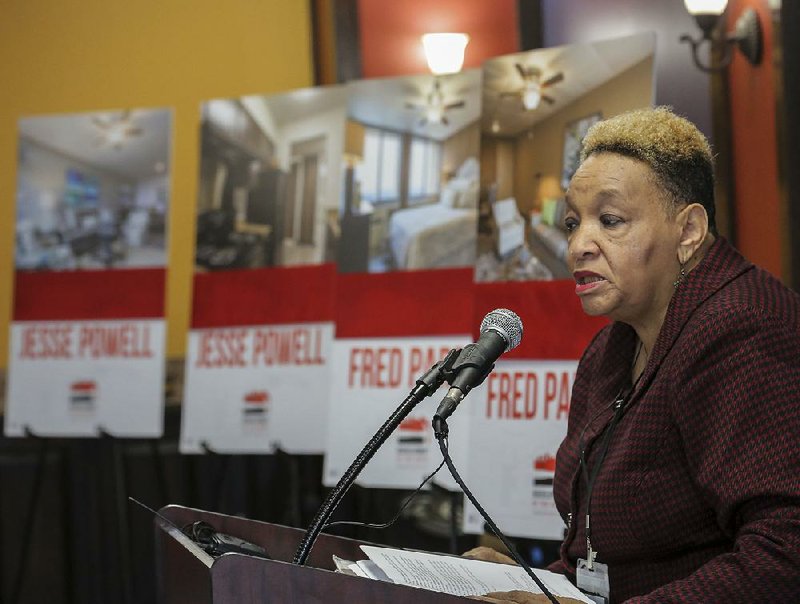 Leta Anthony, chairperson of the board of the Metropolitan Housing Alliance, sis shown in this file photo.

The board of commissioners for the Little Rock housing authority announced Thursday that it will begin negotiations with a finalist to fill its executive director position.

The board will soon start contract negotiations with Nadine Jarmon, the executive director of the Deerfield Beach Housing Authority in Florida, said Chairman Leta Anthony in a regular meeting Thursday.

Anthony told the Arkansas Democrat-Gazette after the meeting that the vote occurred during an April 12 special meeting, but no such vote is included in a recording of the meeting provided to the newspaper under the state's open-records law.

The meeting Anthony referred to included a private session, referred to in the law as an executive session, and a brief public session during which the board voted to accept the resignation of former interim director Marshall Nash and appoint Ilana McKinney, a human-resources staff member, as the special adviser to the board, according to the recording.

The law allows governing bodies to go into private session to discuss certain matters including hiring an employee.

In an interview after the board's May meeting, Anthony also told a reporter that no executive director had been selected, pending contract revisions.

Anthony did not return emails or phone calls requesting recordings or minutes that reflect the vote she referenced.

The Metropolitan Housing Alliance has been without an executive director since former Director Rodney Forte resigned in November. He asked to stay through Jan. 31, but the board voted to push him out that day.

Forte was with the agency for six years and made $133,000 annually.

Jarmon was one of three finalists for the position.

Anthony said in an interview that the board selected Jarmon because of "her experience, her education, her ability.

Reached by phone, Jarmon said she thought it would be "premature" to discuss further plans for the Little Rock authority because she hadn't discussed the offer with board members yet.

"They haven't told me yet, but that's good to know," she said.

Jarmon said in a previous interview that she hopes to help the Little Rock housing authority build partnerships with other local agencies. She said she works closely with city officials to administer Community Development Block Grants in Deerfield Beach.

She also said she hopes to help the agency expand through federal programs and any other chances she finds as she learns more about the agency.

"Little Rock is a dynamic city," Jarmon said. "It has a lot going on, and there's a lot of opportunities for growth in the housing authority."

The program began under former President Barack Obama and has expanded under President Donald Trump's administration.

The five board members ranked candidates on a scale of one to four in housing experience, leadership experience, length of time in previous jobs, community inclusion/involvement and accomplishments, according to a document Anthony provided to the newspaper.

Much of the interview process for the candidates occurred in meetings that tested the public records law.

When the board selected the finalists March 21, members went into executive session on the second floor of the building, although the meeting was on the first floor.

When members returned to the meeting, Anthony announced that no action had been taken. But when questioned by a reporter after the meeting, she listed the top three candidates. She added that selecting them didn't make up the meat of the session, and that there wasn't an official vote.

"This was just a conversation," she said at the time. "Really, it wasn't official. It wasn't a major piece. It was just a thing that was asked as we were walking through the door."

When the candidates came in to meet with board members and staff, these gatherings occurred on the second floor of the housing authority, and a reporter was barred from being on the floor. Board members did not call for a private session, referred to in the law as an "executive session."

These gatherings went on for several hours during two days in April. During the first day, only a handful of news outlets received notice about the meeting. Many reporters and news outlets that had requested it were not included.

Board members met with Kimberly Adams, another candidate, for about seven hours in private and discussed the meeting for about 40 seconds in public.

Meetings with Jarmon also occurred in private on the second floor.

Negligently violating the Freedom of Information Act is a Class C misdemeanor. The board is self-appointing, subject to approval by the Little Rock board of directors and mayor.

On April 15, after the interviews, Mayor Frank Scott, Jr. tweeted that he had met with Anthony and instructed the city attorney to conduct a training on public records law for the board and staff at the housing authority.

"All involved in the field of public service should be accountable to the public, clear with its communications and transparent in its operations," Scott's tweet read. "This is our city's standard, and we will work with our partners to ensure the same is provided."

City Attorney Tom Carpenter said Thursday evening that the training has not yet occurred.

The Metropolitan Housing Alliance has a history of pushing the limits on the open records law. In 2014, Forte was charged with a misdemeanor and arrested for failure to comply with the act.

He and Nash attempted to charge the Arkansas Democrat-Gazette more than $16,000 to fulfill a public-records request. A jury acquitted Forte.

They meet often in executive session, usually citing personnel matters. Twice in the past year, they've met for hours on Saturdays and taken no action.