Amid trade unease, analysts split on which way they’ll go by Compiled by Democrat-Gazette staff from wire reports | June 14, 2019 at 1:45 a.m. 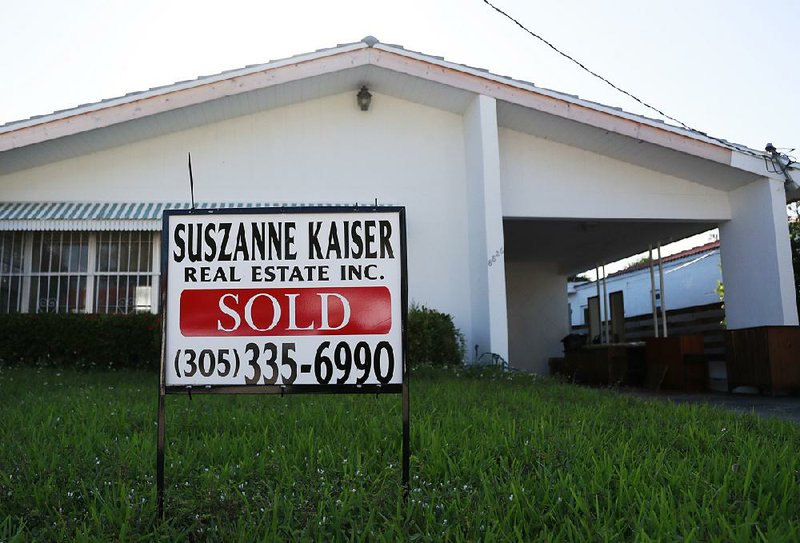 Freddie Mac reported little change this week for long-term mortgage rates on properties such as this home in Surfside, Fla., shown in April.

After more than a month of declines, mortgage rates paused their descent ahead of next week's Federal Reserve meeting.

According to the latest data released Thursday by Freddie Mac, the 30-year fixed-rate average was unchanged at 3.82% with an average 0.6 point. (Points are fees paid to a lender equal to 1% of the loan amount and are in addition to the interest rate.) It was 4.62% a year ago.

"Mortgage rates were flat this week, remaining near their lowest levels in more than a year as some uncertainty surrounding trade tensions appeared to ease," said Matthew Speakman, a Zillow economist. "But the near-zero net change does not do justice to the bumpy ride rates took over the past seven days. Friday's underwhelming jobs report sent rates skidding lower, continuing their weeks-long downward trajectory towards long-term lows."

Freddie Mac -- the Federal Home Loan Mortgage Corp. -- surveys lenders across the country between Monday and Wednesday each week to compile its mortgage-rate figures.

A reprieve for nervous stock-market investors came this week in the U.S. dispute with Mexico, as the two sides reached a truce Friday after Mexico agreed to do more to stop the flow of Central American migrants into the U.S. By Monday, however, President Donald Trump was again threatening to impose tariffs on Mexican exports if Mexico didn't abide by an unspecified commitment "to be revealed in the not-too-distant future."

The U.S. trade battle with China also continues to fester. The retaliatory tariffs threaten to stifle economic growth in the U.S. and around the world. Investors have been mostly fleeing to safer investments, such as bonds and gold, because of the uncertainty around trade negotiations.

The yield on the 10-year Treasury, which started the month at 2.07%, rose to 2.15% on Monday but pulled back to 2.13% on Tuesday. Mortgage rates are closely tied to the movement of long-term bond yields.

"Bond markets remain attuned to the fact that mounting risks to the global economic outlook -- specifically the enduring trade tensions between China and the U.S., Brexit and low expectations for the pace of inflation -- may motivate the Federal Reserve to cut the federal funds rate at least once this calendar year," Speakman said. "As a result, it's unlikely that major rate movements will occur ahead of next week's [Federal Open Market Committee] meeting, though Friday's retail sales data release could move the market if it shows some surprising results."

Bankrate.com, which puts out a weekly mortgage rate trend index, found that experts it surveyed were divided on where rates were headed.

"With lower inflation numbers and even talk about Fed cutting rates later this year, mortgage bonds will continue to get a boost," he said. "Expect the rates to trend lower this week, albeit not significantly."

"Trade talks continue to influence the markets," Rose said. "In addition, inflation continues to remain tame, which is good for mortgage rates. However, this recent rally has slowed and could come to an end soon. Mortgage bonds are in a range that could keep mortgage rates relatively unchanged for the coming week."

Meanwhile, low rates fueled a spike in mortgage applications. According to the latest data from the Mortgage Bankers Association, the market composite index -- a measure of total loan application volume -- increased 26.8% from a week earlier. The refinance index shot up 47% from the previous week to its highest level since 2016. The purchase index jumped 10%.

The refinance share of mortgage activity accounted for 49.8% of all applications.

"Mortgage applications surged last week, with refinance and purchase activity both showing impressive weekly and year-over-year gains," said Bob Broeksmit, association president and CEO. "Rates are now considerably lower than they were a year ago and are increasing the purchasing power for this summer's prospective homebuyers. This is good news, considering that low supply levels -- especially for first-time buyers -- are still putting upward pressure on home prices and overall affordability."

"Credit supply increased 2% in May, driven by the fifth straight gain in the jumbo index, which was up 7% and surpassed last month as the new all-time survey high," Joel Kan, an association economist, said in a statement. "The conventional index continues to grow, while the government index has generally been lower this year. Government credit supply continues to decline since peaking in 2017, as there are fewer streamlined refinance programs being offered."

Information for this article was contributed by Kathy Orton of The Washington Post and by staff of The Associated Press.