The Arkansas Racing Commission on Thursday gave the go-ahead for the Quapaw Nation to build a casino in Pine Bluff and approved Oaklawn Racing Casino Resort's bid for sports betting, but rejected five applicants vying for a Pope County casino license.

The commission also unanimously approved returning the full $250,000 application fee paid by each of the rejected applicants. Legally, the commission could have kept half the fee if it chose to do so.

Downstream Development Authority of the Quapaw Nation -- which was the only applicant for the Jefferson County casino license -- told the commission that construction would begin that day on Saracen Casino Resort, the proposed $350 million casino project near The Pines Mall in Pine Bluff.

"I'm elated and exhausted," John Berrey, chairman of the Quapaw Nation, said in an interview after the meeting. "I'm really happy for Jefferson County and the people of Jefferson County. It's really good for my tribe, my people. I heard they were watching it on TV. They're all excited."

The commission unanimously voted to reject five applicants -- Gulfside Casino Partnership out of Gulfport, Miss.; Tri-Peaks Entertainment Group of Las Vegas; Choctaw Nation of Durant, Okla.; Cherokee Nation Business of Catoosa, Okla.; and Kehl Management of Dubuque, Iowa -- for the Pope County license because none had letters of support from local government officials. 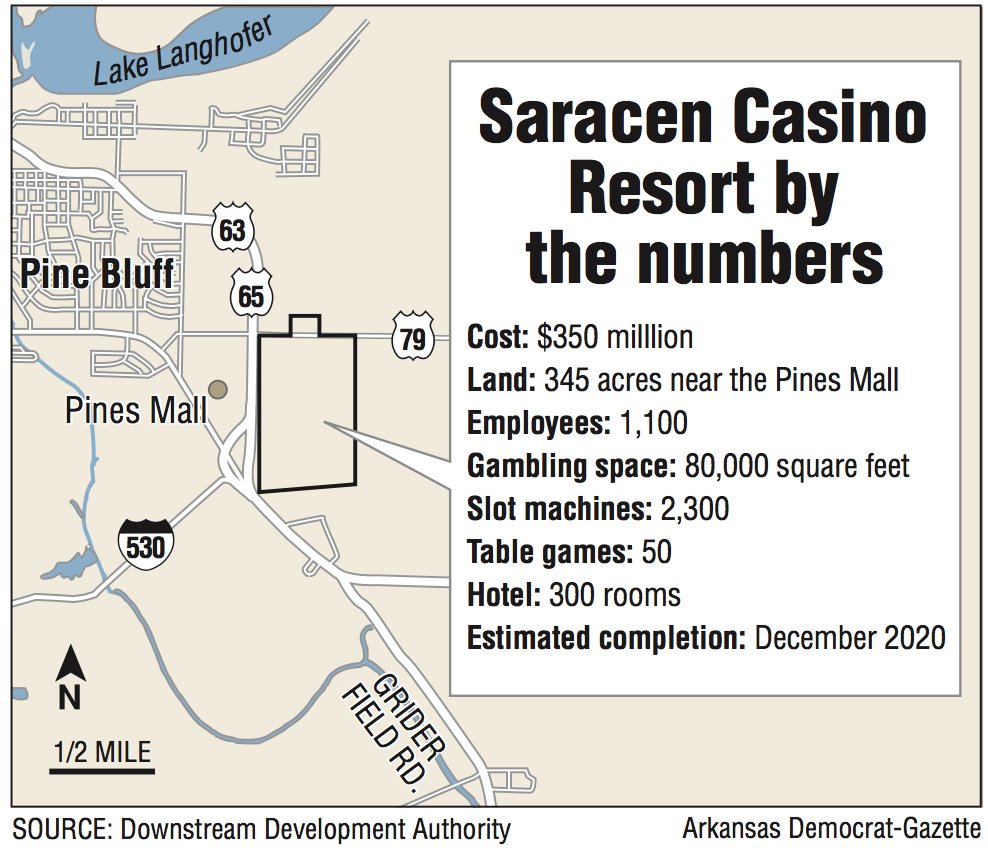 Saracen Casino Resort by the numbers

The Racing Commission also ruled earlier this year that the endorsements can come only from officials in office at the time the application is submitted. The Legislature also passed Act 371, which became effective in March, that requires that the letters of support come from current officeholders.

"It appears that none of the five applications meet those requirements," Freeland said. "The recommendation is that all five of these applications be denied as incomplete."

Gulfside attorney Casey Castleberry told the commissioners that the rule limiting the required endorsements is "not consistent with the constitution."

Castleberry has previously said the company would take legal action if its application was denied. In an interview after the meeting, Castleberry was less committal on the subject of litigation.

"Gulfside Casino Partnership is the only Pope County applicant that has complied with every requirement of Amendment 100," Castleberry said. "While we believe we should be granted a license, we will consider our options once we receive the written denial from the Arkansas Racing Commission with its rationale."

Ben Cross, county judge of Pope County, told the commission that members of the Pope County Quorum Court said at a public hearing Tuesday that they are considering a local election to gauge the support of a casino in the area.

Cross has been continually adamant that he will not support any casino interests in the county unless Pope County voters gave him the go-ahead.

"The Quorum Court has led me to believe they intend to move forward, on a timetable I do not know, and put in a version of this local option on the ballot," Cross said. "That has been discussed as being a special election, based on the March primary or even in the general election next November." Both the March and November elections will be in 2020.

Larry Walker, a citizen of Pope County, told the panel that he was at the public hearing and saw plenty of opposition to placing the issue on the ballot.

"With all due respect to the judge, I believe there is a clearer picture of what happened in that meeting," Walker said. "There were a lot of folks that spoke against a casino coming that night and not wanting to have to vote that ordinance at this point."

The Racing Commission voted to open the application process for 90 days if an applicant comes forward with the required letters of support for the Pope County casino license.

Berrey, the chairman of the Quapaw Nation, said the land purchased for the casino site included an existing gas station, which will close briefly for upgrades, then reopen to include an annexed gambling room with about 300 slot machines.

The whole project -- which includes a 300-room hotel, indoor and outdoor entertainment venues, restaurants and lounges, a spa and a museum and cultural center in addition to an 80,000-square-foot casino containing 2,000 slot machines and 50 gambling tables -- will take about 18 months from groundbreaking to grand opening and will generate about 1,100 jobs, Berrey said.

The 345-acre compound also will include an on-site health clinic and day care center for employees.

Also, on Thursday the commission approved the sports betting plans for Oaklawn Racing Casino Resort, which has the thoroughbred racetrack in Hot Springs, to begin July 1. Southland Gaming and Racing in West Memphis, the greyhound track, previously announced that sports betting will be offered, but has not yet submitted the required plans to the commission.

Jennifer Hoyt, media relations manager for Oaklawn, said sports betting will take place in the VIP racing area of the casino, located at the entrance to the racing area from the gaming floor.

Sports betting, or sports wagering, "allows customers to place wagers on nearly all sports from football to basketball to boxing," Hoyt said.

Oaklawn began offering live craps and live blackjack on April 1 while continuing to offer its popular slot games. The Racing Commission approved casino licenses for Oaklawn and Southland on March 23.

Construction is underway on a $100 million expansion Oaklawn announced in November that includes 28,000 square feet of additional gaming space. The expanded gaming floor is set to open before the 2020 live race meet.

Southland announced in January a $250 million expansion that would include a 20-story hotel and expanded casino area.

Information for this article was contributed by Beth Reed of The Sentinel-Record.