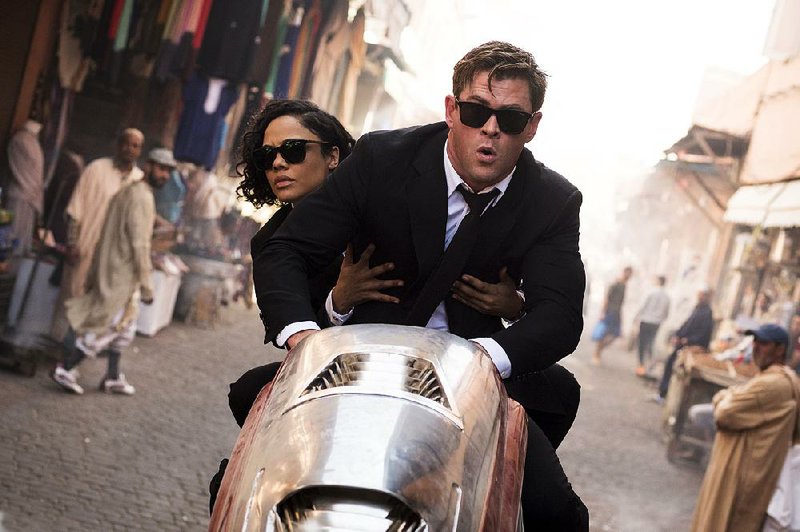 Agents H (Chris Hemsworth) and M (Tessa Thompson) are tasked with policing pesky space invaders in F. Gray Gray’s Men in Black: International, the fourth installment of the franchise that started in 1997.

Picking a favorite Men in Black sequel is like choosing between Larry, Moe and Curly. Although each has his merits, one still has to select a Stooge.

The novelty of the first film is completely gone, but nobody has bothered to tell that to anyone at Columbia. The scuzzy aliens who would pop up in unexpected places were a delight, but the primary joy of the first movie came from pairing Tommy Lee Jones and Will Smith. The former is so tightly wound and the latter so laid back that a movie simply featuring them teasing each other for 90 minutes would have been delightful.

Rating: PG-13, for sci-fi action, some language and suggestive material

Curiously, the first two sequels made the mistake of keeping them apart (sorry, Josh Brolin's eerily accurate impersonation of Jones isn't as funny as the real thing), and the new one, Men in Black: International, doesn't have them at all.

To be fair, pairing Tessa Thompson and Chris Hemsworth is a good start. The two read off each other like books in Thor: Ragnarok, but Matt Holloway and Art Macum's script concentrates more on recycling effects from the first movie instead of finding ways to maximize the duo's formidable chemistry.

Agent M (Thompson) is obsessed with aliens, having rescued one as a child, and eagerly wants to join MiB. Even though she aces qualification tests for the FBI and the CIA, neither will forward her name. One official named Agent O (Emma Thompson), however, takes a chance on her because M admits to having no life. The job is lonely and time consuming, so she'll fit right in.

Her partner H (Hems­worth) has an impressive record despite having a blase attitude about the job and a determination to sleep with more extraterrestrials than Capt. James T. Kirk. M's zeal and H's informality naturally lead to clashes, but most are simply an excuse to show off gigantic weapons and goofy-looking aliens.

When the two fail to stop an assassination attempt on a galactic prince, M discovers a small object that all of the malevolent aliens in the universe want to obtain. Their boss, High T (Liam Neeson), isn't sure whether to make the two forget they ever had their jobs or to help them keep the device out of the wrong hands.

There are still some delights to be found in this corner of the universe. Kumail Nanjiani is lovable and amusing as the voice of a minute creature named Pawny who helps keep M out of danger. Perhaps a little more time with him might have led to more laugh like the ones in the first movie. Rebecca Ferguson is also delightfully scummy as an arms dealer who doesn't seem to care where her merchandise goes. F. Gary Gray, who has directed a Fast and Furious movie and a surprisingly good remake of The Italian Job, is an old hand at action, but it's more fun to watch cars wrecking in interesting ways than it is to watch space vehicles that never quite seem real enough to take our heroes anywhere. 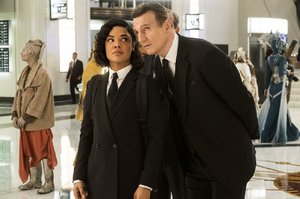