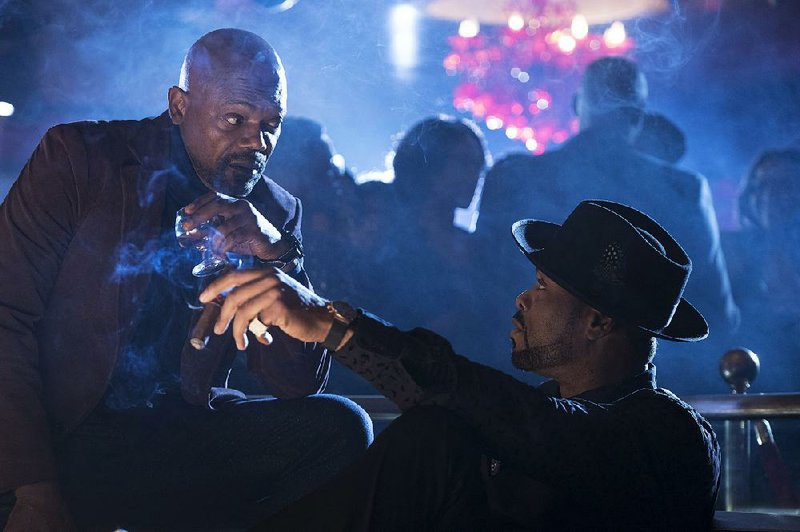 As the title character, Richard Roundtree brought Sidney Poitier-level intelligence and dignity to the screen, but he could also kick ass and have an active sex life. In movies like Guess Who's Coming to Dinner, Poitier had to prove he was worthy of affection and carnality. Roundtree already knew they were his, and he certainly enjoyed them. When he strutted through New York as if the deed to the city was in his wallet, it was impossible not to want to be him.

In 2019, Shaft is now a big-screen sitcom. Thankfully, it's a tolerable one. As he demonstrated nearly 20 years ago, Samuel L. Jackson fits comfortably into Roundtree's trench coats and turtlenecks even if his adventure, directed by the late John Singleton on an off day, was less than thrilling.

Veteran sitcom writers Kenya Barris and Alex Barnow turn Roundtree (Shaft 1.0) and Jackson (Shaft 2.0) into a sort of All in the Family or The Jeffersons with a body count. When he's not helping J.J. or Shaft 3.0 (Jessie T. Usher) solve the mysterious death of an Afghan war veteran named Karim (Avan Jogia), Shaft 2.0 spouts views on sex and law-and-order that might make All in the Family's Archie Bunker seem forward thinking.

Shaft 2.0 thinks that his offspring, whom he raised in an absentee manner, is selling out by working as an FBI data analyst. Where as the youngest Shaft is a sort of Nate Silver of crime fighting, his dad files paper documents in categories like "Puerto Ricans I Don't Trust."

Jackson leavens Shaft 2.0's retrograde ideas with his unique way of delivering profanity. It's hard not grin when he bellows his favorite synonym for incest. Shaft 2.0's ruthless approach to neutralizing crime and the drug trade upsets his straight-laced son, but to his credit, the younger Shaft is a fast learner and can skillfully inflict fatal injuries even if he resents the process.

Speaking of resentment, Regina Hall is sadly underutilized as Shaft 2.0's ex-wife. It would be a treat to have Hall, who was terrific in last year's Support the Girls, bickering with Jackson and being overprotective with Usher. Roundtree doesn't show up until later in the film, but he has a far more active role as Shaft 1.0 this time. Watching him scold his offspring is amusing, and it's great to see the actor who turns 77 next month neutralizing bad guys like he used to.

Director Tim Story (Barbershop, Ride Along) treats the proceedings with an escapist tone. Harlem looks gritty, but it's more a backdrop for shout outs to the previous movies than a factor in the story. On second thought, much of the humor comes from proving that Roundtree's old heroics are harder than he made them look and that it's time to stop mistaking Jackson's distinctive looks and voice for those of another famous thespian. Jackson is too close to Roundtree's age to pass as another generation, but the two manage to feud nicely.

Director Gordon Parks helped make the original Shaft and its follow up Shaft's Big Score more than time capsules. It didn't hurt that he had previously worked as a photojournalist and had an eye for striking, cost-effective visuals.

Story clearly isn't aiming for posterity with this one, but simply telling a dirty joke successfully seems like a lost art.