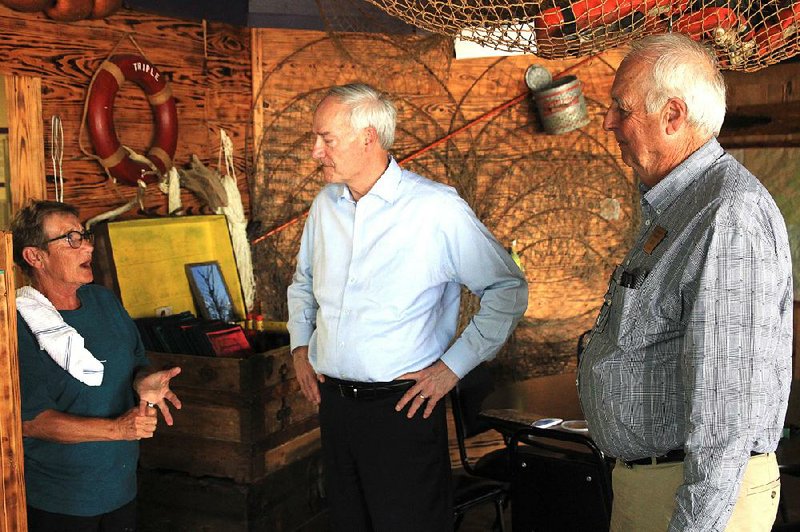 Peggy Hill (left), co-owner of the Triple P Restaurant, describes to Gov. Asa Hutchinson (center) and Desha County’s county judge, Richard Tindall, how customers helped raise the bar, pool table, jukebox and other furniture in the restaurant before it was flooded. ( Dale Ellis)

PENDLETON -- Four additional Arkansas counties have been approved to receive federal aid after major flooding along the Arkansas River, according to a spokesman for the governor's office.

That raises the total number of Arkansas counties qualifying for federal assistance to 12. The counties of Conway, Crawford, Faulkner, Jefferson, Perry, Pulaski, Sebastian and Yell were approved previously.

Davis said the public-assistance funds to help rebuild roads, bridges and other infrastructure damaged by the flood will take longer to sort out.

"We still have to assess public infrastructure damage and then we'll access those federal funds to begin rebuilding those," Davis said.

Accompanied by Tina Owens, deputy director of the Arkansas Department of Emergency Management, Hutchinson flew Friday to Desha County and met with County Judge Richard Tindall; state Rep. Don Glover, D-Dermott; and residents of Pendleton who are in the early stages of cleaning up the mess left behind by floodwaters.

Hutchinson's first stop in the rural southeast Arkansas community was the Triple P Restaurant, where he greeted Peggy Hill, the restaurant's co-owner, with a remark that the business looked just about ready to reopen.

"We didn't get but about 8 inches of water in here," Hill told the governor. "We came in last Saturday planning to pour bleach in the water to keep the mold down, but when we opened the doors the water ran out. So we got water hoses, squeegees and brushes and we went to sweeping the mud out."

After a week of cleaning, Hill said she was planning to open back up for business later Friday afternoon.

Hutchinson explained to Hill how residents, business owners and homeowners can access federal assistance under the disaster declaration.

"FEMA will be on the ground here," he said. "They'll have a response center, a recovery center here where people can put in their information and get approved for some assistance as they try to get back in. So I hope that you can give people some confidence that both our emergency management people are working on it as well as the government."

Hill told Hutchinson that she would pass along his message.

"I'll tell everyone that I talked to you and that if you need it, it's going to be there," she said. "Just be patient and there'll be people there to help you. We've just got to go with it now." 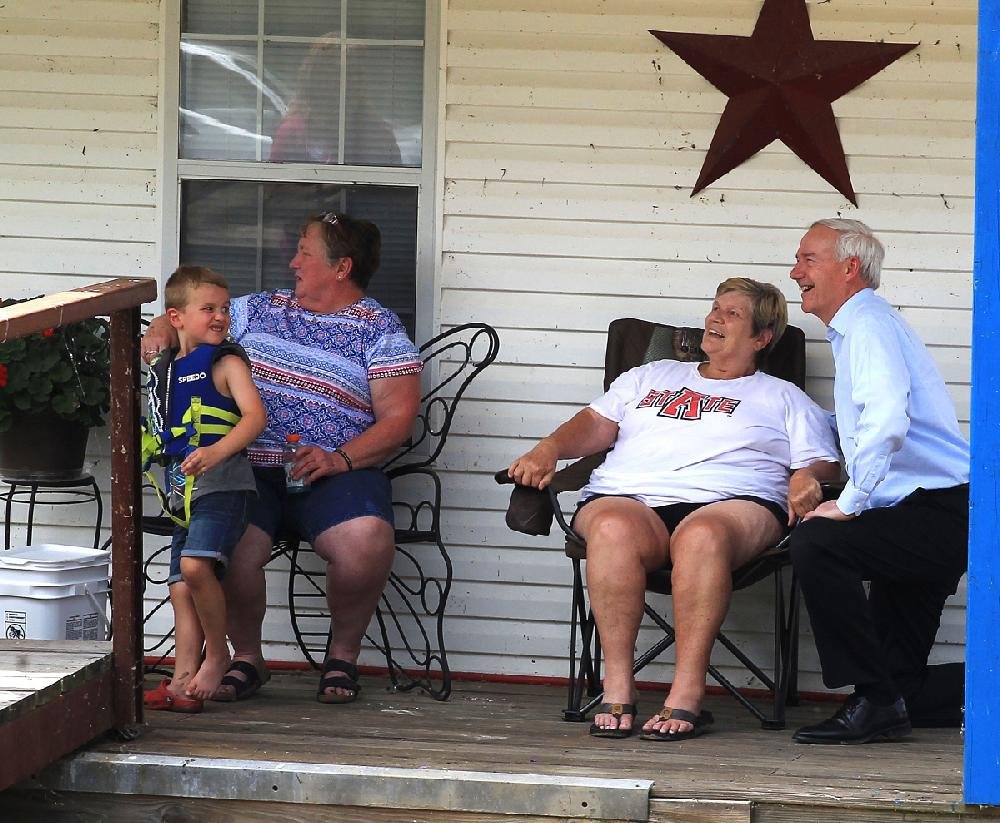 Gov. Asa Hutchinson (right) visited with Pendleton residents Friday and assured them that federal help is on the way to help the community to recover from the recent flooding.

Hutchinson said later that seeing the restaurant reopen so quickly after the waters receded is an important symbol for the community.

Hutchinson also toured the home of Frances Hill, another Pendleton resident who was beginning her cleanup. Ruined appliances and furniture sat outside in the sun while fans sent air rushing throughout the structure to dry out flooring.

Sheetrock had been cut out to a height of 4 feet, revealing the bare studs with wiring and outlets exposed.

Hill said later that she has no intentions of leaving the area.

"This is home to me," said Hill, who has been staying with her son. "I've been here for 20-plus years, and I don't plan to go anywhere. I'll just rebuild. This is just one of those freak things."

Owens said emergency management personnel had traveled all along the Arkansas River assessing damage and getting an up-close look at the devastation from floodwaters released from Oklahoma and southern Kansas. Among the hardest-hit areas Owens mentioned were Pendleton, Fort Smith, Perryville and areas of Faulkner and Jefferson counties.

"It's just a historic flood," she said.

While damage to homes is being revealed more each day, Owens said it still will be some time before officials can assess all the infrastructure damage.

Owens said the effects of the flooding likely will be felt well into next year.

"Infrastructure alone, as everyone is aware, takes so long to rebuild," she said. "So just trying to come back to that, as far as infrastructure is concerned, will take awhile."

"I'm hopeful that a lot of our people had flood insurance so they're able to get back with that," Owens said. "So through their insurance proceeds and with the help of our voluntary organizations like American Red Cross and others, and then the help of FEMA coming in, I'm hopeful that those things will bring our citizens back to where they need to be."

Hutchinson said more than 500 homes in Arkansas already have been entered into the system and approved for federal disaster aid through the Federal Emergency Management Agency.

"What we've seen here just typifies what over a thousand Arkansas residents are facing as they go back to their flood-damaged homes," he said. "They're having to rip out the carpet, the flooring, the walls. They're having to dry out the homes and go through repairs."

Tindall said he appreciated Hutchinson visiting Pendleton to personally view the damage and talk to residents.

"It was important that he come here himself and tell people that help is coming," the county judge said. "The folks here needed that." 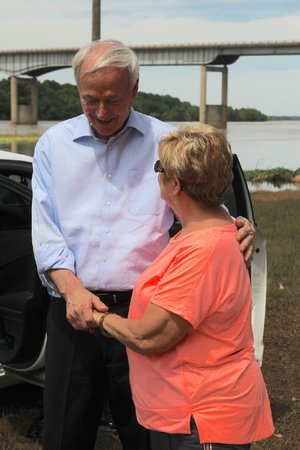 Photo by Dale Ellis
Gov. Asa Hutchinson comforts Frances Hill, a resident of Pendleton, on Friday during a tour of flood-damaged areas in Desha County. Hill’s home was inundated in more than 5 feet of floodwaters from the Arkansas River. 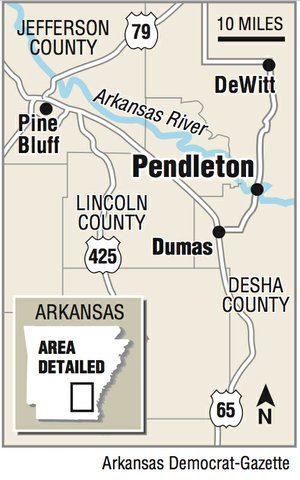 A map showing the location of Pendleton.