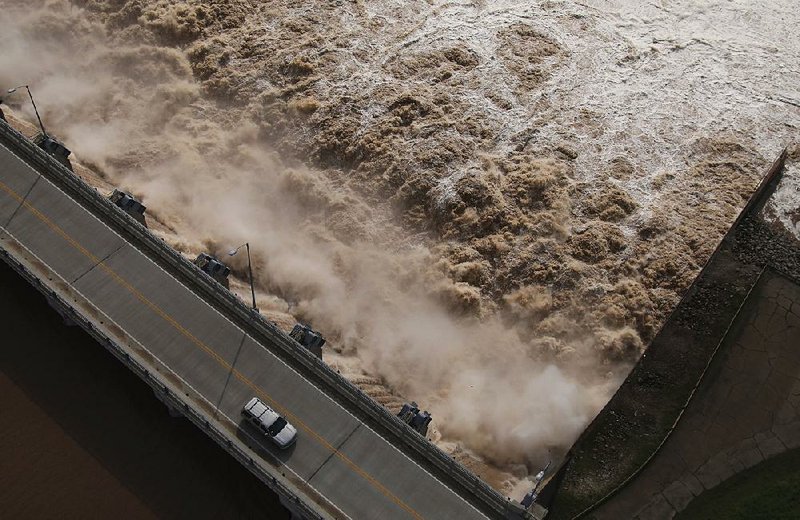 Excess water pours out of the dam on Keystone Lake northwest of Tulsa on May 24. The U.S. Army Corps of Engineers released millions of gallons of water from rain-swollen Oklahoma reservoirs into the Arkansas River, causing severe flooding in Arkansas. Gov. Asa Hutchinson is calling for a review of how the release was handled.

As his office begins assessing and repairing the damage left by historic flooding along the Arkansas River, Gov. Asa Hutchinson said he wants federal officials to review the management of water flows that caused devastation across Arkansas.

Hutchinson said he hopes the U.S. Army Corps of Engineers will complete an "after-action review" of the weeks leading up to the release of millions of gallons of water in Oklahoma that destroyed and damaged homes and infrastructure across Arkansas.

"We've got to look at our coordination with the [U.S. Army] Corps in Oklahoma," Hutchinson told the Arkansas Democrat-Gazette last week. "I think the presumption is they've managed it well in terms of water flow, but the fact is, they're managing the water in Oklahoma for flood control and recreational purposes. Was it managed in the right way to balance the flooding results across Oklahoma and Arkansas?"

Laurie Driver, a spokesman for the U.S. Army Corps of Engineers in Little Rock, said controlling water flow is a complicated process and engineers had no choice but to release the floodwaters after rains filled and overfilled flood-prevention reservoirs in Oklahoma.

Nathaniel Keen, chief of water management for the Corps in Little Rock, said the Corps intends to complete an after-action review on the Arkansas River flooding and that the report will be released to the public. Keen said the review likely will take a year.

An after-action review is a mandatory assessment of any event above a certain threshold with the intention of identifying the strengths and weaknesses of the Corps' response strategy, said Jim Marple, an emergency management planner with the Corps.

The report will be sent to the Corps' regional office before it is released to the public, he said.

Driver said to understand the release of the water from the Oklahoma flood-prevention reservoirs, one needs to understand how much rain Oklahoma received.

"In the last 180 days, the White River Basin received 25 to 50 inches of rain," Driver said. "Sixty percent of that watershed are below our dams, so there's uncontrolled runoff. We kept waiting for that dry time so we can make water releases. If you get 3 to 4 inches [of rain] every week, the level stays up."

Driver said the Corps' water-release strategy is dictated by the congressionally approved water-control plan, which forced it to release water ahead of an influx of water to Keystone Lake in Oklahoma.

"They only let out, with this flood, as little as they could to keep their lakes from topping," Driver said. "If those dams hadn't been there, this would have been a lot worse."

Corps Hydraulic engineer Matt Moix identified heavy incoming rain May 21 from a weather forecast as a potential threat to the filled reservoirs, and Keen said his office began notifying people of the danger.

"The first call I made was to our public affairs office, then to our emergency management office, and my third call was to my wife to ask her to cancel all of our social engagements for the next few weeks," Keen said. "It was a very busy day for all of us."

Keen said he made more than 20 phone calls that day about the coming flood.

"I usually finished most calls with something like: 'Tell everyone you know. We are putting out press releases, social media posts, and calling people but that isn't enough. We need your help. Spread the news to your friends and enemies, this will be historic,'" he said.

Hutchinson said that when his office was first notified of the water releases, he knew the event would be historic. 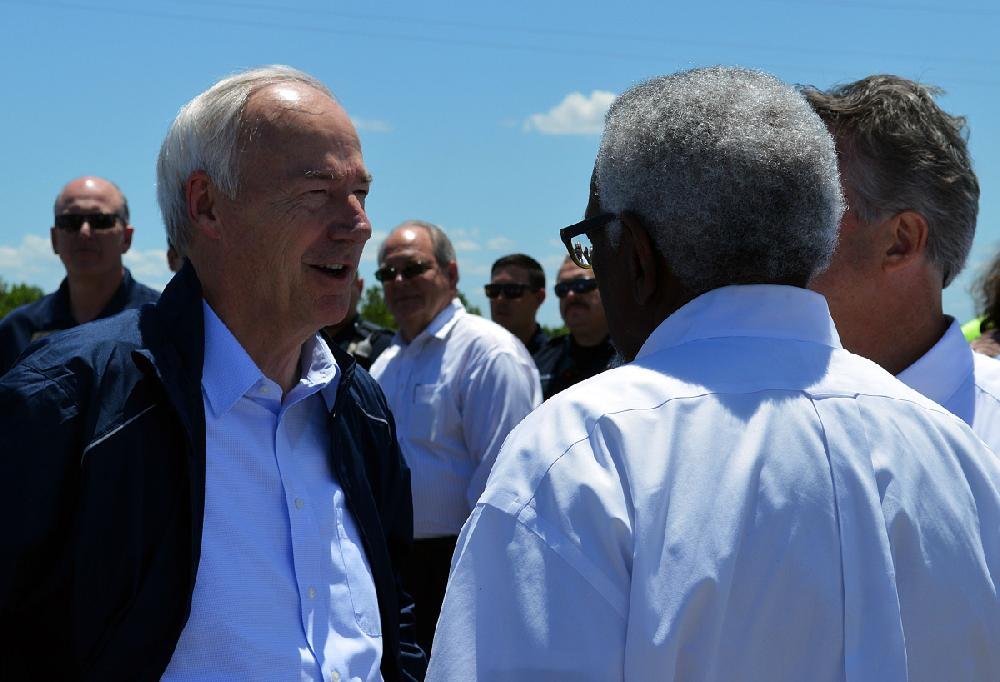 Gov. Asa Hutchinson talks with residents before a May 30 news conference on flooding in Fort Smith. Hutchinson said he met with many Arkansans as he viewed the flood damage and that he found their spirit of determination and helpfulness inspiring.

"They said they were going to have to be moving water in quantities we've never seen before down the Arkansas River, and to be prepared," Hutchinson said. "He was actually speaking of whether we should have mandatory evacuations. That conversation gets your attention."

Hutchinson said he met with the Arkansas Department of Emergency Management to get the operations center fully manned and ready.

"A.J. Gary did an amazing job with that, with having every agency of state government and the relevant federal agencies all there simultaneously working together," Hutchinson said.

Then Hutchinson began coordinating and deploying the National Guard and rescue teams while ensuring federal officials were aware of the situation in Arkansas.

"I think our [disaster] declaration went through so quickly -- and it did go through in record time -- because the president was briefed early on what was happening here," Hutchinson said.

On June 8, President Donald Trump approved Hutchinson's request to declare a major disaster in Arkansas fewer than 24 hours after the governor made the request.

As rising waters on the Arkansas River began to crest, however, Hutchinson said he needed to get out to see the flood and talk with residents affected by flooding.

"The reason it's important is to be able to provide credibility to our assessment of damages whenever I requested a disaster declaration from the president," he said. "It makes a difference when I've seen it and observed it. So, I was there in Van Buren and of course in Toad Suck and that area around Lollie Bottoms there."

Hutchinson said he met church members who had canceled Sunday morning services to fill sandbags in Dardanelle. He saw the creek that normally drains Lake Conway running backward from the Arkansas River, putting a levee in danger of breaching. He flew over inundated areas and saw the damage to homes, businesses and infrastructure.

And he met people. Many, many people, he said.

"In the Conway area, there was a homeowner who knew the home is sometimes flooded," Hutchinson said. "They had a pattern of going to a neighbor's home at a higher elevation. The only problem is, this flood covered the homeowner and the neighbor's home both."

A farmer asked if the governor could help him feed his cattle, which were surrounded by water in a field. National Guard troops used a helicopter to fly out 1,000-pound round bales to the cows the next day.

"You sequence your operations so that you protect life, protect property and the animals that are out there and impacted as well," Hutchinson said. "I was happy we were able to help him."

As often as he met people who were devastated by flooding, Hutchinson said he was just as likely to meet people who had rushed to the aid of their neighbors.

"It's inspiring," Hutchinson said. "You see football teams and grandmothers and grandsons all pitching in. While it's such a terrible, tragic circumstance we're going through, at the same time it's a learning experience for a new generation to see what it means to help a neighbor, to give of themselves. That has value. It brings, even in difficult circumstances, a community together."

As the flooding began to recede, Hutchinson said his office has been urging people to report damage and record their losses so that FEMA and others can help them.

"That's what we're going to learn more about every day as the water recedes," Hutchinson said. "As people are getting back to their homes and go back to their farms, they're going to see damage they either didn't know about or the magnitude is greater. The key thing is everybody needs to report the damage and have it assessed appropriately."

Hutchinson said the amount of damage that has been done to the state's infrastructure grows every day as water levels normalize and assessors can inspect roads and bridges.

"The embankments, the many places that've been eroded, the cost of that will be significant to repair," he said. "The farms, that's where you really hurt for the farmer. The first question is, once the farm dries out, is it too late to plant another crop with the damage from the silt?

"In previous experience, my experience as governor, they've been able to replant. Here, with the damage from the flood itself to the farm, replanting is a greater question.

"That's something we can only measure in time."