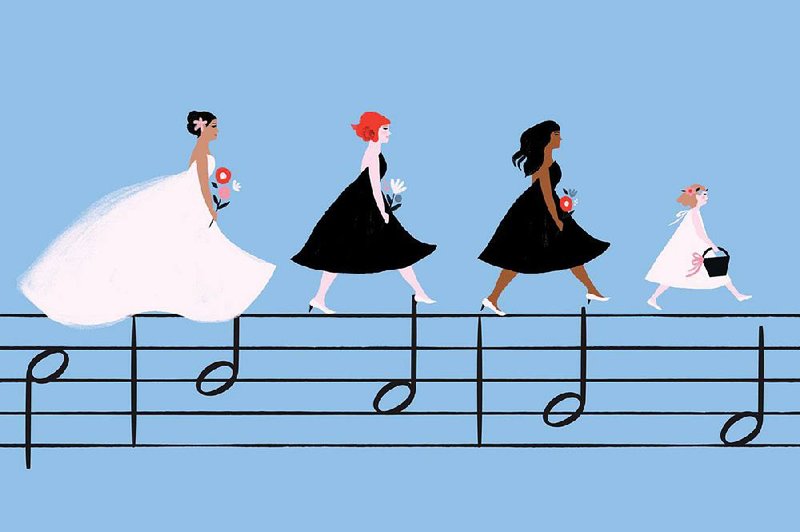 Johann Pachelbel’s classic Canon in D major, a composition that shares elements of “Row, Row, Row Your Boat,” remains a perennial for brides and grooms, even though it was never intended to be.

As wedding traditions evolve, it becomes increasingly common to walk down the aisle to sappy, chart-toppers by Ed Sheeran or wistful acoustic covers of classic rock hits. But Johann Pachelbel's Canon in D major, a composition that shares elements of "Row, Row, Row Your Boat," remains a perennial.

It was never intended to be.

How the singular piece of centuries-old classical music has transcended time and geographies to secure its status as one of the most popular wedding songs in Western society is a story where pop culture, music theory and imagination converge.

When and where Pachelbel's Canon originated, and why exactly he composed it, is largely a mystery to music historians.

It dates to the late-17th or early 18th century, and there's speculation that it was written as a gift for the wedding of Johann Sebastian Bach's older brother, with whom Pachelbel studied. Some musicological research claims it couldn't have been composed before the 1690s, according to Elaine Sisman, a professor of music at Columbia University. Other hypotheses suggest that stylistically it could have come at any point in Pachelbel's career (he lived from 1653 to 1706).

Whatever the circumstances, what is widely considered the oldest existing manuscript of the piece is a 19th-century copy in Germany at the Staatsbibliothek zu Berlin, or Berlin State Library. And what many scholars can agree on is that from there -- long before Pachelbel's Canon would come to be a wedding sensation -- it would fall into obscurity for hundreds more years.

"Pachelbel was pretty much nowheresville in performance," Sisman said, until, she added, a modern edition of the sheet music was published in the 20th century, a period of rediscovery for baroque music, including that of Pachelbel and Vivaldi.

"The early 20th century was the era of getting early music out and figuring out how to transcribe it and who could play it," Sisman said. "There was also a big early music revival starting in the 1950s with Noah Greenberg and the New York Pro Musica, and suddenly, you had performances and recordings and people trying to figure out how this music actually came to be."

NOT A WEDDING SONG

But even then, Pachelbel's Canon was still definitively not a wedding song. Go-to works by Richard Wagner and Felix Mendelssohn, on the other hand, were explicitly bridal marches.

Although "Here Comes the Bride" are neither the original lyrics nor the real title for Wagner's Bridal Chorus, the tune (often used for the processional) comes from his 1850 opera, Lohengrin, in which the wedding is a beautiful moment amid drama and tragedy. Likewise, Mendelssohn's Wedding March from the same period (often used at the end of the ceremony) comes from A Midsummer Night's Dream. Pachelbel's Canon, by comparison, is without text or context.

What prompted the melody's meteoric rise was a 1960s recording by French conductor Jean-François Paillard.

"This thing became really popular -- just as a thing of popular music -- from that recording," said conductor Kent Tritle, the director of cathedral music and an organist at the Cathedral of St. John the Divine in New York.

Sisman also noted that "the Paillard got really famous because it's so dreamy, twice as slow as everything else, over seven minutes long, with upward arpeggios that send you into a dream."

The piece shot to even greater stardom in 1980 as the theme song and opening track in Ordinary People, a film starring Mary Tyler Moore, Tim Hutton and Donald Sutherland and directed by Robert Redford that won several Academy Awards, including for best picture.

"That was a big deal," Tritle said. "That became the quick handy reference."

And yet, Pachelbel's Canon was still not a wedding song.

What finally catapulted the song to matrimonial fame was Prince Charles and Princess Diana's fairy-tale wedding in 1981. The royal couple did not use Pachelbel's Canon, but they did use a baroque processional -- Prince of Denmark's March by Jeremiah Clarke -- drawing sudden, far-reaching attention to other baroque composers like Pachelbel.

"When you start to have these big royal weddings, like Charles and Diana's, anything that was on their program was automatically right to the top," said Fred Fehleisen, a longtime wedding violinist in New York.

"There was a sense of pomp," Sisman said of the trumpets in Clarke's march. "It was a different kind of sound, and everybody really went for it."

But to some, Canon in D would resonate even more for weddings because trumpets were "more tada-ish," Sisman said, while the Pachelbel, on strings, had a more intimate-sounding aesthetic. "It really transcends cultures."

While the song's humble beginnings and sluggishly slow ascent might suggest it was never meant to be nuptial in nature, its DNA tells a somewhat different story.

Just as a piece of pop music can be engineered into a summer hit, certain technical elements lend well to wedding hymns.

It contains the most common, repetitive bass line (the low bum, bum, bum, bum at the beginning) from the 17th century, according to Clark. "Although this piece is famous," she said, "there are so many pieces built on the same underlying harmonic structure, at the time called a Romanesca as a pattern."

"Pachelbel Rant" by comedian Rob Paravonian, and "4 Chords" by comedy band Axis of Awesome, highlight dozens of recognizable songs with the same foundation as Canon in D -- including music by Lady Gaga, Bob Marley, John Lennon, U2, the Spice Girls and Green Day. ("Punk music is a joke; it's really just baroque," Paravonian said in the performance.)

"The way it's set up is that there's a repeated pattern that happens in the bass line -- you hear that, initially, by itself without the violins, and that unit is repeated 28 times in the whole piece -- and then you hear the violins come in one after another," Clark said. "The reason it's called a canon is because of what the three violins do in the upper voices: They play in a round." (Just as you'd hear in "Three Blind Mice" or "Frère Jacques.")

The resulting piece, alternating between fast and slow notes, two- and four-measure units, major and minor chords, is filled with complex harmonies that sound straightforward and simple. As with a lot of music in the baroque period, Clark said, once that range was established, the score could be amenable to many other instruments. Pachelbel's Canon was originally written for three violins, she explained, but it can easily be arranged for a string quartet or the organ, keyboard and synthesizers, all creating a different sound depending on the occasion.

"Musically, it just happens to be a piece that you can do pretty easily in almost any configuration you have," said Fehleisen, who has played hundreds of New York weddings since the 1970s. "You can do a million things with it."

It's also perfectly paced for walking down the aisle, Clark said, "and it feels timeless because there's no text. You're not guided to one single way of thinking about the piece, so it becomes meaningful for every individual or pair."

Tritle, who said he has played more than 2,000 weddings, added, "It works so well for weddings as a piece of functional music."

"You have this four-bar subject that goes over and over and over, and therefore, you can cadence at any time, so you have the perfect piece of music for however long a procession takes," he said. "You can play the whole thing, you can play the whole thing and cycle it right back, or you can play only part of it and still have a very fulfilling piece of music. That's always the problem -- how are you going to disrupt the music if the procession only takes 20 seconds, or a minute and 40 seconds? The Pachelbel Canon is an easy and tasteful answer to that; you're not violating the musical fabric so much by coming to a conclusion too early."

And whether intended or not, there's symbolism to that cyclical setup.

"To me, the bass line -- which is the canon -- is evocative of the universals spheres turning," Tritle said. "It evokes a sense of unstoppable motion, and yet, it also, in its way, can be very placid. And the variations that get spun over it are, in a way, three different voices: They're all the same voice each time, but it's very much like a human dialogue."

Sisman first heard the song on the radio in the late 1970s -- a Stuttgart recording -- from the back seat of a New York taxi.

She met her husband in 1980 and got married June 14, 1981, on Jane Street in the West Village. Accompanied by flute, violin and cello, they walked down the aisle to Pachelbel's Canon in D.