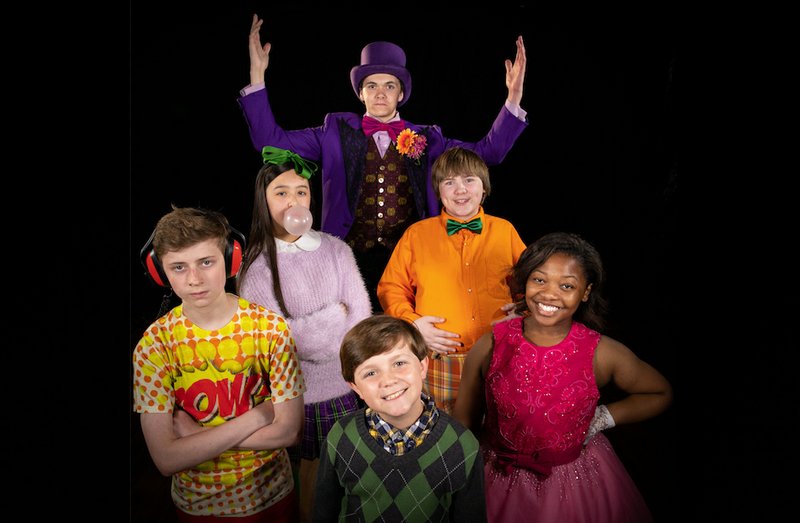 The cast of Willy Wonka Jr. at the Arkansas Repertory Theatre (clockwise from left): Corbin Pitts as Mike Teavee, Isabella Nguyen as Violet Beauregarde, Will Porter as Willy Wonka, Jacob Grinder as Augustus Gloop, Tania Kelley as Veruca Salt and Collin Carlton as Charlie Bucket. (Special to the Democrat-Gazette/CHRIS CRANFORD)

More than three dozen young actors are turning the Arkansas Repertory Theatre into a Dahl house.

The entirely local cast of 39 youngsters, age 10-17, is in final dress/technical rehearsals for the musical Willy Wonka Jr., featuring the songs by Leslie Bricusse and Anthony Newley that appeared in the 1971 movie Willy Wonka and the Chocolate Factory, and which was based in turn on Roald Dahl's children's classic Charlie and the Chocolate Factory.

The show opens Friday and runs two weekends, through June 30, on the Rep's downtown MainStage.

Enigmatic candymaker Willy Wonka (Will Porter), seeking a successor to his sweetmeat empire, sends forth five golden tickets, concealed inside his trademark Wonka bars, to bring five children into a tour of his factory with a promise of a lifetime supply of the candy made therein.

Guess who's destined to come out on top?

"This is the first in a long time that we've done a show with only students 18 and younger on the MainStage," says Anna Kimmell, who in addition to running the Rep's education program is the production's director and choreographer. Other summer shows involving Rep initiatives have featured students up to and including college age, she explains. 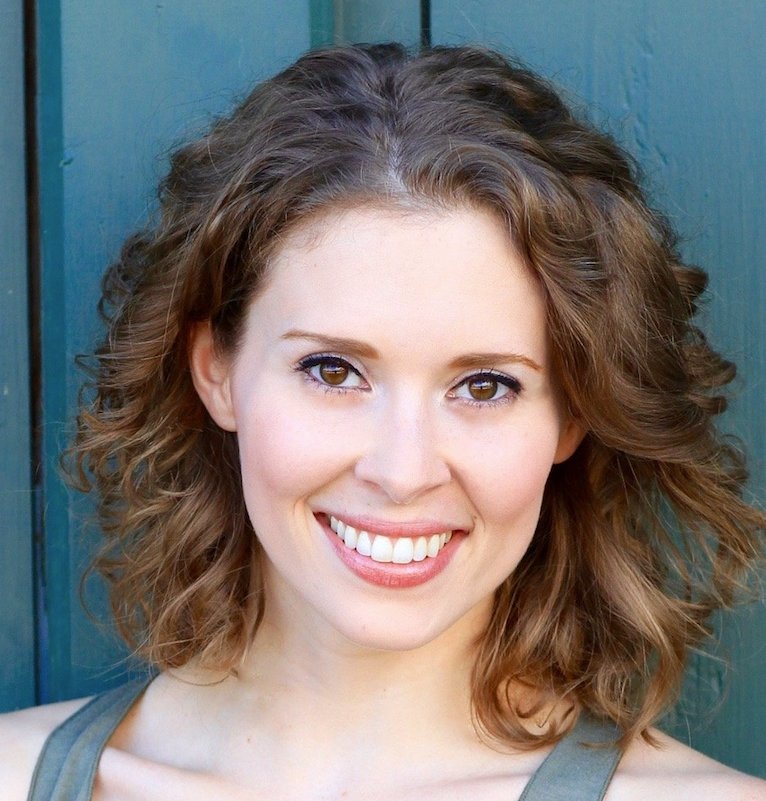 Anna Kimmell, director of education at the Arkansas Repertory Theatre, chose a cast of 39, age 10-17, out of 150 children who auditioned for "Willy Wonka Jr." (Anna Kimmell)

The show will be recognizable if you've seen the 1971 film, Kimmell says, but the Rep production will also feature a lot of uniquely theatrical effects.

"The focus is learning all of the elements involved in putting together a professional show," she explains, including all the technical aspects — sets, props, costumes, lighting, etc. "There are a lot of fantastic elements that have involved a lot of problem-solving by our technical designers."

Among them: Violet Beauregard's "blow-up" suit. (Spoiler alert: Violet, a champion gum-chewer, clomps her jaws onto a still-in-development Wonka product that transforms her into a giant blueberry.)

"My blow-up suit is amazing," says Isabella Nguyen, who was looking forward to starting to work with it in rehearsals the week following the interview.

Unlike the book and the movie, Bricusse's stage adaptation does not focus on a particular time or place. It revolves around Wonka, who is not only the narrator but who "drives the show," Kimmell says, including, "in our production, infiltrating the real world" outside the factory and orchestrating the ultimate outcome of the golden ticket distribution.

Charlie remains the protagonist, however.

"Charlie is every kid, the ultimate kid," Kimmell says. "Charlie is still our hero. If Wonka has a soft spot, it's for how sweet [Charlie] is, how considerate. "

Porter, who played heroic union organizer Jack Kelly in the musical Newsies at the Argenta Community Theater earlier this year, finds his latest lead role to be a lot more complex. Jack is strong and direct; Wonka, on the other hand, he says, has at least "two different faces, and so many aspects," including "creepiness and childishness."

Kimmell says much of the fun of putting together this production has been investigating elements outside the script. For example, each of the greedy and obnoxious "brats" represents a societal problem "bigger than life." She says all of the principal characters except Charlie are "extreme — Wonka included." 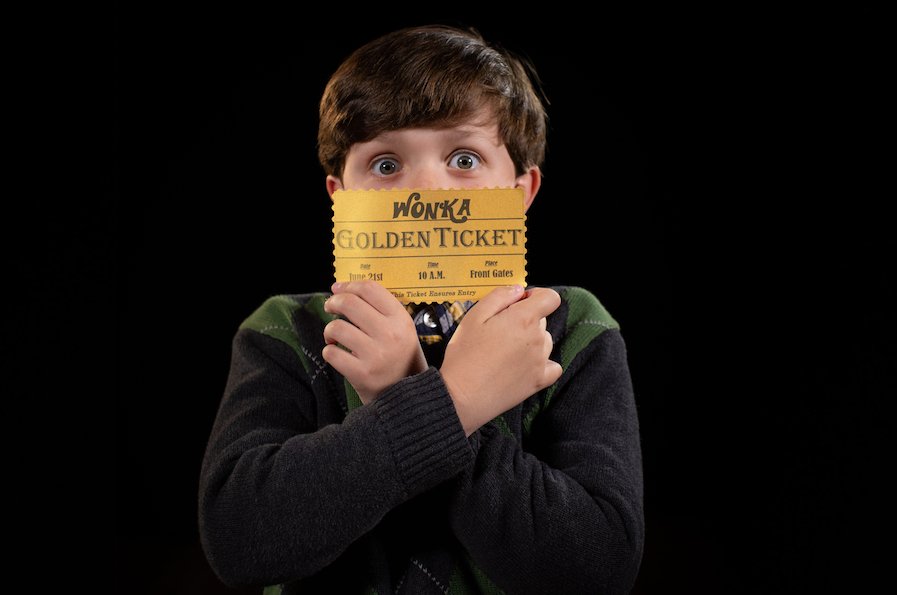 Augustus is a glutton; Veruca the spoiled scion of wealth; Violet has more ambition than sense; Mike is obsessed with modern screen technology. (In the original movie, he was glued to the television; today, he's totally into video games on phone screens.)

Moreover, in this production, each room in Wonka's factory presents a kind of temptation to which each child will succumb. That even includes Charlie, who yields to his mischievous and curious side by sneaking a sip of an experimental fizzy, lifting drink, but who redeems himself by finding a solution to his gaseous travail and later honestly admits his error.

"He tells the truth — that's the last test," says Collin Carlton, who has begun to see similarities between Charlie and Wonka, not the least their common passion for candy.

Speaking of candy, though Violet does chew gum, the cast, perhaps disappointingly, doesn't get to actually eat much candy on stage — most of the Wonka bars, created by properties designer Lynda J. Kwallek, are actually made from wood, for example, with trick ways of "breaking off" a piece within the view of the audience. 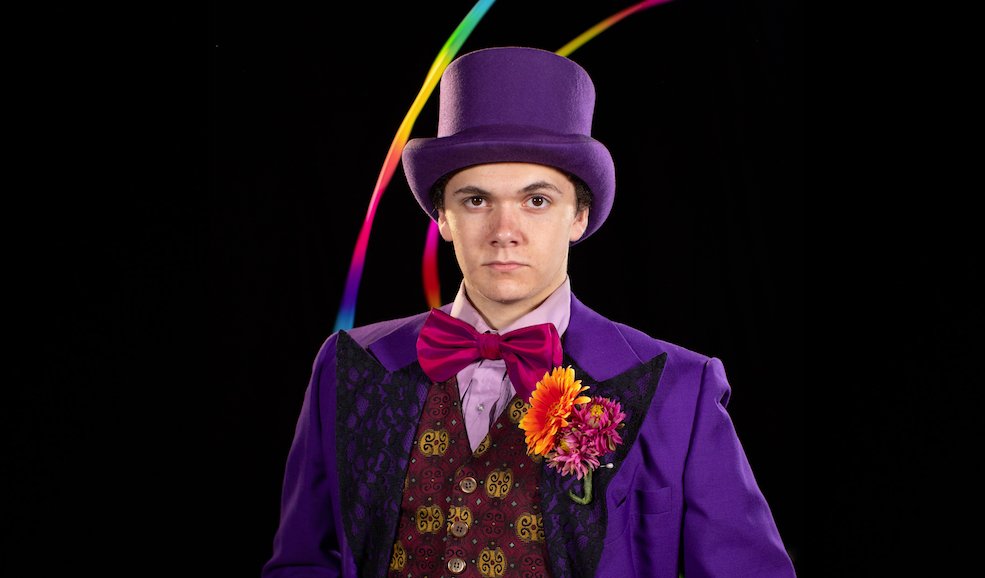 Kimmell says the brightness of Kwallek's props and Holly Payne's costumes "really pops" in contrast with the sedate, industrial blues and grays and quasi-Steampunk aspects of Mike Nichols' sets, which focus on factory settings. (Mr. Bucket, as fans of the book will remember, also works in a factory, one that makes toothpaste — a neat contrast with the chocolate factory, which represents the potential to create, as one possible byproduct, cavities.)

Kimmell and musical director Mark Binns saw about 150 youngsters try out during "three very full days of auditions," she says.

"I could have cast this show two or three times. The pool of talent here is really remarkable."

The cast comes from all over central Arkansas. Many of them have been taking classes at the Rep; the education program kept going last summer even after the Rep announced in April 2018 that a financial collapse had forced it to suspend operations and cancel the remainder of its MainStage season.

In turn, the presence of more than three dozen young people infuses the building with a more-than-usual and almost palpable energy, Kimmell says. Even the "brats."

"They're all very nice kids, but you'll love to hate them," she says.

■ The Innovation Hub will offer STEM-related, hands-on activities for kids and families for Opening Night Fun in the Rep's lobby at 6 p.m. Friday.

■ Artwork by seventh- and eighth-grade grade students from eStem Downtown Junior High will be on display in the lobby throughout the run. Each piece, designed and drawn by the students, depicts a room in Willy Wonka's chocolate factory.

A pre-show choir composed of Education @ The Rep students will perform musical-theater repertoire in the lobby before the June 21, 23, 28 and 30 performances.