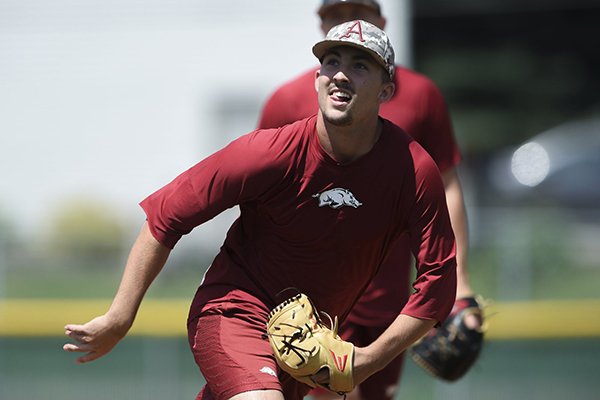 OMAHA, Neb. -- With the season on the line, University of Arkansas Coach Dave Van Horn is handing the baseball to freshman pitcher Connor Noland at the College World Series.

Noland, a right-hander from Greenwood, will start for the Razorbacks (46-19) in an elimination game against Texas Tech (44-19) at 1 p.m. today at TD Ameritrade Park.

"That gives me a lot of confidence to get out there and just do what I do," Noland said of Van Horn's decision. "I've dreamed about pitching in Omaha, and now I get to start."

"Phenomenal," Razorbacks sophomore catcher Casey Opitz said of Noland's season. "He didn't have all of his stuff early on and he's just kind of developed with all four of his pitches. It's been fun to work with him through that."

Van Horn said Noland's performance has been especially impressive because he played football last fall as a backup quarterback for the Razorbacks.

"I think he's had a good season," Van Horn said. "I mean, think about it. He didn't play fall ball with us. He didn't pitch last summer. The last time he picked up a baseball probably was the state championship game of his senior year."

Noland pitched Greenwood to a 4-0 victory over Benton in last year's Class 6A championship game.

"Then he went to football," Van Horn said. "I think he's done a great job."

Noland, who played in four football games and started the Razorbacks' 20-0 victory over Tulsa, said that experience should help him today.

"I don't really get nervous," Noland said. "I've been on a big stage, obviously, with football.

"I'll be anxious to get out there and throw the first pitch, but once I do that, I'll be good."

Razorbacks sophomore shortstop Casey Martin said Noland has been impressive working his way into the starting rotating with a heavy workload.

"Considering he's a freshman who played two sports, I think he's done a fantastic job coming into a tough position like this," Martin said. "It's not easy, so you've just got to tip your cap to him. He's kept a level head all year."

"Coming in as a freshman and watching him play, he looks like a sophomore or junior," Fletcher said. "He's pretty comfortable out there. He keeps his emotions under control and does a good job."

Noland is coming off a rough start in the super regional when Ole Miss beat Arkansas 13-5. He went 1 inning and allowed 4 earned runs and 3 hits -- including 2 home runs -- along with hitting a batter.

It was the second-shortest outing for Noland. He didn't get an out while facing five batters in a 12-2 loss at Vanderbilt, then the next week threw 72/3 shutout innings against Mississippi State when he didn't walk a batter and had five strikeouts.

Noland said he got good advice from Arkansas junior ace Isaiah Campbell, who last season was pulled by Van Horn without getting an out in a regional game against Dallas Baptist, then came back to hold South Carolina to 2 runs and 4 hits in 4 innings when the Razorbacks beat the Gamecocks 14-4 to win a super regional.

"He just told me to not worry about that one and move on to the next one," Noland said. "He told me I have another opportunity in Omaha, and here we are."

Fletcher said he expects Noland to pitch well today because of his makeup.

"He's a competitor," Fletcher said. "People have tough days and if you're a competitor, you'll bounce back and have a good one the next day."

Noland said he learned from his struggles in the super regional against the Rebels.

"I need to go out there and fix that and throw pitches with great intent and try to make every pitch count."

Campbell pitched seven scoreless innings in Florida State's 1-0 victory over Arkansas on Saturday night to lower his ERA to 2.13 in 1181/3 innings this season.

"That's the way it should be every time," Noland said. "So I'm just going to try to be like him."

Noland doesn't need to be Campbell.

"We've got everybody available," Van Horn said of the pitching staff. "If [Noland] goes out and gets a few innings, that's all we're looking for.

Noland has given the Razorbacks at least five innings in five of his previous eight starts. Excluding the super regional, he had a 1.66 ERA over a seven-game span.

"Connor's pitched well all year," Fletcher said. "He's a guy that's going to throw strikes, pound the zone, keep the ball down and make them put it in play.

"In [TD Ameritrade Park] it's not easy to drive the ball over the fence."

When Noland is at his best, Van Horn said, he's locating his fastball with some sink to it.

"He'll have some quick innings, because they swing at it and they hit it and we field it," Van Horn said. "He's also got a good changeup and a slider, and he's got a curveball with a little more downward action. He can use all of them.

"When he gets it rolling, he can get into a little bit of a groove."