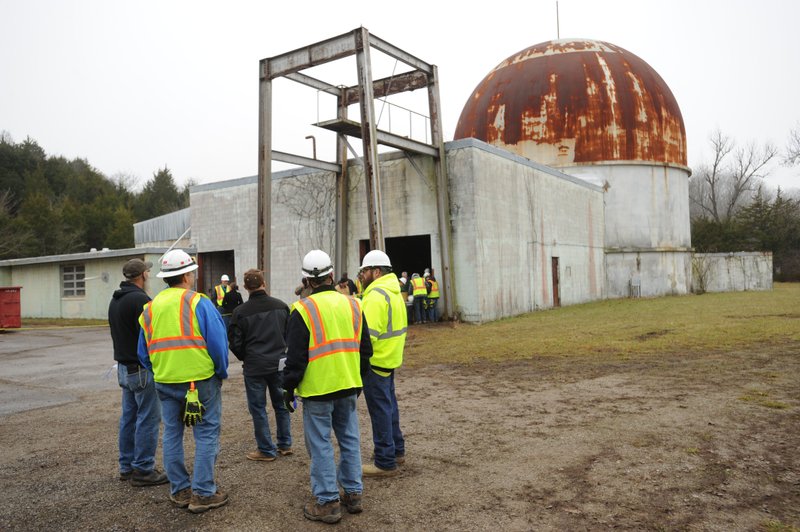 NWA Democrat-Gazette/ANDY SHUPE A group of visitors and officials from the University of Arkansas and Energy Solutions speak Thursday, Jan. 19, 2017, during a tour of the shuttered SEFOR nuclear facility near Strickler in southern Washington County. Visit nwadg.com/photos to see more photographs from the tour.

FAYETTEVILLE -- The underground portion of a half-inch-thick steel containment structure remains in place after the decommissioning of a nuclear reactor site in Washington County.

This month, a final status report on the site cleanup received approval from the state's radioactive materials licensing authority.

A letter dated June 3 from the state Department of Health to property owner the University of Arkansas, Fayetteville states the site meets requirements for unrestricted release. The rural site is located about 20 miles southwest of Fayetteville.

Last month, a deed notice signed by University of Arkansas board of trustees Chairman John Goodson describes materials remaining underground after the cleanup. The deed notice states "there are no environmental concerns with the steel containment structure remaining."

The project manager on the cleanup, Dean Wheeler, said in an email that below-grade structures "were surveyed and verified to be radiologically clean" as part of a decommissioning plan that allows them to remain.

"This is standard decommissioning practice throughout the US," Wheeler said.

The carbon steel structure is described in the deed notice as the bottom portion of the containment building liner, cylindrical and 50 feet in diameter, and with a top edge 3 feet below ground. It extends approximately 50 feet deep, according to the notice filed May 30 with the county clerk.

The cleanup finished earlier this year, ending a project funded with approximately $24 million in U.S. Department of Energy grants, according to UA. The university partnered with Utah-based EnergySolutions on the project, which involved tearing down buildings at the former SEFOR test reactor site -- including the containment dome once visible from Arkansas 265 -- and trucking away radiological waste to specialized disposal facilities.

Wheeler, with EnergySolutions, said the standard with decommissioning projects is to remove structures down to 3 feet below grade.

"It probably boils down to cost," Wheeler said in a phone interview, as removing material deeper underground "would be a huge cost because you've got to excavate a very large hole" and pump away any groundwater.

Containment shielding around the reactor extended so far below ground in part to deal with concerns about a potential explosion, Wheeler said.

But "there's no real need to pull it out," Wheeler said. "It's not doing any damage."

The deed notice refers to the state Department of Environmental Quality as having "approved" a closure report with no further action needed, but Nate Olson, a spokesman for the state agency, said Friday the SEFOR site continues to be reviewed.

The 20-megawatt, sodium-cooled reactor operated from 1969-72. It never produced electricity. Nuclear fuel and coolant were removed from the site after it ceased operations. UA took over ownership in 1975 but it sat unused since the early 1980s. Cleanup work began after a September 2016 grant award.

The state Department of Health has a radiation control division. Officials reviewed a report dated May 1 about the cleanup and also had staff members survey the site, according to the June 3 letter releasing the site for unrestricted use.

"Soil samples were received and submitted to an independent laboratory for residual radioactive contamination analysis," the letter states. The analysis showed "residual radioactivity that is distinguishable from background radiation results in a Total Effective Dose Equivalent that does not exceed 25 mrem per year," according to the letter, meaning it "does not have residual radioactive material in excess of ADH's unrestricted release guidelines."

The notice deed refers to the entire 620-acre property but states that the SEFOR reactor and support buildings were contained to a 3-acre portion of the site.

Meg Mirivel, public information director for the state Department of Health, said the state agency cleared the 3-acre section for unrestricted use.

"The remainder of the land was not under our purview," Mirivel said in an email.

The notice deed states that it was filed at the request of the state Department of Environmental Quality "to ensure that future prospective buyers are aware of this structure beneath the surface."

Larry Ropp said he lives about 3 miles from the SEFOR site.

"I wouldn't have any problem with what they've left buried," Ropp said in a phone interview when told about the remaining structures. He said he and his wife, Terry, attended several meetings hosted by UA and EnergySolutions providing updates on the cleanup project.

About the site, Ropp predicted, "the university is going to own it forever."