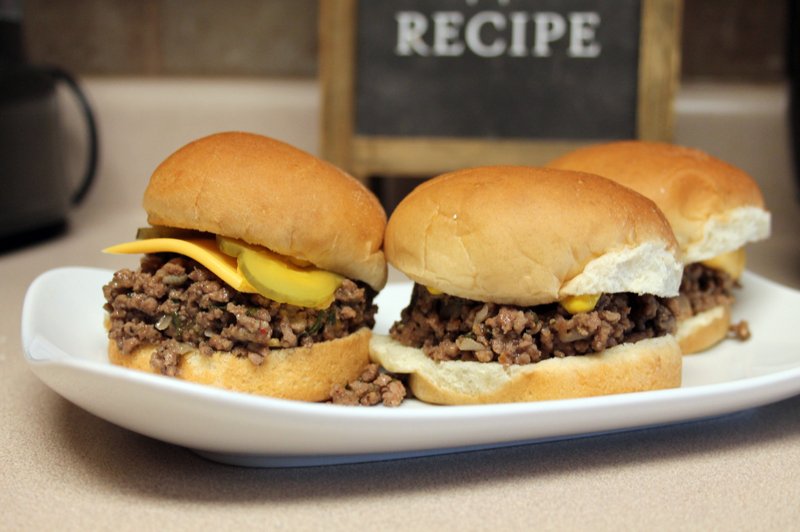 Sloppy Marvins are a spicy take on Sloppy Joes. Photo by Sean Clancy

I'm eating a Sloppy Marvin's Slider as its namesake and creator laughs.

"You're continuing to eat, so I guess that's good," says Marvin Williams in the kitchen of his Conway home as I finish my second small sandwich.

"Oh, it is good," I say, relishing this version of a Sloppy Joe that is more Midwest loose meat sandwich than the sugary, tomatoey version I've always known. Made with ground beef and onions and seasoned with Marvin's Dry Rub — Williams' own concoction of packaged seasonings, parsley, cracked pepper and red pepper flakes — the filling of the slider is a juicy, flavor-packed revelation with just enough kick to make it interesting. 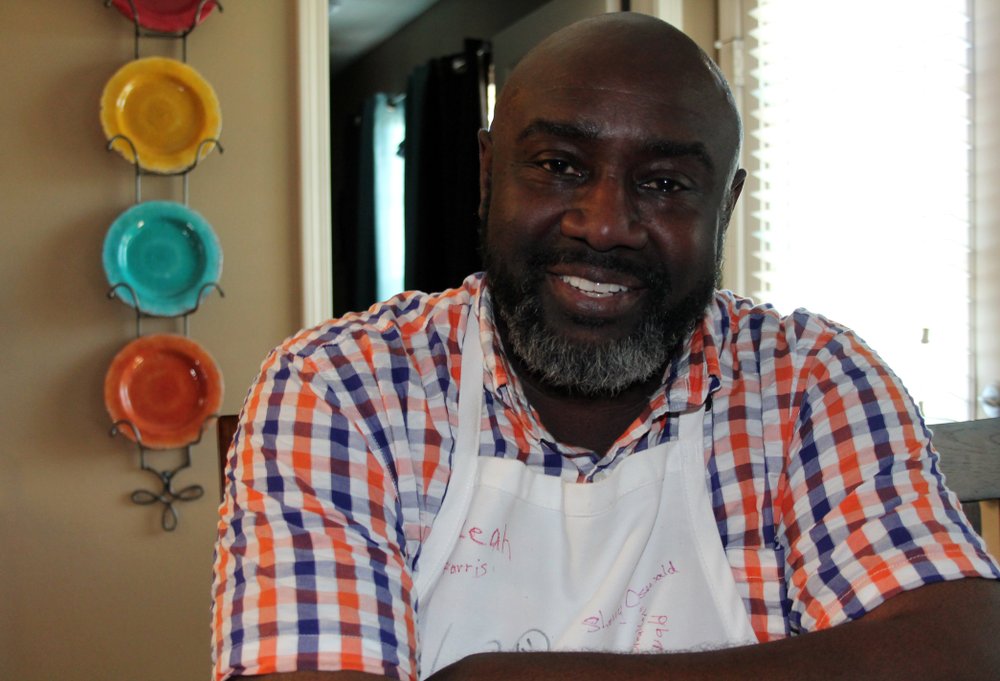 Marvin Williams, an academic adviser at the University of Central Arkansas in Conway, learned how to cook from his mom, grandmother and great-grandmother in Osceola. Photo by Sean Clancy

I have come to the neat, cozy home Williams shares with his wife, Pearlie, on a warm day in March bearing groceries I'd picked up from a list he sent me — 2-3 pounds of ground beef, one can of jumbo biscuits, a package of slider buns, a can of beef consomme or broth, a bag of shredded lettuce, a tomato, two pouches of Uncle Ben's Wild Rice, a small bag of real bacon pieces (not bits) and a bag of shredded cheddar cheese.

The idea was to hang out with Williams as he cooked something from Marvin Williams' Cooking Adventures ($25, Morris Press Cookbooks), his wonderfully accessible and practical book that was inspired by a random Facebook post and that is now in its third printing. We also laughed, a lot, which is hard not to do in the company of the gregarious 47-year-old, who is an academic adviser at his alma mater, the University of Central Arkansas in Conway.

Williams grew up in Osceola, the oldest of three children, in a house with his mother, grandmother and great-grandmother, whom he affectionately called Bigmama.

"Osceola was a lot of fun," he says. "It was just a blessing to be able to have that many generations in one house and to grow up knowing your great-grandmother."

His first love was music, and a piano sits just off the kitchen at his house.

"I started singing as a little boy. I was always drawn to whoever was playing the piano at church. My pastor allowed me to play for the children's choir. I would bang out my three chords every Sunday to whatever song we were singing. Then I developed a bit more and started playing for the church and churches in the surrounding area."

He has recorded an album of Christmas songs — 2016's Marvin Williams Celebrates the Prince of Peace, and a DVD of a performance of gospel songs called Gospel Sing Night with Marvin Williams.

By the time he was in his early teens, he was cooking, though more from practicality than with any grand ideas in mind.

"I used to always be in the kitchen with my great-grandmother and grandmother. When my mom became disabled, I took on more of a role of trying to help out around the house. I was just doing it to survive, and to do what I needed to do. It wasn't like I had this dream of becoming a chef."

He is not a chef, by the way, and often refers to his recipes as "guides," reminding his readers that: "My recipes are a guide. Be creative, make it your own."

The genesis of Marvin Williams' Cooking Adventures can be traced to a 2013 Facebook post about the baked chicken he'd just made for Sunday dinner.

"It went viral," he says, still incredulous, "and I started getting inundated with friend requests. I thought I'd been hacked."

It wasn't hackers, just people who wanted to know how to make the Best Baked Chicken (the recipe is now on Page 50 of his book and will "make your tongue slap your jaw").

The response inspired the Marvin Williams Cooking Adventures Facebook page, which has more than 45,000 followers. The book followed in 2017.

"My followers started telling me, 'I print your recipes from Facebook, you ought to do a cookbook.' That is literally how this happened."

He has sold copies of his book in almost all 50 states as well as in Canada, Mexico, Thailand, Japan and other countries, he says. It can be bought from the Marvin Williams' Cooking Adventures Facebook page or at the Mosaic Templars Cultural Center Museum Store in Little Rock.

It is not a typical cooking tome. Recipes are given in narrative form, like Church Bus Pound Cake, in which Williams recounts the decadent dessert served on church trips he took as a youngster. They also usually eschew specific measurements, in the tradition of the women who taught him.

"My great-grandmother was what you would call a dump cook, and that's what I consider myself — no measurements, you just kinda taste and feel as you go." 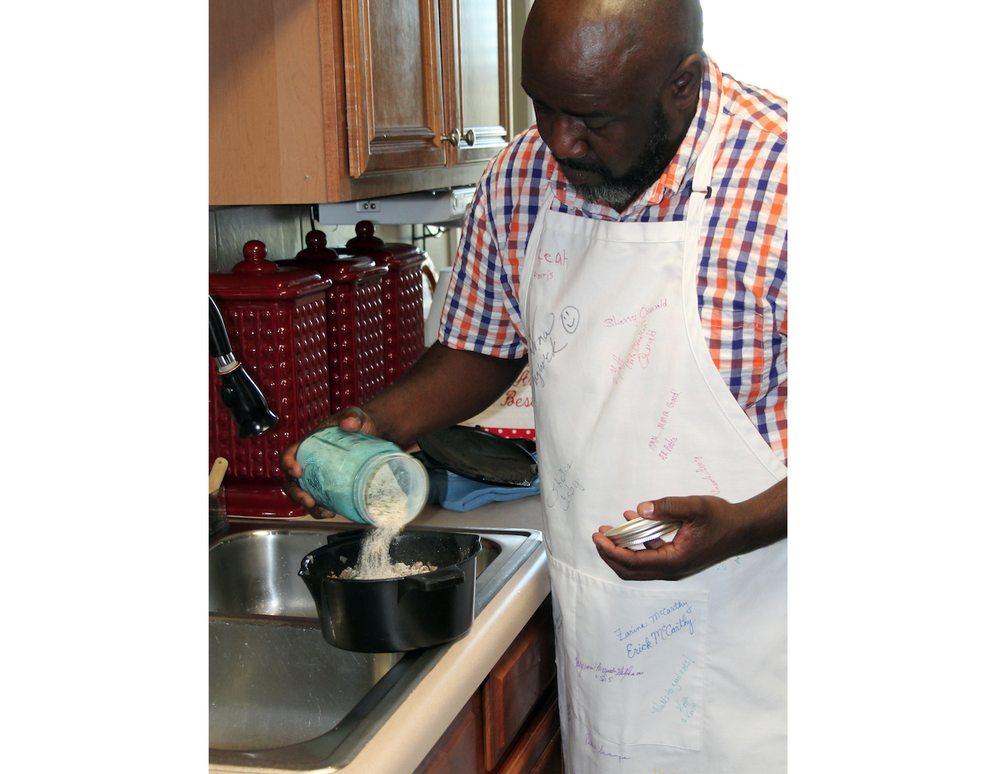 Marvin Williams calls himself a "dump cook," preferring to season dishes by sight and taste rather than specific measurements. Photo by Sean Clancy

Wearing a white apron signed by students he taught in a UCA Downtown cooking class, Williams takes an eyeball-it approach to seasoning the beef for his Sloppy Marvin's Sliders. After browning the meat with onions in a microwavable micro cooker, he sprinkles Marvin's Dry Rub on until it looks right, with nary a measuring spoon or cup in sight.

The leftover filler from the sliders will be repurposed for Beefy Brown Rice and then used in Bacon Cheeseburger Cups.

This approach is in keeping with how Williams cooks for himself and Pearlie. He does most of the week's cooking on Sunday, making several dishes that they will revisit for lunch and supper during the work week.

And he is not afraid to use shortcuts like bagged chopped onions and peppers from the grocery freezer, or picking up a rotisserie chicken for chicken and dumplings when he doesn't have time to boil a fryer.

"Thank you, Kroger, for chopping the onions for me," he says with a laugh. "Thank you, Pillsbury, for making those biscuits. I know how to make biscuits, but we're working people. We both work full time."

The Beefy Brown Rice uses the beef in what turns out to be a peppery take on dirty rice with chopped bell peppers (from a bag, of course) and Uncle Ben's rice to make a hearty, easy dish.

The Bacon Cheeseburger Cups are rolled out canned biscuits that are lined in a muffin tin, filled with the beef and browned according to the package instructions. Topped with diced tomato, shredded lettuce, mustard, pickles, bacon bits and cheese, they would make a clever appetizer or main course. 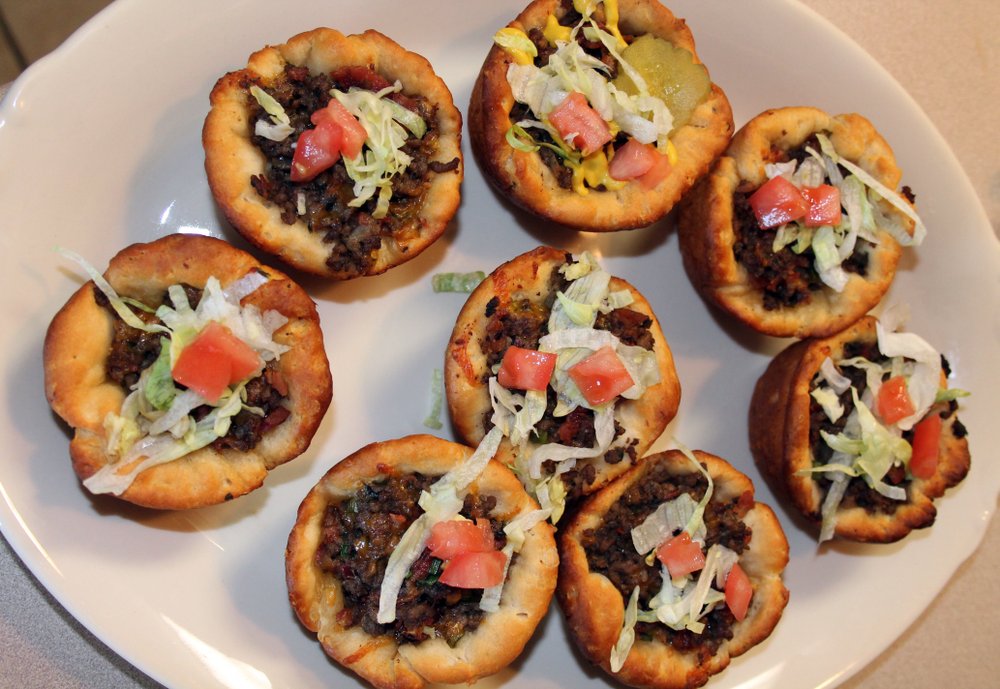 All of this, along with homemade funnel cakes for dessert, is prepared in a little over a half hour and Williams has somehow managed to keep his kitchen as spotless as it was before he started. After getting the last dish put away, he gathers some leftovers and takes them to a neighbor.

Sharing his food is something he does for friends who can't cook for themselves.

Nancy Stanton's mother, Janelle Stanton, attended Fellowship Bible Church in Conway with Williams. When Janelle became ill with pancreatic cancer, Williams cooked for her and that is how Nancy got to know him and his food.

"He's an excellent cook," Nancy says. "He brought soups that were just delicious, and cookies. We always looked forward to him coming."

He even recorded himself singing a song that was played at Janelle's funeral at her request.

"He is just such a giving and caring man," Nancy says.

He's doing what he saw his elders do when he was young.

"Nothing makes me happier than getting somebody's belly full of something I've made," Williams says. "It's the way I show love. It's like my grandmothers used to do. They always had some vegetables to make soup for the elderly and shut-ins." 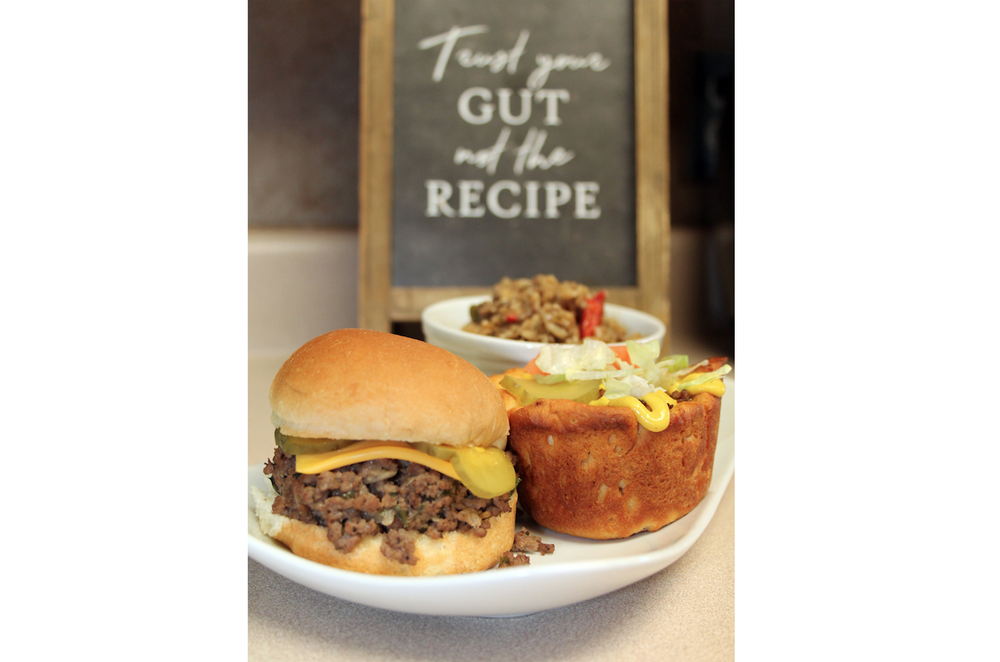 The recipes, or guides, from Marvin Williams' Cooking Adventures don't exactly fit the Democrat-Gazette's house style for recipes. No matter, though, as we are sharing these as they appear in the book, with minor edits for length. And the reader is encouraged to remember Williams' exhortation to "be creative and make it your own."

"My rub consists of 1 package of dry ranch mix, 1 package of dry Italian salad dressing (zesty or regular), 1 package of dry brown gravy mix, coarse black pepper, dried parsley and red pepper flakes! Equal parts of the first three ingredients and the remaining to taste. I have a large batch already made in a jar that I keep on hand. I have learned how much to use by trial and error."

"I brown ground beef or turkey with onions, drain the excess oil, add a little water, and I season the meat with my dry rub. I like mine on a hamburger bun with cheese, pickles and mayo."

"I had about 2 cups of leftover Sloppy Marvin and made another whole meal! I sauteed a bag of frozen chopped bell peppers and onions in olive oil, added the leftover meat, a 10-oz. can of beef consomme, 3 (8.5-oz) bags of 90-second microwave brown and wild rice. I seasoned everything with some kosher salt, coarse black pepper, and red pepper flakes. I simmered it a few minutes and dinner was served!"

"This is the single recipe that went viral, and that is responsible for my food following family and, ultimately, this cookbook. I put the chicken in my roasting pan, drizzle with a little olive oil, season liberally with my dry rub, and bake covered at 375 degrees about 1 ½ hours. I uncover the last minutes to brown. If I'm in a hurry, after an hour, I broil on low for about 15 minutes to brown." 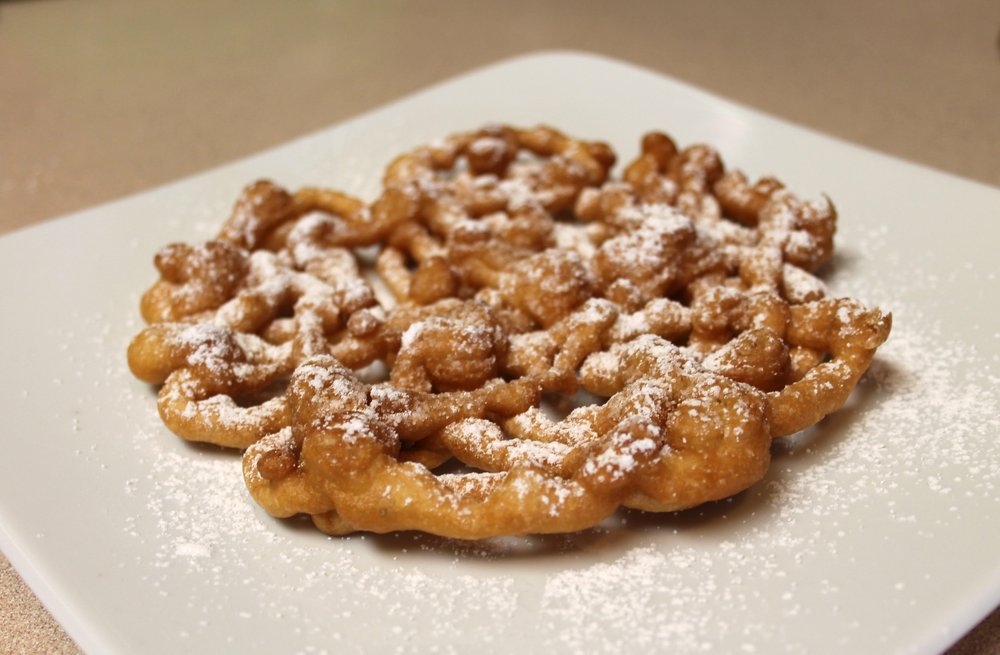 After having what he felt was an overpriced funnel cake at a festival, Marvin Williams started making his own. Photo by Sean Clancy

"I whisk together 1 ¼ cups all-purpose flour, 1 large egg, ⅔ cup of milk, 2 tablespoons of sugar, 1 teaspoon of baking powder, ¼ teaspoon of salt, and 1 teaspoon of vanilla flavoring. I add more milk if it's too thick. Instead of a funnel, I pour the batter into a plastic ketchup squeeze bottle! I heat a small amount of oil in my small cast-iron skillet, and squirt and swirl batter into the hot oil. I flip when it starts bubbling and turning brown. When I remove from the skillet, I sprinkle with powdered sugar and eat it while it's hot!"

CORRECTION: Marvin Williams’ Best Baked Chicken should be baked covered at 375 degrees about 1 1/2 hours. An earlier version of this story gave incorrect directions.