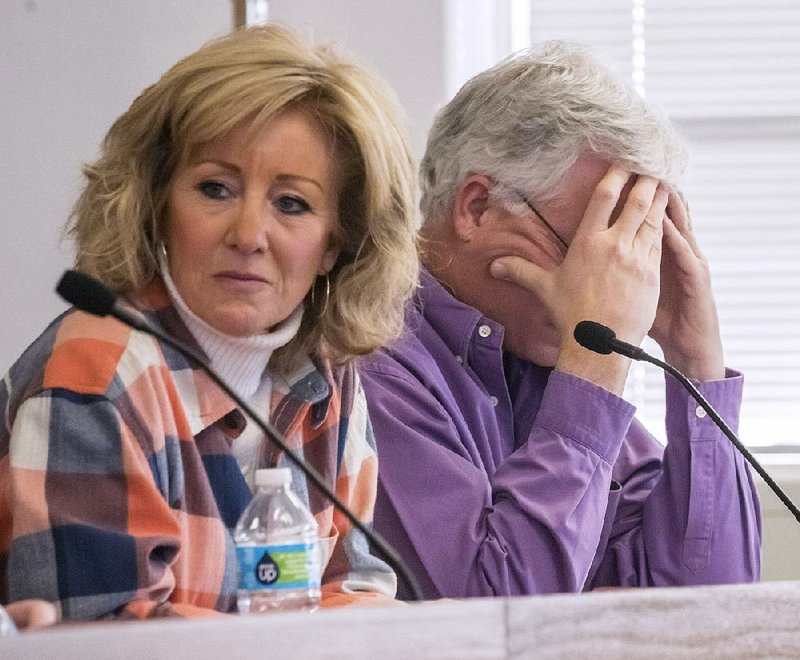 Arkansas State and Public School Life and Health Insurance Board member Renee Mallory is shown with Dr. Joe Thompson in this file photo.

Health insurance premiums for current and retired state employees will increase 5% next year under a plan approved Tuesday that involves reducing the amount of money set aside to pay unexpected large medical claims.

In the same unanimous vote, the State and Public School Life and Health Insurance Board also decided that the premiums for school employees will stay the same next year as they are this year.

Starting Jan. 1, state employees will pay $113.32 a month for individual coverage under the premium plan, the most popular option, up $5.40 from the $107.92 a month the employees now pay.

With an annual deductible of $500 for an individual or $1,000 for a family, the premium plan offers the richest benefits among the three plan options available to state employees. It covers about 22,000 of the 26,000 state employees covered under the plans.

The board's decision on the increase came after it learned during previous meetings that the state employees' plans faced a potential shortfall in the money that will be needed to pay claims next year, based on the plans' current rates and projected increases in medical and drug expenses.

If no other changes were made to the plans, the employees' rates would need to increase by 16.6%, John Colberg, an actuary with the consulting firm Cheiron of McLean, Va., told the board's benefits subcommittee last month.

To reduce the funding gap, the board decided Tuesday to use about $15 million of the $30.6 million it had set aside in a catastrophic reserve fund, which is meant to help pay for unexpected, large medical expenses.

That money, combined with the additional revenue generated by the rate increase, will most likely be enough to close the funding gap without dipping into money set aside to offset premiums in 2021, Colberg told the board Tuesday.

Even so, if medical expenses continue to increase at an annual rate of about 5.5 percent, the rates for state employees' plans will need to increase 29 percent in 2021 unless other changes are made, according to Cheiron's projections.

Chris Howlett, director of the Department of Finance and Administration's Employee Benefits Division, said he was confident that the reduced amount in the catastrophic reserve fund will still be enough to cover unexpected medical expenses.

Before he became director of the division in 2016, he said, the fund only held about $6.5 million. Reducing the amount in the fund will mean it will contain enough to pay an extra month of claims at their current level, instead of two month's worth, he said.

John Bridges, director of the Arkansas State Employees Association, said the group understood the need for the increase and considered it a much better alternative than another option discussed by the board: eliminating drug coverage for retirees who are on Medicare.

That idea, which would save money for the state employees' plans even after reducing retirees' health plan premiums, was unanimously opposed by about 100 retirees who attended a meeting at the association's headquarters last week, Bridges said.

"We think it's a shame that we have to increase our premiums, but reality is reality," Bridges said.

Unlike the state employees' plans, the plans for school employees have enough money in other reserves to hold rates steady next year without reducing the plans' catastrophic reserve fund.

But if medical and drug expenses continue increasing at the current rate, the plans will need to increase rates in 2021 by 17% unless other changes are made, Colberg said.

Among school employees, the most popular plan option is the classic plan. School employees will continue to pay up to $46.02 a month for individual coverage or $358.32 for family coverage under that plan, which has an annual deductible of $1,750 for an individual or $2,750 for a family.

Some school districts reduce the premiums paid by their employees by contributing more than the state-required minimum of about $159 a month per covered employee.

The classic plan covers about 25,000 of the 47,000 public school employees enrolled in a state plan.

The 17,000 school employees covered under the premium plan will continue to pay up to $183.46 a month for individual coverage or $833.44 a month for family coverage.

The school employees' version of the plan has an annual deductible of $750 for an individual or $1,500 for a family.

One group of state employees who won't face an increase next year are those enrolled in individual coverage under the basic plan, which covers a total of about 1,700 workers.

They will continue to pay no monthly premium for that plan, which has an annual deductible of $6,450 for an individual or $12,900 for a family.

For about 10,000 retired state employees who are on Medicare, the monthly premiums for individual coverage will increase by $8.34, from $166.82 to $175.16. That plan covers prescription drugs and fills in gaps, such as deductibles and copayments, in Medicare's medical coverage.

The 5 percent increase will also apply to about 200 state retirees who are not on Medicare. For individual coverage, those retirees now pay monthly premiums ranging from $158.48 under the basic plan to $266.40 under the premium plan.