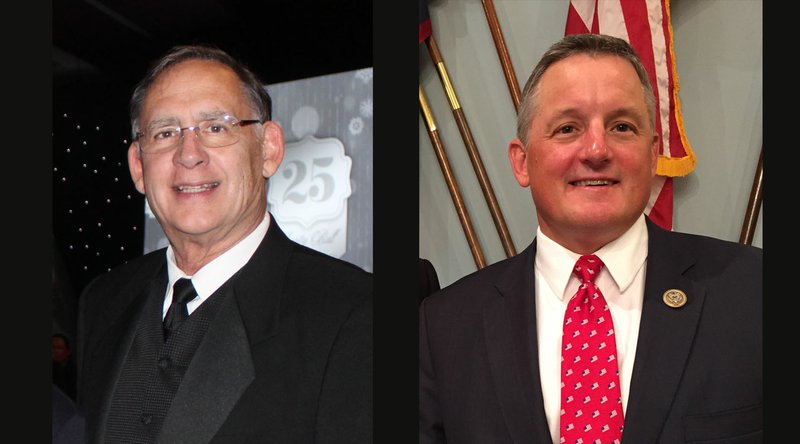 Under pressure from Congress, the U.S. departments of Labor and Agriculture announced the decision Wednesday evening, according to a joint news release from Boozman and Westerman.

"I think they were very, very surprised with the amount of blow-back they got from this," said Boozman. "These programs have touched a lot of people for decades."

On May 24, the Department of Agriculture announced the proposed closure of nine of the Forest Service's 25 Civilian Conservation Centers "without prior notice or consulting Congress," according to the release. The other 16 centers were to continue under a new contract operator or partnership overseen by the Department of Labor.

One of the centers slated for closure was the 55-year-old Cass Job Corps Civilian Conservation Center, located 17 miles north of Ozark. As of 2016, the Cass campus included 24 buildings on 38 acres.

"Job Corps is a no-cost education and career technical training program administered by the U.S. Department of Labor that helps young people ages 16 to 24 improve the quality of their lives through career technical and academic training," according to cass.jobcorps.gov.

"It means a lot to Franklin County and the area, but it also means a lot to the young people who qualify and go through that program," said Boozman. "This is all about giving young people opportunities they normally wouldn't have. That's really what it's all about. That's how you change a generation that's having problems."

Boozman and Westerman were two of the 51 U.S. senators and congressmen who signed a letter that was sent on June 5 to the secretaries of agriculture and labor urging them to "reverse their decision to shut down Civilian Conservation Centers and end the program in its current form."

"We should be looking for opportunities to expand workforce development programs in rural America as opposed to finding reasons to reduce them," Boozman said on June 5.

Boozman was the lead Republican cosponsor of the Job Corps Protection Act, which was introduced to block the Trump administration from using federal government funds in 2019 or 2020 to close any Civilian Conservation Center, according to the release.

Senate Bill 1736 would also prohibit the transfer of Civilian Conservation Centers to the Department of Labor and ensure that they remain "wholly operated solely by the Secretary of Agriculture."

The Job Corps Protection Act was sponsored by seven Democrats and two Republicans. It was read twice and referred to the Committee on Agriculture, Nutrition and Forestry.

Meanwhile, U.S. Rep. Peter DeFazio, D-Ore., introduced an amendment to H.R. 2740, a 2020 appropriations bill, in an effort to save the Civilian Conservation Corps program. It passed Jan. 12 in the House of Representatives by a vote of 313-109.

DeFazio's amendment would prevent funds from H.R. 2740 from being used to alter or terminate the agreement between the departments of Labor and Agriculture "governing the funding, establishment, and operation of Job Corps Civilian Conservation Centers"

U.S. Rep. Virginia Foxx, R-N.C., spoke against the amendment on the House floor on June 12, according to the Congressional Record.

"Job Corps is meant to be an outlet to help disadvantaged youth gain the skills necessary to achieve a good education and the skills needed for the workforce, but the failures of the program do a disservice to students, staff and the American taxpayers who pay for the programs," she said. "For years, this federally funded program has struggled to ensure the safety and security of students. There is ample documentation about the systemic deficiencies in Job Corps, and over 30 different government reports and audits have raised concerns over the safety and security of participants. The administration's proposed changes to Job Corps are an important first step in reforming the program so that it actually works for students and efficiently utilizes taxpayer funds."

Boozman said on Thursday that the Job Corps helps young people improve themselves and their communities.

"If a program is struggling, you don't just get rid of the program," he said. "You identify the cause and give them the resources to make them successful. This is a group of young people that desperately needs some help."

Boozman said the same bipartisan coalition of 51 who signed the letter will work with U.S. Sen. Jon Tester, D-Mont., the lead Democratic sponsor, to see if the Civilian Conservation Center program needs to be modified and whether it has sufficient resources.

According to a joint statement from the departments of Labor and Agriculture, they made the decision to backtrack after "robust engagement with stakeholders and members of Congress."

"For the time being, USDA does not intend to transfer these centers to [the Department of Labor] to allow management to determine a pathway that will maximize opportunity and results for students, minimize disruption and improve overall performance and integrity," the statement read. The departments "will conduct a robust organizational review to determine the appropriate course of action keeping in mind the [Forest Service] mission, the students we serve, and the American taxpayers."

In the future, the Forest Service must focus on and prioritize "its core natural resource mission to improve the condition and resilience of our nation's forests." according to the statement.

According to a notice in the Federal Register, the Cass Civilian Conservation Center was to be deactivated along with similar facilities in Kentucky, Montana, North Carolina, Oregon, Washington, Wisconsin and Virginia.

The U.S. Department of Labor was accepting public comments until July 1 on the proposed closures, according to the notice at https://bit.ly/2N09sW4. Since the 30-day comment period began on May 30, a total of 525 comments had been filed online as of Thursday.

Twenty-five of the nation's 123 Job Corps centers have been operated as Civilian Conservation Centers by the U.S. Forest Service, which is a division of the U.S. Department of Agriculture.

According to a May 24 news release from the Department of Labor, the closures would have created "an opportunity to serve a greater number of students at higher-performing centers at a lower cost to taxpayers by modernizing and reforming part of the Job Corps program."

The Department of Labor reviewed the performance and costs of the centers "to determine the best path forward," according to the news release.