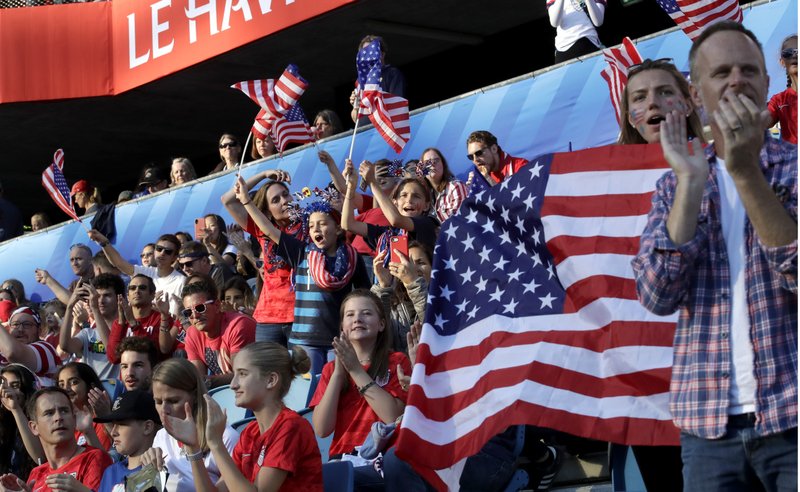 US fans wait for the start of the Women's World Cup Group F soccer match between Sweden and the United States at Stade Océane, in Le Havre, France, Thursday, June 20, 2019. (AP Photo/Alessandra Tarantino)

PARIS -- Where is that Women's World Cup buzz, FIFA?

On days the United States plays, thousands of fans clad in red, white and blue have filled the boulevards, bistros and brasseries of Reims, Paris and Le Havre. The stadiums also have been packed for Les Bleues, who hope to follow Les Bleus' triumph at last year's Men's World Cup by lifting their own coupe du monde.

But strolling down the Champs-Elysees or Rue du Faubourg-Saint-Honore, signage is scarce, that global gathering ambiance absent.

Back during the 1998 Men's World Cup in France, every patisserie, creperie and boulangerie zealously hyped the monthlong football festival. By the eve of the final between France and Brazil, streets were pretty much impassible as masses sang "La Marseillaise," the French national anthem. The City of Light could use some of that sparkle for the Women's World Cup

Instead of using Stade de France, the 80,000-capacity national stadium that hosted the 1998 World Cup final, Paris' site this year is 46,000-seat Parc des Princes, home of Paris Saint-Germain. While there were acres of merchandise stands and promotional booths outside Moscow's Luzhniki Stadium during last year's men's World Cup, commercial activity outside Parc des Princes is a restrained throwback. Secure zones around stadiums are smaller and searches upon entry less intense.

There even seems to be more signage for the Women's World Cup in the U.S. than in France. For a nation whose motto has been liberte, egalite, fraternite since the days of Robespierre, the equality appears to be missing for soccer's women.

"Sort of keeping power where it is," said U.S. star Megan Rapinoe, who has become a leader in the women's rights movement. "Equality for all requires people who have more of it right now to give up some, which I think obviously is a good thing for everyone. But some people don't want to give that up, so they're doing everything they can to keep all of it to themselves."

Contrast the streets here with the throngs on Rome's Via del Corso after Italy beat Ireland in the 1990 quarterfinals and the jammed fan zones across Germany in 2006 that caused FIFA to make large-screen viewing part of the World Cup experience. The blue blazer brigade in Zurich still doesn't get it.

Americans have powered the rise of women's soccer, not surprising given that the U.S. has won three of the seven World Cup titles. In its new deal with the U.S. Soccer Federation, Visa insisted that its money be split equally between the men's and women's team.

"There's a perception that is fueled by the data and statistics that the women's game itself is having a lot of upward trajectory," said Chris Curtin, Visa's chief brand and innovation marketing officer. "It has a lot more potential in growth than the men's game."

Fatma Samoura was appointed by Infantino as FIFA's first female secretary general. She was in the background for most of the men's World Cup last year and appears reticent to speak out on her own. Instead of responding to emails, she forwards them to FIFA's media department.

FIFA's prize money and investment make far bigger -- and timid -- statements than its words. It doubled prize money for the women to $30 million this year and the amount for the winning team to $4 million. For last year's tournament in Russia, France received $38 million from a $400 million pool, and FIFA has raised the men's total to $440 million for 2022.

U.S. women outrate the men on American television during the latter stages of the World Cup. Brazil's 1-0 win over Italy on Tuesday drew 22.4 million television viewers back in Brazil for a late-afternoon start in South American time.

An Atletico Madrid-Barcelona women's match drew 60,739 in March, and Manchester City's 3-0 win over West Ham in the FA Women's Cup final last month was watched by 43,264 at Wembley.

"Europe is doing a very good job in general -- a lot of leagues have established in the last couple of years. There is investment from the clubs, and sponsors are following the best," said Ricardo Fort, head of global sponsorships at The Coca-Cola Co. "But the other regions are following really closely."

Players note the slights and fault FIFA for not stepping up.

"I don't really understand why there's such a resistance against going all in on women," Rapinoe said. "I think it's pretty clear women in sport have not been treated with the same care and financing and all of that that men's sports has."