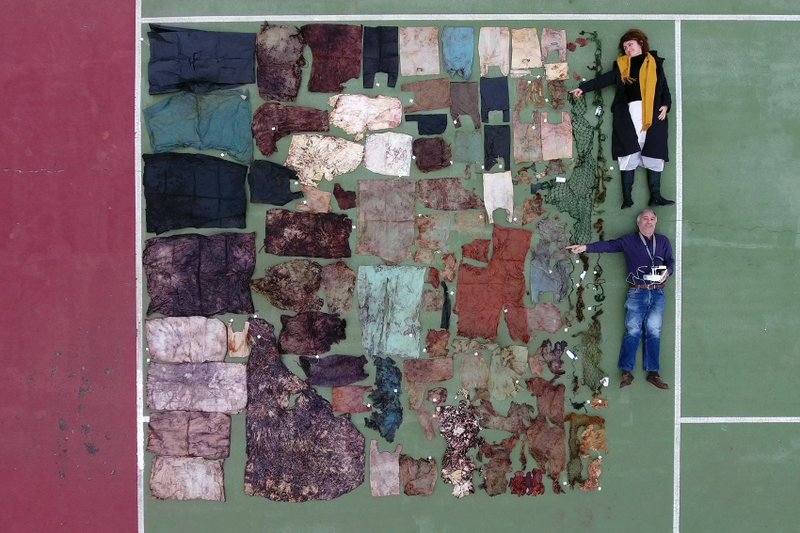 In this undated handout photo provided by the Pelagos Cetacean Research Institute on Friday, June 21, 2019, researchers Alexandros Frantzis and Voula Alexiadou lie on a tennis court next to the plastic that was in the stomach of a dead sperm whale found on the Aegean Sea island of Mykonos. The collection includes a Greek souvlaki restaurant bag, Turkish trash bags and biscuit packaging. A study of whales and dolphins that have washed up dead in Greece over a 20-year period has found alarmingly high levels of plastic trash - mostly bags - in the animals' stomachs, which can condemn them to a slow and painful death. (Pelagos Cetacean Research Institute via AP)

ATHENS, Greece -- A study of whales and dolphins that have washed up dead in Greece over a 20-year period has found high levels of plastic trash -- mostly bags -- in the animals' stomachs, which can condemn them to a slow and painful death.

In the worst case, a researcher said Friday, a 17-foot young sperm whale beached on the Aegean island of Mykonos had swallowed 135 plastic items weighing a total of 7 pounds. This blocked its stomach, grossly distending it, while the animal itself was emaciated and had starved to death.

Sperm whales are an endangered species already at high risk in the Mediterranean from collisions with ships, entanglement in drift fishing nets and noise pollution from oil and gas exploration.

The study published in the Marine Pollution Bulletin, which organizers say was the first on such a scale in the Mediterranean, found that sperm whales were also the species worst affected by plastic ingestion. Six out of 10 specimens were found to have consumed plastics, according to Alexandros Frantzis, scientific director of the Athens-based Pelagos Cetacean Research Institute that conducted the research.

"The amount of [debris] we found is very high, and should set off an alarm," he said. "It is now something common. ... It's not just that some random animal swallowed plastic."

Frantzis is a prominent whale and dolphin expert known for first linking fatal whale beachings to the use of military sonar by warships.

In a separate incident outside the scope of the Greek study, a 26-foot pregnant sperm whale was found dead off Sardinia in March with 48.5 pounds of plastic in its stomach.

The study, which did not examine microplastics that are invisible to the naked eye, found that nine out of 34 whales, porpoises and dolphins washed up dead on Greek shores from 1993-2014 had swallowed plastic debris of considerable size. Three died from it.

Frantzis said bags pose a huge problem because they are so widely used.

"None of us is innocent," he said. "Without our knowledge or intent, some of [the plastic that is swallowed by whales or dolphins] may have passed through our hands. We may even have disposed of it in the trash, and it may have been blown away from an open landfill. These things travel, they have no borders."

The Mediterranean is one of the most polluted seas in the world in terms of both floating and seabed debris, with plastic the main problem -- found even in abyssal depths.