Religions consider how much faith to put in pot 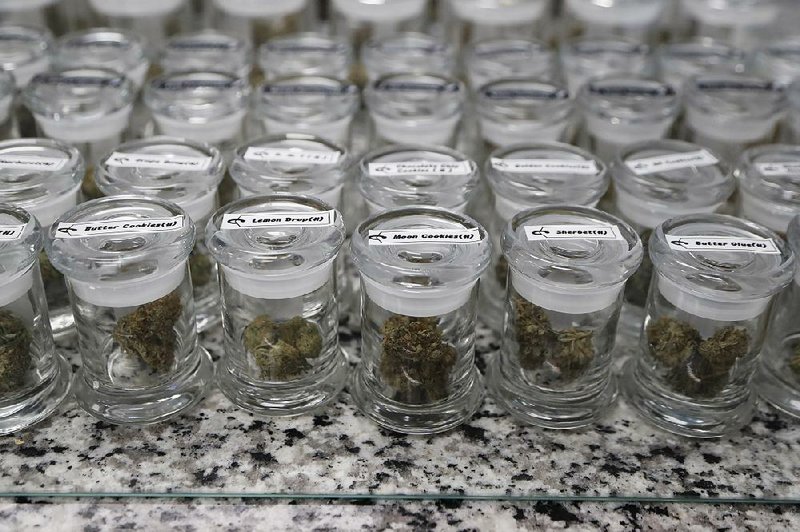 Medical marijuana is on display at the Far West Holistic Center dispensary in Detroit. More users believe that faith communities should weigh in on the debate to legalize the drug.

PHILADELPHIA -- On June 2, at a Philadelphia synagogue, Karen Michaels attended a conference about cannabis and various religions' views on it. She knows she was there because she has the notes she wrote. But she can't recall a minute of it.

The former community health administrator of the Philadelphia suburb of Fairmount has no short-term memory. It was snatched away from her in a 1990 car wreck, which also left her in constant pain.

To reduce her dependence on opiates, Michaels last year tried medical marijuana. The resulting relief, she says, was akin to "a miracle" -- a blessing from a plant world whose creator "doesn't make junk."

Although Michaels, 57, said she can't say for certain whether God endorses medical marijuana, she is one of a growing number of users who believes that faith communities must lend their voices, however conflicting, to the debate over the legalization of cannabis. The concerns encompass sacred texts about pain and suffering, obedience to religious and governmental laws, and social justice questions about who must pay a criminal price and who may turn a profit.

Staying quiet, Michaels contends, isn't an option: "When we meet our maker, we are responsible not only for things we have done, but also the things we haven't done."

About 65% of Americans believe smoking marijuana is "morally acceptable," while 31% say it isn't, according to a 2018 Gallup survey. A 2016 study by the conservative Christian polling organization Barna Group found that among practicing Christians generally, 34% favored legalization; among evangelicals, the number dipped to 16%.

Marijuana use has been intrinsic to some faiths' practices for centuries, said Chris Bennett, author of Green Gold the Tree of Life: Marijuana in Magic and Religion. Taoist texts dating to the fourth century mention cannabis. Bhang, an edible preparation of the plant, is consumed during the Hindu festival of Holi. Rastafarians view its use as a sacrament bringing them closer to God.

Reaching back five millennia in the Jewish tradition, Rabbi Eli Freedman of Congregation Rodeph Shalom cited Genesis 1:29: "God said he created all seed-bearing plants and God said, 'It was good.'"

Mainstream denominations tend to take nuanced stances on pot. The Unitarian Universalist Association has backed full legalization since 2002, but most faith groups separate their positions on medical marijuana, currently legal in 33 states including Arkansas, Pennsylvania and New Jersey, from adult recreational use, permissible in 11 states.

For instance, the Presbyterian Church (USA), United Methodist Church, United Church of Christ, Episcopal Church, Union for Reform Judaism, and Progressive National Baptist Convention support the use of medical marijuana, but stop there. The Roman Catholic Church has declared drug use a "grave offense" except when used "on strictly therapeutic grounds."

Meanwhile, the Presbyterian Church (USA) and the National Council of Churches, USA, have called for the removal of criminal penalties for possession of modest amounts of marijuana for personal use.

Last year, the Church of Jesus Christ of Latter-day Saints backed the legalization of medical marijuana in Utah, even though it has banned cannabis use for Mormons since the early 1900s.

In Islam, scholars disagree. Drinking alcohol is prohibited. Marijuana use "is similar because it can change levels of consciousness," impairing the ability to make moral choices, said Katherine Klima of Cherry Hill, N.J., a medical ethicist and former director of nursing at the National Guard Hospital in Medina, Saudi Arabia.

"But treating illness is encouraged in Islam," she said. "Using morphine for pain management is permissible when the benefit is greater than the harm and there is no better alternative. I would think the ruling would be the same on marijuana."

Clergy have been more likely to support -- and often lobby for -- the legalization of medical marijuana because of its pain-relieving qualities. But the issue becomes complicated for religious leaders who have seen the devastation that drugs have wreaked on their communities, said the Rev. Al Sharp, executive director of Clergy for a New Drug Policy, which advocates for reform of drug laws.

Russell Moore, president of the Ethics and Religious Liberty Commission of the Southern Baptist Convention, just says no. He calls marijuana a mind-altering substance producing the same effect as drunkenness, which the Bible opposes. Focus on the Family, a conservative Christian group, questions marijuana's medical benefits and argues that it's harmful and addictive. But Christian broadcaster Pat Robertson, also a conservative, told The New York Times in 2012 that he supported legalization, with marijuana treated like an alcoholic beverage.

Earlier this month, Rodeph Shalom raised the concern during "Faith in Cannabis: Religion, Science and Justice in PA's Medical Marijuana Program," a forum at its Philadelphia synagogue, at which Michaels discussed her views in a breakout session on religious texts.

Organizer Laurel Freedman, a consultant in the cannabis industry, is a member of Rodeph Shalom, where her husband serves on the rabbinical staff. For the conference, a house of worship offered "a safe space" that could help "destigmatize a medicine that has been so beneficial to so many," she said.

In the 1970s, Rabbi Moshe Feinstein, a renowned scholar in Jewish law, wrote that marijuana use was prohibited because it is addictive, "destroys" the mind, and dishonors parents. But in 2013, Rabbi Efraim Zalmanovich, an expert in Jewish law from Israel, declared that medical cannabis was kosher, although recreational use "to escape this world in any excessive way" is not.

Despite the differences in religious perspectives, Sharp argues that clergy largely have been able to unite around what he describes as the failures of the War on Drugs, which have devastated mostly minority families.

It is a social justice problem that should concern everyone, said the Rev. Gregory Holston, senior pastor of Janes Memorial United Methodist Church and executive director of POWER, a Philadelphia civil rights group.

"People of faith have always been involved in any issue of social justice in America, from civil rights, through every rights movement," Holston said. "We need to correct the wrongs, give real restitution to the tens of thousands who have had their lives ruined ... before [cannabis] becomes a corporate business where millions and billions are made."

Print Headline: Religions consider how much faith to put in pot