GOP out to rein in ballot amendments; Arkansas one of 16 states in push 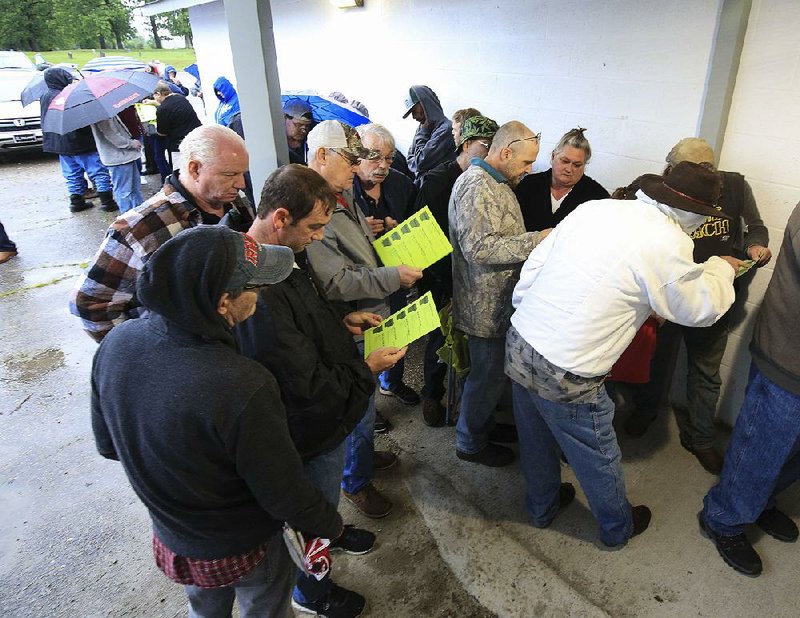 Customers look at the menu of products available outside Doctors Orders Rx medical marijuana dispensary in Hot Springs on May 11, the first day sales were legal in Arkansas. The legalization of medical marijuana in 2016 is one of 20 times the state constitution has been changed in the past seven elections. ( Arkansas Democrat-Gazette / Staton Breidenthal)

Arkansas' Republican-dominated Legislature has taken steps this year that will make it harder to put such proposals before voters, and they are not the only ones.

Florida, North Dakota, South Dakota and Utah also have enacted restrictions on the public's ability to place initiatives on the ballot. In Michigan, the state's top election official is being sued over Republican-enacted requirements that make it harder to qualify proposals for the ballot.

"This is a way to make sure that there is absolutely no way that anyone can do something that [Republican lawmakers] don't already approve," said Florida state Sen. Oscar Braynon, a Democrat who opposed state restrictions recently signed into law.

In Arkansas, the changes came after voters legalized medical marijuana in 2016 and last year approved raising the state's minimum wage to $12 an hour by 2021.

The state's governor signed into law legislation overhauling the way measures are approved for the ballot so that a proposed initiative and the signatures collected in favor of it are reviewed at the same time. The change, critics say, would mean groups could waste time and money circulating petitions only to find out afterward that there was a problem with the wording that would disqualify it from the ballot.

Arkansas lawmakers also placed on next year's ballot a measure that, if approved by voters, would impose additional restrictions. Those would include tripling the number of counties where initiative sponsors must collect a minimum number of signatures and eliminating a 30-day period groups have to gather additional signatures if they initially fall short. The lawmakers' ballot measure also would move up by several months the deadline for submitting petitions.

"Everything they have done has ... the ultimate goal to eliminate the petitioning process so that the people have no voice, and it is outrageous," said Melissa Fults, executive director of the Drug Policy Education Group, who plans to try and get a recreational marijuana proposal on next year's ballot.

The success of the medical marijuana initiative was celebrated by Arkansas residents such as Joanie Hopson, who was one of the first in line when retailers started selling marijuana last month. The 36-year-old said she suffers from a host of ailments, including muscle spasms, seizures and a connective tissue disorder, and cried when she was finally able to buy cannabis legally to ease her pain.

"We were really on the verge of moving out of the state because I need my medicine," said Hopson, who lives in the community of East End, a short drive south of Little Rock.

Lawmakers pushing the restrictions said they are trying to rein in an initiative process that has been an easy target for out-of-state groups. Previous initiatives included unsuccessful attempts by pro-casino groups to give certain companies a gambling monopoly in the state.

Republican state Sen. Mat Pitsch, who co-sponsored the changes in Arkansas, said the state's constitution has been changed 20 times over the past seven elections -- a number that also includes measures lawmakers themselves put before voters.

"When you change your constitution three times every other year, that's more like legislating than having a constitution," said Pitsch, who noted the proposal on next year's ballot also would raise the threshold for lawmakers to send measures to voters.

A similar argument was used in Florida when the governor this month signed wide-ranging legislation that erects a number of hurdles to those trying to get initiatives before votes.

The new Florida laws require paid petition gatherers to register with the secretary of state, prohibit payments based on the number of signatures collected and levy fines if petitions aren't turned in within 30 days. The petitions also must include the name and permanent address of the signature-gatherer.

Gov. Ron DeSantis defended the bill, saying it is aimed at protecting the Florida Constitution from outsiders. The governor said he wants to take more steps to revise the process of changing the constitution.

"This is not supposed to be driven by out-of-state special interests; it's supposed to be driven by Floridians, but that's really not what's happened," DeSantis said. "If people really feel the need to do it, then you band together, you do your organizations, you do it. Right now, you just have one guy write a check and you pay these people per signature. It creates a lot of bad incentives."

Florida voters have approved a number of petition-driven amendments that Republicans don't like, including limits on class sizes, preschool education for all, medical marijuana legalization and, last fall, restoring voting rights for felons who have completed their sentences. In the works are petition drives for 2020 seeking to ban assault rifles and raise the minimum wage.

In Utah, where voters last year approved medical marijuana, Medicaid expansion and redistricting proposals, the state's Republican governor signed legislation delaying the implementation of successful initiatives to give lawmakers a chance to change them.

Rep. Brad Daw, the bill's Republican sponsor, said the change allows lawmakers to keep state agencies running smoothly by revising portions of voter-approved laws that conflict with other rules before they go into effect.

"The fact is, the Legislature can make changes one way or another," he said.

But critics say they worry the changes will leave voters feeling powerless.

"When you pass a ballot measure, you want to see something change," said Yoram Bauman with Clean the Darn Air, which is pushing to get on the 2020 ballot with a proposed a carbon tax to curb pollution and greenhouse gas emissions. "If you have to wait an extra year to see something change, that's frustrating, especially when you feel like during that extra time the Legislature can come in and monkey with it."

Not all changes are winning favor in Republican states. Idaho Gov. Brad Little vetoed proposals that would have made it tougher to qualify a measure for the ballot, saying he didn't believe the restrictions would stand up in court. The legislation was seen primarily as a reaction by the Republican-dominated Legislature to last year's voter approval of Medicaid expansion.

"We argued that for a change to constitutional rights of this magnitude, the correct process is to take that to the voters as a constitutional amendment," said Rebecca Schroeder, executive director of Reclaim Idaho, the group behind the Medicaid expansion initiative.

In Arkansas, the fight over initiative restrictions may not be over, with groups opposing them preparing a lawsuit. David Couch, the attorney who sponsored the minimum wage and medical marijuana initiatives, also sees another path to fighting back -- placing an initiative on next year's ballot that competes with the one pushed by the Legislature.

Information for this article was contributed by Brendan Farrington, Keith Ridler and Lindsay Whitehurst of The Associated Press.

Print Headline: GOP out to rein in ballot amendments; Arkansas one of 16 states in push