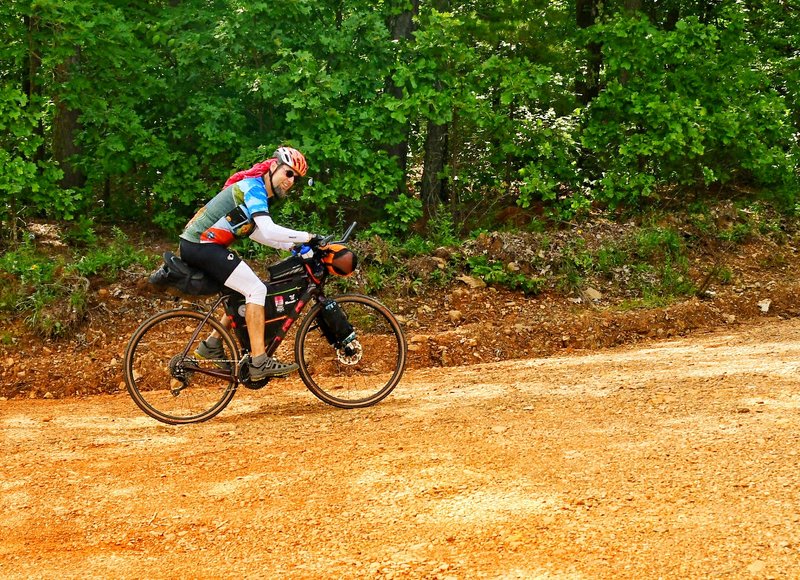 It's just after 4 p.m. June 14 and Mike Dicken is riding his bicycle toward the Clinton Presidential Center in downtown Little Rock. He is about to become the winner of the inaugural Arkansas High Country Race, a self-supported, 1,013-mile sufferfest that began six days earlier at this very spot for Dicken and 18 other competitors.

"I'm elated" the 34-year-old says, looking relieved and a little bewildered as he climbs off his bike in front of the Clinton Center. "I'm really excited, but I'm exhausted. I haven't had much sleep." 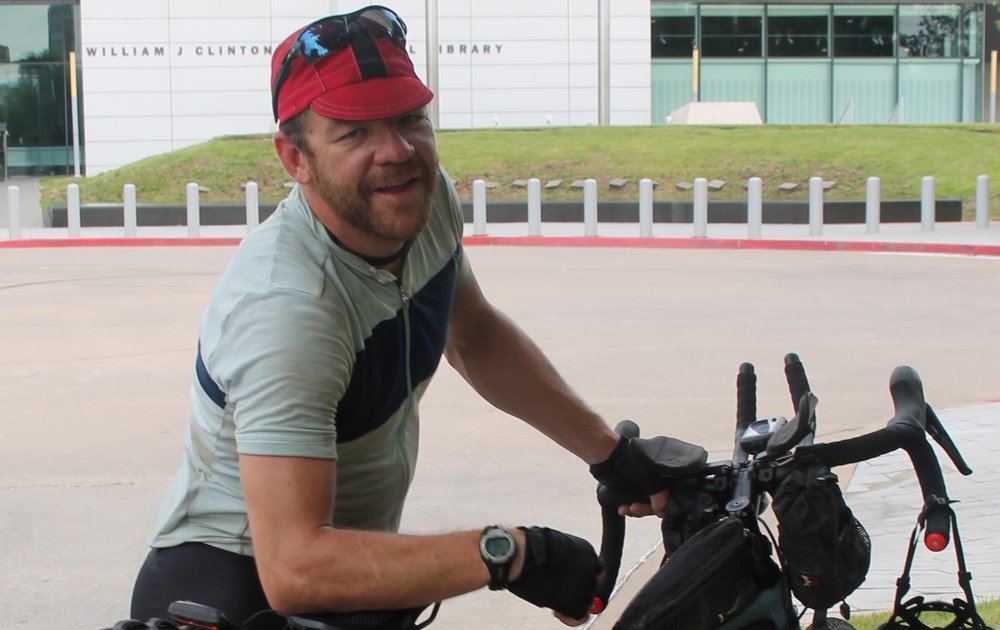 His jersey is coated in a layer of dirt as he lays his Specialized Diverge bicycle down near a curb before moving it into the grass. His mother, Amanda, hands him a cold bottle of Coke. He tells her he wants to get out of his shoes.

Dicken, who grew up in Russellville and works at a bike shop in Lander, Wyo., averaged 158 miles a day and finished the race in six days, 10 hours and five minutes. His closest rival, 35-year-old James Meredith of Bono, won't finish until 9:05 a.m. the next day.

The race covered most of the new Arkansas High Country Route, a nearly 1,200-mile loop of paved and gravel roads. It sends riders on an up-and-down, pedal-powered roller-coaster through not only the Ouachita Mountains but the Ozarks as well. Riders go through Little Rock, Hot Springs, Russellville, Fayetteville, Bentonville, Eureka Springs and over long stretches of roads in rugged isolation.

Chuck Campbell came up with the idea for this two-wheeled haul across some of Arkansas' most beautiful countryside while he was racing the 2015 Tour Divide from Banff, Alberta, Canada, to Antelope Wells, N.M.

"It came from an idea to showcase the cool stuff in Arkansas," the 57-year-old newly retired teacher says from his home in Russellville.

Campbell was riding the Tour Divide with Dicken, whom he taught in elementary school; he led Dicken's Boy Scout Troop.

The route they envisioned would encompass "all of these cool places, like Hot Springs and Queen Wilhelmina State Park, Albert Pike [Recreation Area] down on the Little Missouri River, Eureka Springs, and you've got to have the Buffalo [River] ... " Campbell says.

Back home in Russellville, he grabbed the Arkansas edition of the Delorme Gazetteer and a highlighter and then drove sections to see if they were navigable (some weren't).

He contacted the Adventure Cycling Association, the Missoula, Mont.-based nonprofit bicycle-travel outfit that curates one of the largest cycling route networks in the world with more than 48,600 miles of roads mapped.

Of all those miles, however, there was not a single one here, which Campbell noticed while buying Adventure Cycling maps for the Tour Divide.

"Arkansas was this big blank spot," he says. "After the Tour Divide I called them up and said, 'I'm from Arkansas, where's the love?'"

It was the beginning of a relationship that would find Campbell and the group piecing together a route that would eventually be split about equally between gravel and pavement and with about 80,000 feet of riding uphill, including an ascent of the state's highest peak, Mount Magazine.

"To have them show an interest in it was pretty thrilling," he says.

After an Adventure Cycling representative visited Campbell in Russellville, the group's blog post about prospects for the route "blew up" on social media, Campbell says.

Suzanne Grobmyer is the executive director of the parks foundation.

"Together with Adventure Cycling the foundation worked to connect the dots with the announcement and public relations of the route," Grobmyer says. "It was a team effort that produced a really great amenity for the state."

Some of that PR work included a cycling celebrity.

"It's the most hours I've ever spent on a bike, basically pedaling for 12 to 15 hours a day continuously," the 50-year-old Rusch told outsideonline.com. "I honestly didn't know how my body would react to that much time in the saddle ... I live in Idaho, so I'm no stranger to mountains, but the climbing in Arkansas was tough."

The route, which can be broken down into somewhat more manageable loops of 500 miles in the south section and 671 miles in the north, will be a draw for cyclists looking to satisfy wanderlust. It caters especially to riders on gravel and adventure bikes, which are made for riding on paved and dirt roads and represent a growing segment of the cycling market. 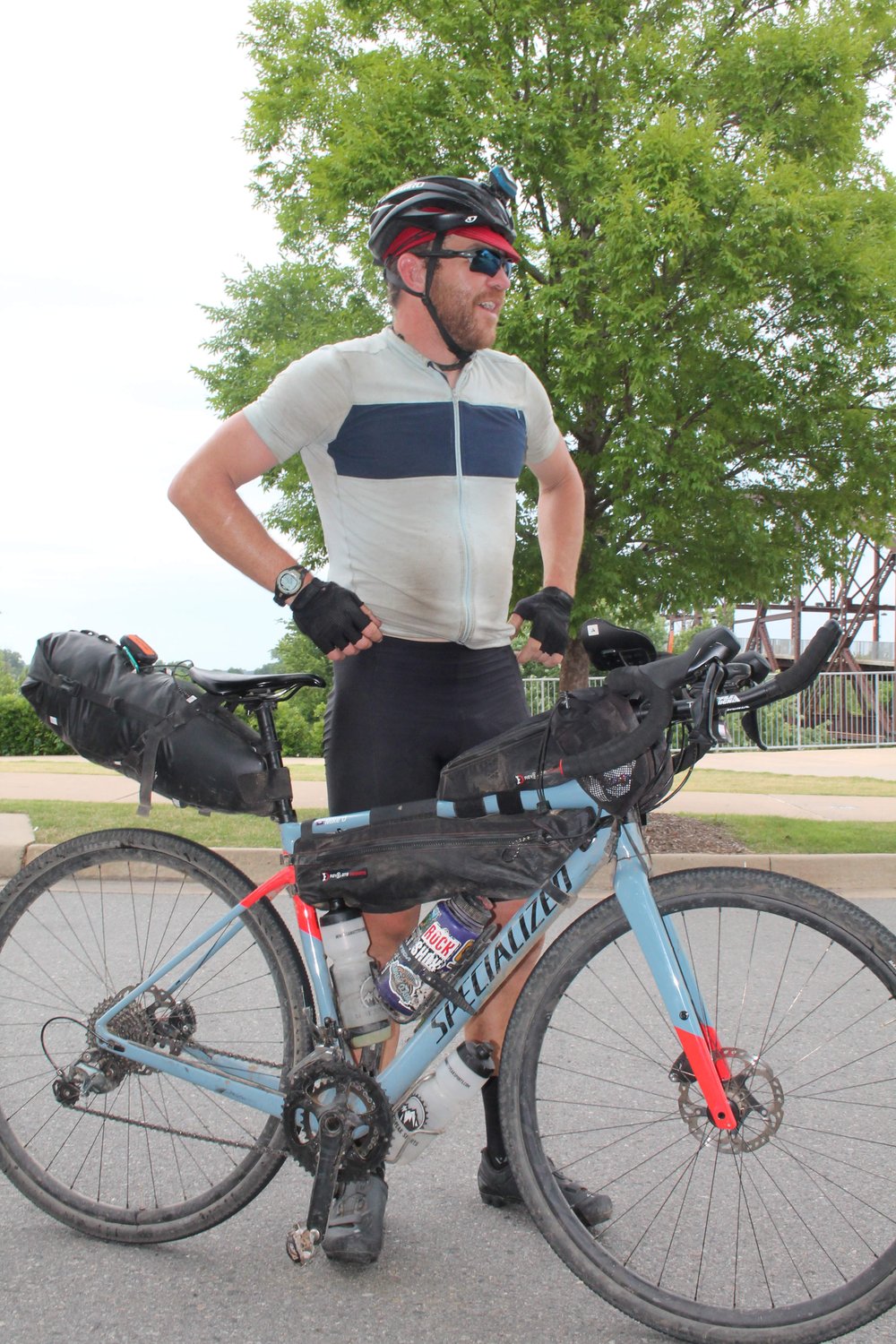 The entire route is 1,171 miles, according to Adventure Cycling. It includes the LOViT and Womble single-track mountain bike trails and two "cutoff" sections that connect the larger loop, Campbell says.

Because some areas were flooded near Conway and had to be cut, the course the High Country racers completed was about 1,013 miles.

Riders had cycling computers on their bikes and also carried a spot tracker that identified them on the course and allowed them to call for help if needed.

Back at the finish, Dicken is talking about the most taxing part of his race.

"The Ozarks were super hard, but the entire thing was really difficult. I knew there was going to be a ton of elevation, but holy smokes! It was up one and down another. Relentless."

He got three or four hours of sleep each night and lost count of the flat tires. "At about 10 or 11 one night I was going into Marble and I swear I hit a road made out of razorblades."

For winning, Dicken was given a handmade belt buckle.

Oh, and a free beer and patch from Stone's Throw Brewery. 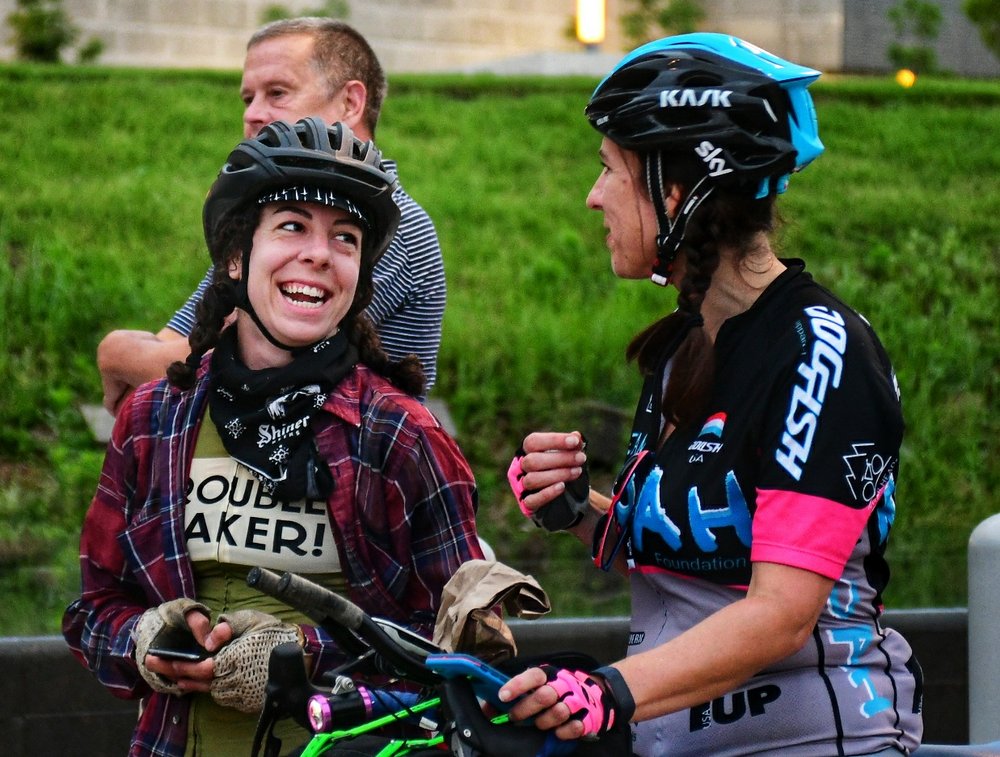 Ally Mabry works for Adventure Cyclist, the magazine published by Adventure Cycling in Missoula, and was one of two women racing (the other was Kate Geisen of Edwardsville, Ill.). Mabry finished at 9:09 p.m. June 16 and was met by friends and family wearing party hats and serving up burritos, watermelon, cheese dip and other goodies.

"It was a huge celebration," she says with a laugh on Wednesday morning. "It was perfect."

The 27-year-old Mabry, who is from Birmingham, Ala., was the first woman to finish and, like Dicken, got a belt buckle for her trouble. She is also the first Adventure Cycling employee to do the route.

"Coming back to the South to do something that hadn't been done before and show people that Arkansas is this amazing, hidden gem was really cool," says Mabry, who rode a steel-framed Surly Straggler. "And to be an ambassador for Adventure Cycling, I think it will be important when people have questions about the route to have that on-the-ground experience."

Campbell not only designed the course (which runs by his house in Russellville — yes, he and other racers stopped there to rest and re-supply), he also promoted and participated, finishing fourth at 4:11 p.m. June 16, about 12 hours after third-place Nathan Griffee of Eureka Springs.

"The thing for me was to just keep going," he says of how he made it to the end on his Trek Checkpoint SL5. "I had 11 flats, and I got sick one day going from Ponca to Witt Springs. I was just sitting on the bike, my stomach churning. I might have picked up a bug in Russellville, or maybe Fayetteville."

Since the race is unsupported, riders found food where they could and stored extra meals and snacks in bags attached to their bikes.

"In other places, there were cafes with homemade sandwiches or burritos, and I'd buy a couple, eat one there, and take the other with me," Rusch told bicycling.com. "And my body craves salt when working this hard, so I like to have Fritos, pickles, salted nuts, and chips on hand."

Mabry started with packages of tuna and salmon and stopped for corn dogs and milkshakes at Sonics along the route. She had the "best peanut butter and jelly sandwich I've ever had" while refueling at Parkside Cycle in Hot Springs.

Volunteers at the Witt Springs Community Center provided hungry and tired racers food, drinks and a place to nap. Dirk Merle of Tilley was one of those lending a hand.

"I just left there," he says Monday afternoon. "One cyclist just stopped and ate and is getting back on his bike now. We've caught every cyclist that's come through. We have bathrooms, showers, cots and a kitchen full of food, everything from frozen burritos to turkey sandwiches to bananas."

The hospitality was a highlight for Mabry.

"You wouldn't expect such small communities to be excited about the race. I wasn't expecting a lot of people to have it on their radar, but hearing that places along the route were excited to see us made me have warm feelings about Arkansas."

The Witt Springs center was open 24 hours during the race and volunteers also kept an ice chest filled with water and Red Bull at Iceledo Gap, between Jasper and Witt Springs, one of the more remote areas of the course.

As for sleeping arrangements, riders often switched between hotels and camping.

Of the 19 who started, 10 finished the race. Geisen, the final rider, rode through the storm Wednesday night to cross the line at 12:26 a.m. Thursday.

A challenge like riding 1,000-plus miles alone is just as mentally taxing as it is physical, Campbell says.

With the first edition of the race complete, Campbell is looking forward to next year and says he is already in talks with a potentially big Arkansas-based sponsor.

He sees the race as a natural progression for cyclists who have competed in something like the Dirty Kanza 200, the popular one-day gravel grinder race in Kansas with various distances — the longest being 200 miles — that started with 34 participants in 2006 and has grown to more than 2,000.

"Dirty Kanza gets all the promotion as the ultimate bicycling challenge," Campbell says. "We can be the next step up."

Mabry paused for a beat when asked if she would return next year.

"I was telling myself I would never do this again," she says. "But endurance cyclists have short-term memory loss ... I don't know."