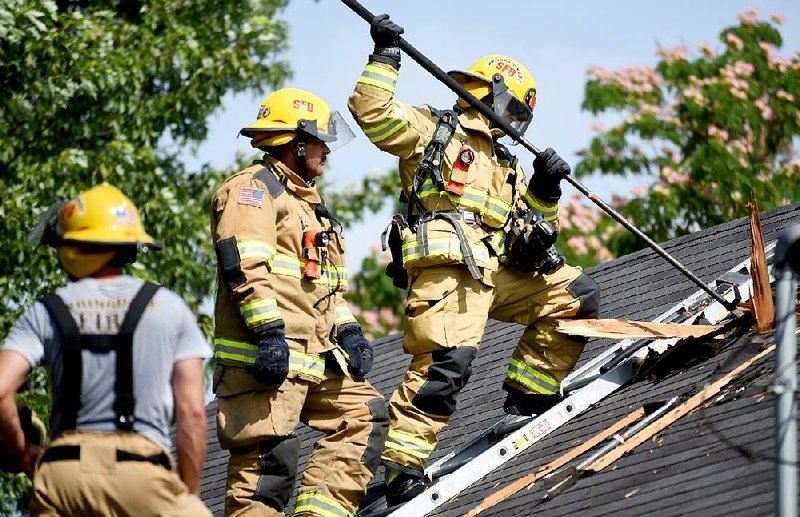 Ryan Anderson, (right), probationary firefighter with the city of Springdale, follows the instruction of driver operator Josh King during vertical ventilation training Friday at a house in Springdale. Several fire departments, including Springdale, will now hire firefighters as young as 18 because of a new law that lowered the minimum age from 21.

ROGERS — More fire departments in Arkansas can hire firefighters as young as 18 in light of a change in state law.

Fire departments governed by civil service commissions were restricted to hiring firefighters 21 years and older, but Act 206 allows individual departments to decide if they want to lower the age to 18. The Legislature passed the law during this year’s session.

In Northwest Arkansas, some departments want to take advantage of the new law. The Civil Service Commission in Rogers voted this week to change the requirement.

Deputy Fire Chief Travis Hollis said the department supported the change because the department misses out on potential applicants. Fire departments not governed by commissions have been allowed to hire people 18 and up.

“It puts us at a disadvantage in our recruiting because we do have non-civil service departments in our area that are hiring some of these guys and gals up when they’re 18, 19, 20,” he said.

Civil service commissions are city boards with nonpartisan appointed members. Commissions are to act as unbiased third parties that regulate police and fire departments and generally set standards for hiring and termination, said Wade Marshall, president of the Arkansas Professional Fire Fighters Association. The 24 commissions in Arkansas are generally in larger cities.

Sandy Brannan, a commission member in Rogers, asked last week whether 18-year-olds would be mature enough for the job. Hollis said the fire academy process is pretty good at weeding out people and pointed out that the military accepts 18-year-olds.

State Rep. Carol Dalby, R-Texarkana, sponsored the legislation after the Texarkana Fire Department approached her about changing the minimum age. She said the Fire Department was losing applicants to other departments, some across state lines, that start hiring at 18.

The Bentonville Fire Department is not governed by a civil service commission and accepts applicants younger than 21.

“We have had a pool that other departments haven’t,” said Battalion Chief Justin Scantlin.

Scantlin said he does not predict the department’s number of applicants will dramatically change because other departments can hire younger firefighters. Many applicants are over 21 regardless, he said.

Marshall said he sees pros and cons with hiring firefighters as young as 18.

Fewer people nationally are applying to be firefighters, and it is likely a combination of multiple factors, Marshall said.

High schools have emphasized trade schools more in recent years. Some jobs that do not require college degrees, such as electrical work or plumbing, pay more than firefighting, he said.

Hollis said he has seen the number of applications drop dramatically over the years, but added that it has increased in the past year because of aggressive recruiting efforts.

Departments used to be able to have a “build it and they will come” approach to hiring, but now have to persuade people to become firefighters, Hollis said.

The lower age requirement will likely encourage more applicants because some get sidetracked with a different career between the ages of 18 and 21 and then never pursue firefighting, Marshall said.

Firefighters in Arkansas have to work for 28 years before they can draw a pension from the state’s retirement program, Arkansas Local Police and Fire Retirement System. Marshall said a potential downside of hiring younger firefighters is they are more likely to retire younger and then draw from the system for longer.

David Clark, executive director of the retirement system, said he does not see the new law significantly affecting the retirement fund because many fire departments already hire people as young as 18.

The Springdale Civil Service Commission will vote in July whether to change the age requirement, said Matt Bagley of the Springdale Fire Department.

Bagley said lowering the age would be beneficial because the department could consider partnering with schools and developing programs for high school students who want to be firefighters.

Staff members have tried to recruit in high schools.

“We hyped it up and then were like, ‘Let me know if you have any questions. I’ll see you in three years,’” Bagley said.

Fire departments typically have one or two hiring periods per year, Bagley said.

Brad Hardin, assistant chief in Fayetteville, and Bagley said they have seen a decline in applicants.

Hardin said his staff has not yet discussed changing the age requirement.