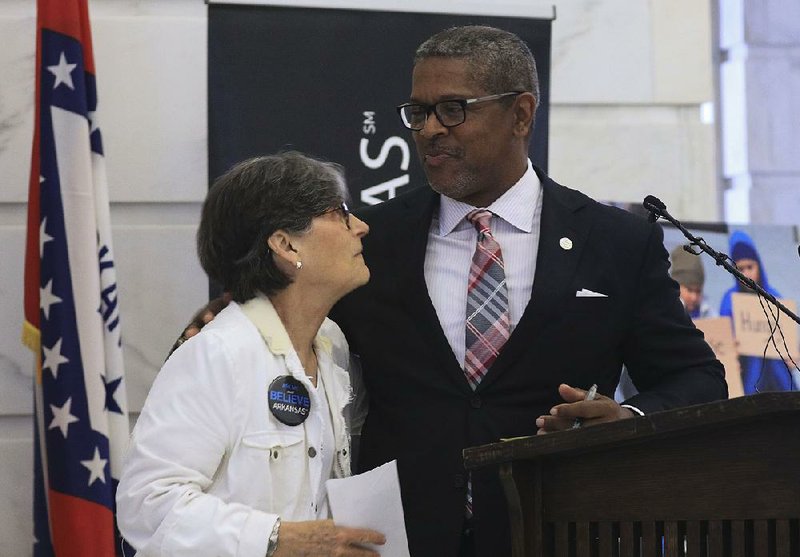 AT&T-related entities are committing more than $100,000 this year to a new initiative called Believe Arkansas to combat hunger in the state, officials for the company announced Monday.

"I am going to call food insecurity for what it is: hunger. These people are hungry," he said at a news conference at the state Capitol, where he was accompanied by Eddie Drilling, AT&T senior vice president of national regulatory external affairs; Gov. Asa Hutchinson; and Kathy Webb, executive director of the Arkansas Hunger Relief Alliance.

Hutchinson said Arkansas has made a great deal of progress in economic development, creating jobs and moving people out of poverty and up the income ladder.

But "even though we have made progress in so many areas, we still remain behind and we lag in terms of food insecurity and this is a serious issue for our state," he said.

The Annie E. Casey Foundation's annual Kids Count recent survey found the number of children in poverty in Arkansas has declined from 165,000 to 156,000, he noted.

Believe Arkansas is an extension of AT&T Believes -- a companywide initiative designed to create positive change in local communities. It is working with the Arkansas Hunger Relief Alliance, Dedman said.

AT&T in Central Arkansas also is offering collection points in its stores -- plus a $10,000 contribution, half from AT&T and half from Telecom Pioneers, an AT&T-supported volunteer organization -- to support the annual KTHV-TV, Channel 11, summer cereal drive, Dedman said.

Later this year, AT&T and Cricket Wireless stores statewide will serve as food collection points to provide "food patrol packs" for police and other first responders to carry in their vehicles and distribute to needy families in the course of their work, he said. 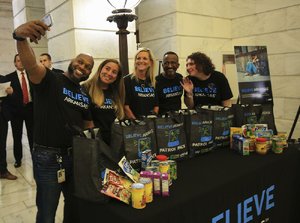 Photo by Staton Breidenthal
Marion King (from left) takes a photo with his fellow AT&T associates Crystal Boling, Sheila Halford, Knoxie Hall III and Amanda Taylor before a news conference Monday at the state Capitol to announce the company’s Believe Arkansas initiative to fight hunger in the state.