Deluge in Arkansas adds to woes in inundated region 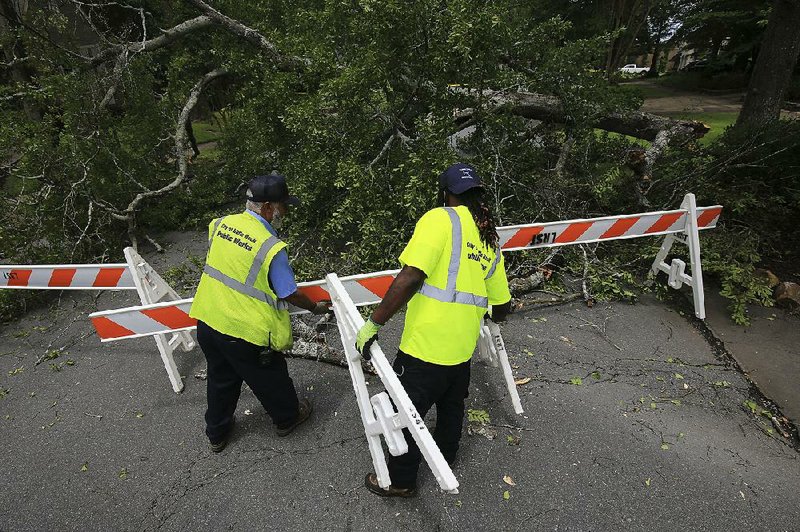 Thomas Robinson (left) and Brandon Cobbs, with the Little Rock Street Department, place barricades Monday afternoon around a tree that fell across Kavanaugh Boulevard near P Street during the latest round of storms. ( Arkansas Democrat-Gazette / Staton Breidenthal)

Heavy rain drenched much of Arkansas over the weekend, washing out some roads and flooding others.

A total of 11.35 inches of rain fell near Waldron in Scott County over a 48-hour period that ended Monday morning, said Brian Smith, a climatologist with the National Weather Service in North Little Rock.

Fort Smith got 2.8 inches of rain Sunday, breaking a record for rainfall on any June 23 in history, said Robert Darby, a meteorologist with the National Weather Service in Tulsa. The previous record for Fort Smith was 1.58 inches June 23, 1948.

A man jumped off the roof of the house when the water took it downstream, and he clung to a tree until he was rescued, Daniels said. 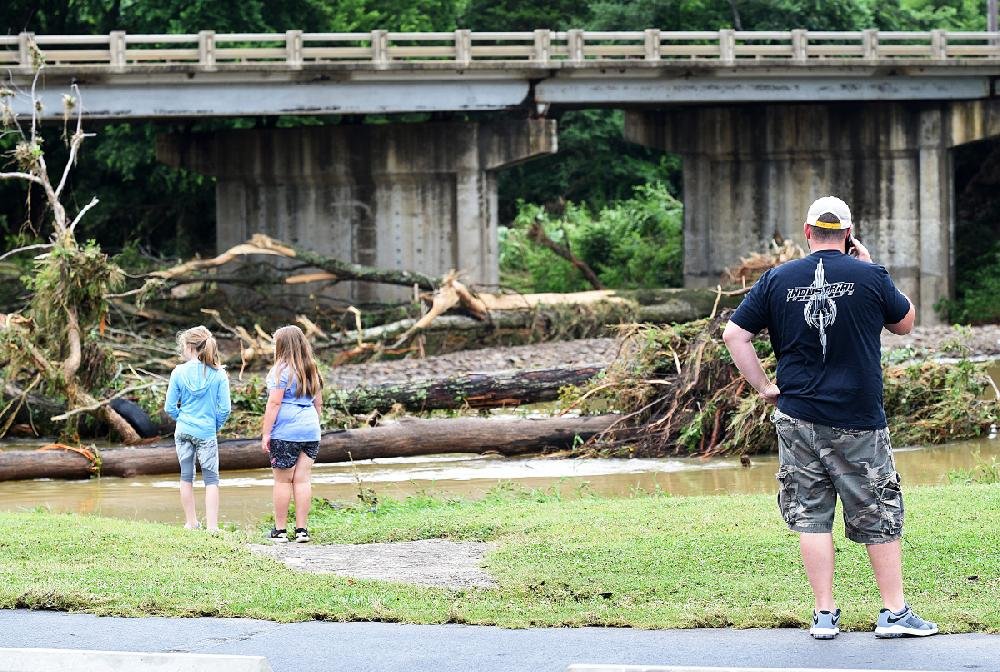 Washington County residents look Monday at the debris that washed from the White River into West Fork’s Riverside Park. Heavy rains caused flooding in parts of Northwest Arkansas over the weekend.

The Missouri Highway Patrol had a boat in the area. Daniels said they rescued the man in the tree and others from the house, but a woman in her 60s was washed downstream with the structure and was still missing Monday afternoon.

"Always in these kinds of situations you want to hold out hope, but it's been 30 hours," Daniels said. "So right now, we're basically looking at it as a recovery effort."

Daniels said he didn't have the woman's name with him Monday. Beaver Branch is a small creek, usually 3 to 4 feet wide and 6 inches deep in summer, he said.

"We're very fortunate that there weren't more lost in this flood because it came up fast," Daniels said.

He said the water took out a section of Anderson's Main Street about 40 feet across and 12 feet deep. It also washed away part of a bridge on Main Street.

Daniels said other houses in Anderson will have to be torn down because floodwater washed the foundations out from underneath them.

In Arkansas, the Washington County sheriff's office posted on its Facebook page a list of roads that were closed because of high water. A section of Hazel Valley Road had washed out.

"Now there's a 7-8 foot drop," according to the Facebook page, which included photos.

The transportation department also listed sections of Arkansas 252 and 255 in Sebastian County as closed Monday because of flooding. Road conditions can be followed at idrivearkansas.com.

Because of heavy rain over the weekend, the U.S. Army Corps of Engineers opened all seven spillway gates on Beaver Lake to 2 feet and 6 inches, which released a total of about 24,600 cubic feet per second of water, said Laurie Driver, a spokesman for the Corps. She said that amount of release would likely continue until Thursday.

"We were hoping we wouldn't have to use our spillway gates, but we got a lot of rain this weekend in the Beaver watershed," she said.

About 70,000 cubic feet per second of water was flowing into the lake, Driver said.

"We cut down on downstream flooding by holding water," she said. "What's coming out of the lake is a non-damaging release." 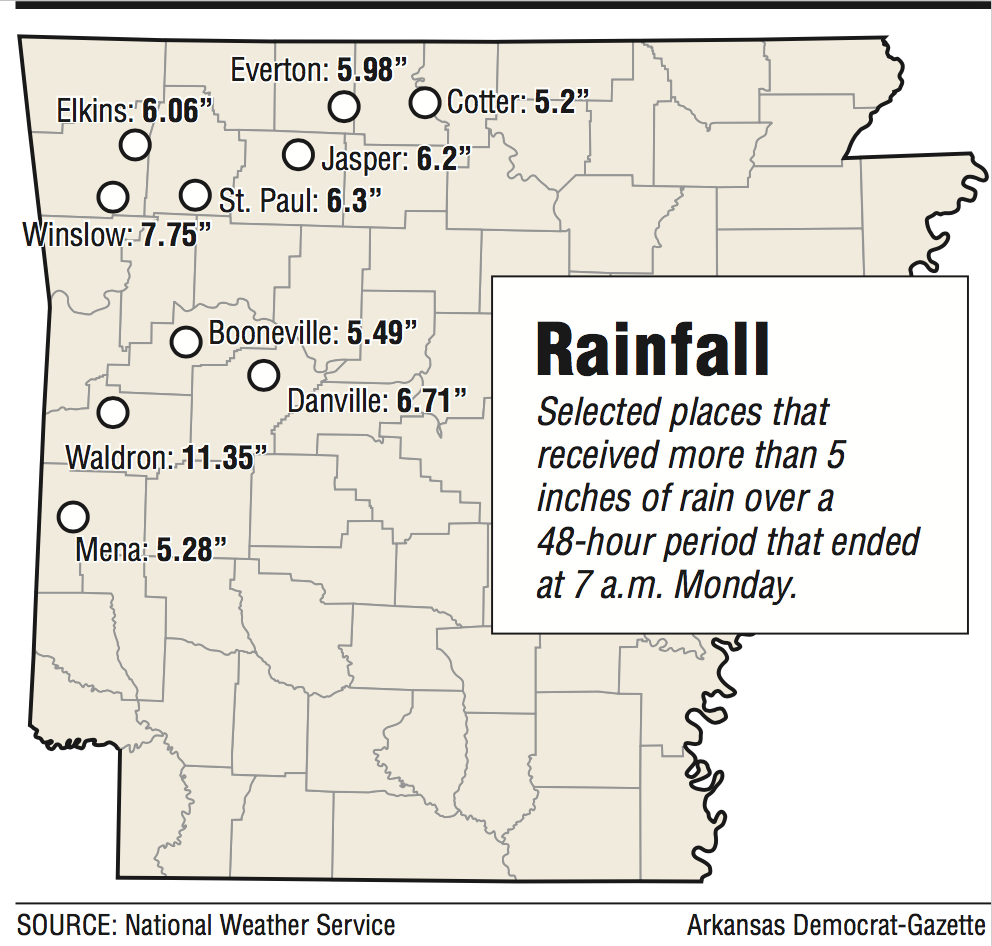 Late Monday afternoon, Driver said the water level of Beaver Lake had increased 2 feet over the previous 24 hours. She said the lake level was at 1,131.07 feet late Monday. The top of the flood pool is 1,130 feet.

Beaver Lake is one of four man-made lakes on the White River that were created by building dams. The others are Table Rock Lake (in Missouri), Bull Shoals Lake and Norfork Lake.

The Corps expects flows to increase along the Arkansas River after heavy rainfall across western Arkansas last weekend.

Water in the Arkansas River was flowing at about 230,000 cubic feet per second Monday at Fort Smith and is expected to peak today at about 270,000 cubic feet per second, according to a second news release from Driver. That's about half as fast as the river was flowing when the area experienced flooding in late May, mostly related to rainfall in Kansas that was being released from Corps of Engineers reservoirs in Oklahoma.

Kerri Case, a spokesman for Entergy Arkansas, said 4,016 customers in the state were without electricity late Monday. That's down from a peak of 82,000 Wednesday night into Thursday morning, when other storms pounded the state.

Case said electricity has been restored to more than 180,000 Arkansas homes over the past few days. She said the company has been constantly working to get power back on, even while storms are still knocking service out in other parts of the state.