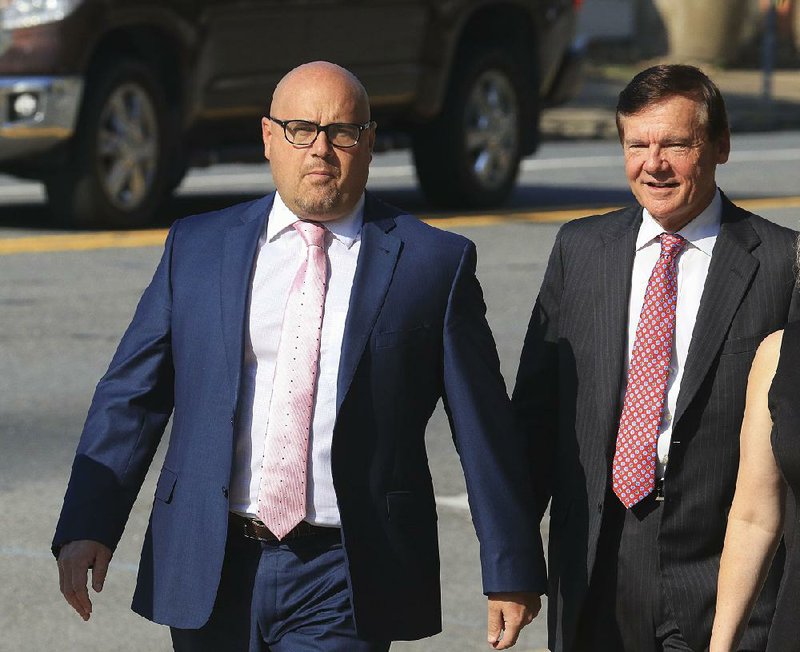 That changed Monday with the filing of court documents in Little Rock, Fayetteville and Springfield, Mo.

On Monday morning, the U.S. District Court docket in Little Rock noted that Hutchinson is scheduled to appear at noon today to change his previous innocent plea regarding charges of misspending campaign funds and filing false income tax returns.

[SIGN UP: Subscribe to free breaking news updates to get the latest on the change-of-plea hearing for former state Sen. Jeremy Hutchinson]

On Monday afternoon, federal prosecutors in Fayetteville filed one count of conspiracy to commit bribery against the 45-year-old, and the ex-legislator indicated his intent to plead guilty to the charge at the same Little Rock hearing today.

A third development Monday was the scheduling of another change-of-plea hearing for Hutchinson, this one in U.S. District Court in western Missouri on July 8.

A change-of-plea hearing usually is held when a defendant who has earlier pleaded innocent reverses that plea to guilty.

In total, Hutchinson has been charged in Arkansas and Missouri with 25 crimes, including receiving bribes, tax fraud and theft from a public program funded by Medicaid.

The newest charge, made public Monday in U.S. District Court in Fayetteville, accuses Hutchinson of accepting $157,000 from four businesses co-owned by an unidentified "Individual A" between February 2014 and November 2016, according to the charging document.

The funds were disguised as legal fees and retainers but were "at least in part" bribes in exchange for Hutchinson taking official actions favorable to the unnamed individual, the document says.

Hutchinson is accused in Missouri of accepting money in a bribery conspiracy with former executives of a large behavioral health care provider for Arkansas Medicaid patients, Preferred Family Healthcare Inc.

Hutchinson's father, former U.S. Sen. Tim Hutchinson, R-Ark., said in an email: "It really wouldn't be productive for me to comment beyond that I continue to be fully supportive of Jeremy and our faith in him is complete."

Legal experts say one change of plea for a defendant like Hutchinson who is charged in several jurisdictions can be a chance to enter into plea deals with all prosecutors on all charges.

Don Ledford, spokesman for the U.S. attorney for the Western District of Missouri, said federal prosecutors in Arkansas and Missouri have "coordinated" their investigations into Hutchinson and others, but he declined to comment further.

Memphis-based attorney Claiborne Ferguson -- a federal criminal defense attorney who practices in Arkansas, Mississippi and Tennessee but has no affiliation with Hutchinson's cases -- said defendants facing multiple cases typically try to resolve them all at one time.

If Hutchinson follows through on the plea change, he will not be formally sentenced today. He could lessen his ultimate prison time depending on how much he cooperates with prosecutors and investigators moving forward, Ferguson said.

Federal judges give "a lot of weight" to defendants who cooperate with the government, even after they've been sentenced, he said.

Despite Hutchinson's scheduled change-of-plea appearances today and July 8, a guilty plea isn't official until a defendant admits guilt and a judge approves, lawyers and legal experts noted in interviews Monday.

The presiding judge may reject pleas after questioning defendants to make sure they agree to all components of the underlying crime.

But in both instances, in 2013 and 2014, Shoffner declined to say she had intent to break the law. The presiding judge rejected her guilty pleas, and a jury later convicted her.

The criminal charges against Jeremy Hutchinson, who served a total of 16 years in the Arkansas House and Senate, are part of a two-state federal probe into political corruption that has ensnared six former Arkansas legislators since January 2017. Hutchinson was chairman of the Senate Judiciary Committee when he resigned after being indicted last year.

More about the charges against Hutchinson, who is a lawyer and nephew of Gov. Asa Hutchinson:

He's accused of stealing more than $150,000 in campaign contributions and lying on his taxes between 2010 and 2017. Friends and family set up a legal-defense fund for him.

The 12 Missouri counts also include conspiracy, honest services fraud and theft from a program receiving federal funds. Hutchinson was indicted alongside former Preferred Family executives Tom and Bontiea Goss, who have pleaded innocent.

• On Monday, Hutchinson was charged in U.S. District Court in Fayetteville with one bribery count in connection with accepting payments from an unnamed individual who co-owned at least four orthodontic clinics throughout the state, in exchange for Hutchinson's providing favorable legislative action.

Official actions taken by Hutchinson include introducing Senate Bill 143 of 2015, referring that bill for interim study and introducing an interim study proposal that aimed to amend the Dental Practice Act, according to the charging document.

SB143 was an empty bill -- its stated purpose was "to clarify the laws governing dental practice" -- that was never filled in with specific legislation, according to legislative records.

The Dental Practice Act required that any specialist licensed by the state dental examiners board, such as an orthodontist, "must limit his or her practice to the specialty in which he or she is licensed," the charging document notes. Licensees who did not follow the "specialist restriction" risked having their licenses suspended or revoked, it says.

Eastern District Chief Judge Brian Miller signed an order late Monday consolidating the two Arkansas cases into one for the purposes of plea and sentencing. Baker will preside over the joined case in Little Rock.

Hutchinson is part of an influential family in Arkansas politics.

In addition to a father who's a former U.S. senator and an uncle who is Arkansas' governor, Jeremy Hutchinson's cousin, state Sen. Jim Hendren, R-Sulphur Springs, currently is president pro tempore of the Arkansas Senate and led efforts last year to adopt new ethics rules for state senators.

Over the past year, alleged co-conspirators implicated Jeremy Hutchinson and others as part of plea deals.

Civil lawsuits have accused him of shoddy or absentee legal work, further entangling the ex-lawmaker.

The eastern Arkansas district case against Hutchinson traces back to 2012, when his ex-girlfriend Julie McGee gave the FBI evidence indicating he had violated campaign finance laws, and she told an agent she believed he was taking money from trial attorney John Goodson in exchange for legislative favors, according to testimony earlier this month.

Hutchinson initially sidestepped the case by agreeing to serve as a confidential informant. He said he had no information to provide on Goodson, who also chairs the University of Arkansas System board of trustees, but the FBI terminated him as a source after finding him to be untruthful and having "questionable relationships" with other FBI targets, witnesses testified.

A federal jury in May 2018 convicted Woods on 15 criminal counts of wire fraud, mail fraud and money laundering. Woods was sentenced to more than 18 years in federal prison.

Cranford pleaded guilty in June 2018 to paying bribes to lawmakers, including Hutchinson on behalf of Preferred Family Healthcare, formerly known as Alternative Opportunities.