A North Little Rock police officer injured an arrestee who needed emergency room treatment for fractured bones during a traffic stop last year, according to a probable cause affidavit filed this week charging the officer with third-degree battery.

The Pulaski County prosecutor's office found that Officer Jon Michael Crowder's use of force "rose to a criminal level" following the Aug. 27, 2018, arrest of a person wanted on suspicion of a felony, a statement by the North Little Rock Police Department said on Thursday.

According to the affidavit, Crowder pulled over a car at 111 W. Pershing Blvd. and was arresting the driver when he lifted the man's arms "up behind his back, pinning his torso to the car."

Dash camera video released by the department shows Crowder tells the driver to step out after he stops.

The footage shows Crowder order the man to put his hands on the car as another officer walks over.

As the officers are arresting the man, Crowder asks why the arrestee has handcuffs. The man responds: “Because I’m [expletive] kinky, dude.”

Crowder immediately lifts the man’s arms up, and the man screams in pain, yelling “you broke my [expletive] arms, man!”

He tells him to stand still.

“If you move again, I'll have to do what I did before,” Crowder tells the man.

Crowder said in the video that the suspect wasn’t following his orders when he turned away from him while he ordered him to the car. “If you would have had a gun or something on you, it’d have gone real south for you,” he is heard telling the man.

The arrestee, whose name was redacted from the affidavit, went to the hospital and was found to have "mildly displaced fractures of the ulna bone in both elbow joints," Lt. Patrick Thessing wrote in the affidavit. 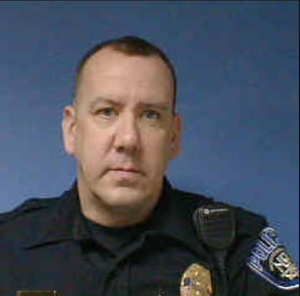 Police arrested Crowder on Thursday on suspicion of third-degree battery, a misdemeanor.

"Giving officers the authority to use reasonable force and protect the public requires monitoring, evaluation and careful balancing of all interest," said North Little Rock Police Chief Mike Davis in a statement. "As always, we realize that to be effective in an ever-changing world, training and education must continue throughout an officer’s career."

The department said it suspended Crowder for 30 days in October after finding he violated internal policies.

The person Crowder arrested was suspected of a felony charge, but a statement by the department didn't say what the person was charged with.

A North Little Rock police spokeswoman said Crowder was currently on paid administrative leave. He’s been an officer with the department since 2002, she said.

County prosecutor Larry Jegley declined to comment on the charge but pointed to details available in the affidavit.

Crowder didn’t appear to be an inmate at the county jail, and online court records didn’t list if he has an upcoming court appearance.