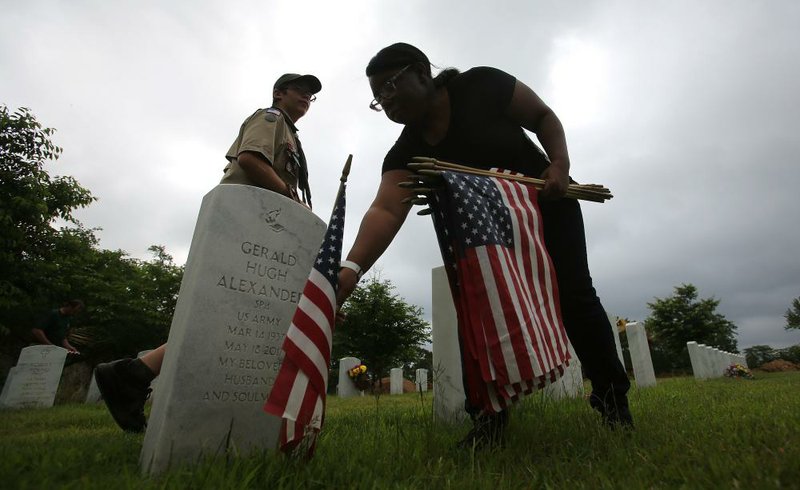 WASHINGTON -- The National Defense Authorization Act that passed in the U.S. Senate on Thursday would increase the size of the Arkansas State Veterans Cemetery in North Little Rock.

The $750 billion defense bill, which was approved 86-8, calls for 141.5 acres to be transferred from Camp Joseph T. Robinson to the state of Arkansas.

The land would be designated for veterans' burials. In the event the property was ever used for any other purpose, the defense secretary would be empowered to retake the property.

The state's two U.S. senators, John Boozman of Rogers and Tom Cotton of Dardanelle, have championed the land transfer, introducing stand-alone legislation earlier this year. In the House, U.S. Rep. French Hill, a Republican from Little Rock, has sponsored a companion piece of legislation, which is supported by the three other House members from Arkansas.

The cemetery, which opened in 2001, has 82 acres. Located on West Maryland Avenue, it is across from the city airport and a short distance from federally owned military property.

Over the past 18 years, thousands of veterans have chosen to make it their final resting place.

"It's a very, very nice area. It's done much better, I think, than anybody expected," Boozman said in an interview.

The property is overseen by the Arkansas Department of Veterans Affairs.

If the land transfer is approved, "this should give them plenty of space for many years to come," Boozman said. "It's something I think will make a huge difference to the state veterans cemetery in the future."

The bill also authorizes additional funding for the nation's troops: a 3.1% pay increase is included in the legislation.

In addition, the bill would authorize a land exchange between the U.S. Army and the National Park Service, a swap that will allow for the enlargement of Arlington National Cemetery.

It includes other measures championed by Cotton. One measure seeks to crack down on Chinese drug companies that knowingly sell synthetic opioids to drug traffickers. Another requires that home-schooled students have access to JROTC programs. A third seeks to remove barriers to occupational certification that some military spouses face when they move to a new state.

A fourth would allow Medal of Honor winners and former prisoners of war, regardless of rank, to be buried at Arlington National Cemetery with full military honors.

The Senate version of the defense act does not remove the "widow's tax."

Current law forbids spouses from collecting Survivor Benefit Plan insurance that their military partners paid into, if the widows also qualify for a Veterans Affairs benefit called Dependency and Indemnity Compensation. The VA benefit is paid in cases in which military members died while on duty or of service-related causes later.

The Dependency and Indemnity Compensation Offset, or widow's tax, reduces survivors' incomes on average by almost $8,000 per year, according to federal estimates.

A federal law, 10 U.S. Code 1451 (c)(2), withholds full survivor's benefits from more than 65,000 military widows and widowers, preventing them from collecting most of the paid-for annuities they and their spouses counted on.

Widows affected by the measure have tried for years to get the law changed.

Information for this article was contributed by Lisa Hammersly of the Arkansas Democrat-Gazette.