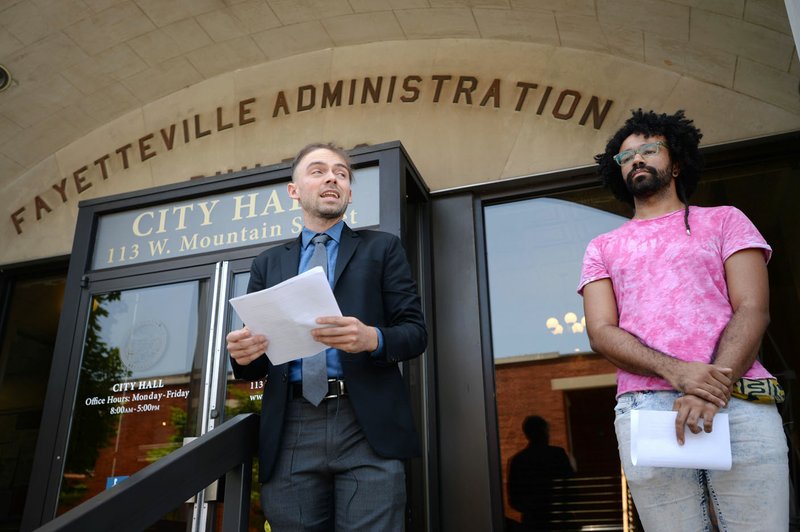 NWA Democrat-Gazette/ANDY SHUPE Stephen Coger (left), director and founder of the Arkansas Justice Collective, speaks Thursday on the steps of City Hall with Cory Perry after the group studied marijuana-related arrests in Fayetteville over several years. A 2008 vote made city policy on misdemeanor marijuana arrests a low priority.

FAYETTEVILLE -- A nonprofit law firm and advocacy group called Thursday for the city's law enforcement to improve its practices regarding marijuana.

Members of the Arkansas Justice Collective, which specializes in immigration law and takes up causes for vulnerable populations, held a news conference in front of City Hall. The group unveiled the findings of a report it made detailing marijuana arrests or citations in the city.

Of the misdemeanors, 50 arrests were made for possession only. In 2018, the police made 192 possession-only arrests, according to the study. That was a 284% increase in arrests for possession comparing the two years.

Stephen Coger, executive director of the collective, said the numbers aren't in line with the intent of the ordinance or the city's population growth.

"The city could do better today, but they need some inspiration in the form of public pressure," he said.

The report calls for the police to end misdemeanor marijuana arrests; form an advisory committee to ensure fair policing and prosecution; cut off money to the 4th Judicial Drug Task Force, of which the city's Police Department is a part; and drop charges for anyone facing simple marijuana possession.

City Attorney Kit Williams said he's recommended the city prosecutor decline to prosecute anyone found to be in possession of less than an ounce of marijuana, if that's the sole offense. Williams said the two began discussing the matter when a statewide ballot measure to allow medical marijuana passed in 2016.

"I've never been in favor of incarcerating people," he said. "Any way that we can try to keep them out of jail, and yet still protect everybody, is what we should do." 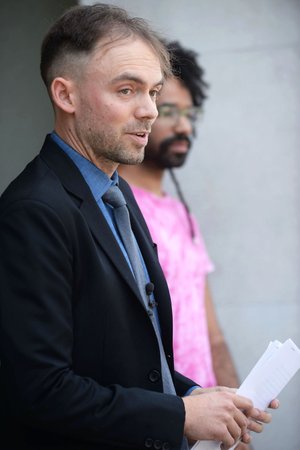 NWA Democrat-Gazette/ANDY SHUPE Stephen Coger (left), director and founder of The Arkansas Justice Collective, speaks Thursday on the steps of the Fayetteville city administration building alongside Cory Perry after the group studied marijuana-related arrests in Fayetteville over 10 years after a change in city policy to make such arrests a low priority.

The group compiled the report using raw data from city police listing arrests and citations for marijuana from 1999 to 2018. The raw data counts each offense associated with an individual person as an arrest.

The group refined the numbers for 2008 and 2018 to count actual instances of arrest, and put those in the report, Coger said. The report categorizes citations the same as arrests, as the raw numbers do. The recipient of a citation doesn't go jail when one is issued, as opposed to an arrest.

"It doesn't mean we have to ignore it and we can't arrest somebody," Tabor said.

The department's raw numbers may not be complete, said Brian Thomas, city prosecutor. A 2013 state law made expunging and sealing records for minor marijuana offenses much easier, so people convicted of such offenses wouldn't need an attorney to get the record wiped clean. An arrest prior to 2013 could be expunged.

The information the department provided to the group doesn't include those expunged records, Tabor said. That means the actual numbers from 2008 could be higher than the numbers the department has available, which would make the disparity compared to 2018 smaller, he said.

The report also expressed concern about an imbalance of arrests of minorities compared to the population of the city.

The report states 142 of the 541 people, or 26 percent, arrested for misdemeanor marijuana possession last year were black. The black population of Fayetteville last year was about 5,986 or 7%, according to U.S. Census data. The percentage of Hispanic misdemeanor offenders was 6%, or 30 people. The Hispanic population of the city is 8 percent. The percentage of white misdemeanor offenders was 66%, the report says, compared to an 78% white population.

As far as racial breakdowns, Tabor said the information provided by the department didn't count just Fayetteville residents arrested or cited. The lists account for anyone the department encountered, which includes people who live outside the city, he said.

Coger said his group has met with city officials, and both have expressed similar goals when it comes to marijuana policing.

"I'm hoping if we get public pressure, not only will our words align but the actions will align," he said.

To read the report, go to:

A public meeting is scheduled on the topic of marijuana policing in the city.