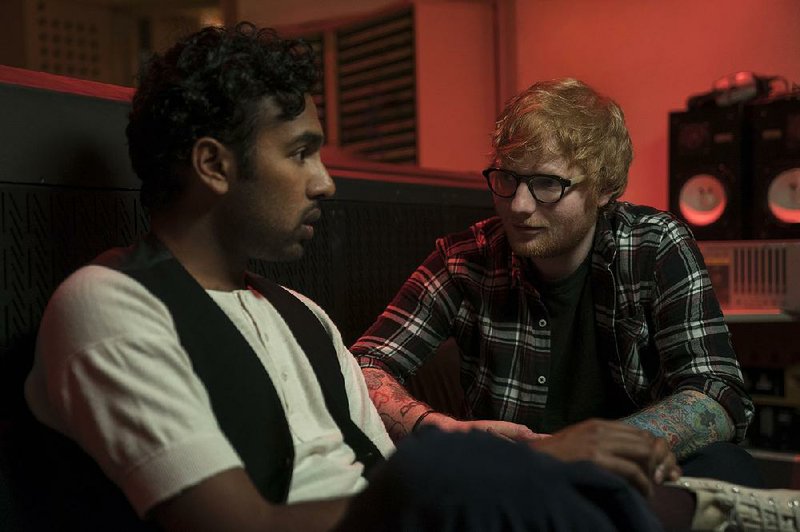 In an interview broadcast shortly after John Lennon's murder in 1980, the Beatle said some of the songs he'd written seemed to come from somewhere outside of himself. He sometimes wondered if he should get credit for them.

As anyone who was around when the Beatles performed or rehearsed could tell you, Lennon, McCartney, George Harrison and Ringo Starr worked awfully hard to put their sonic ideas into to the world. Maybe they became so much a part of the culture that Lennon felt odd taking credit. The Beatles belong to the world.

It's hard to conceive of a world without the Beatles. In Yesterday, screenplay writer Richard Curtis (Four Weddings and a Funeral, Notting Hill, Love Actually) tries to imagine that possibility.

Actually, the Beatles are still a force at the beginning of the film, and they intimidate just about any musician who has played after them, especially another British tunesmith named Jack Malik (Himesh Patel). Whereas the Fab Four ended up creating an empire of their own, Jack is lucky to have someone attend his gigs other than his devoted manager Ellie (Lily James).

Jack has a fine voice and can play guitar and keyboards well, but his own songs are tedious and banal. Perhaps the only reason Ellie still hustles to book gigs for him is their mutual but unrequited, crush.

Jack's obscurity ends when a massive power failure strikes the globe. One small side effect is that when the streetlights go dark, Jack gets hit by a bus. As he recovers, Jack slowly learns that he's the only person in the world who remembers John, Paul, George and Ringo. When he mixes in a Beatles cover during his set, audiences think it's his song. All of the band's record albums, CDs and sheet music have vanished, and even a Google search can't resurrect them.

During the early portions of the film, Yesterday coaxes several chuckles because being a fan of the Beatles doesn't make one an expert. With only his own memory to consult, Jack struggles to piece together lyrics that are no longer online or in print. He does, however, sense that "Hey Dude" doesn't work as well as "Hey Jude," even if Ed Sheeran (playing himself) thinks it's an improvement. "Eleanor Rigby" may be a haunting song, but it simply doesn't fall together.

Jack's ascent is funny, but Curtis wrestles with how to deal with stealing songs from musicians who now exist only in Jack's head. Curtis' attempt to pair the mythical band to the men who played in it falls flat because many of their tunes like "Penny Lane," "Hey Jude" and "We Can Work It Out" were tied closely to their lives and their roots in Liverpool.

Curtis might have found more comic fodder by having Jack try to explain how he could write songs that refer to streets in a city where he doesn't live or why he's performing "Back in the U.S.S.R.," which fell before he was born. Curtis never resolves how Jack deals with calling the Beatles' songs his own, and the film drags as Yesterday struggles to make Jack's guilt more entertaining.

Thankfully, Patel can sing the Beatles' songs with conviction. It also doesn't hurt that he has recorded them at Abbey Road, the studio where the Fab Four themselves cut most of their albums.

Kate McKinnon is a riot as record company executive Debra Hammer capitalizing on the world's amnesia. It's tempting to wonder if she has memorized Pink Floyd's "Have a Cigar," because she perfectly embodies the song's glad-handing, back-stabbing suit who's so happy she can hardly count. Her shamelessness at cashing in on the talent of others is a lot funnier than Jack's brooding between songs.

Curtis and director Danny Boyle should have focused more on her entertaining crassness, but with a cornucopia of unforgettable tunes available, it's understandable why the two couldn't simply let it be.