Reporters’ election queries prompt his remark to Putin by Compiled by Democrat-Gazette staff from wire reports | June 29, 2019 at 4:30 a.m. 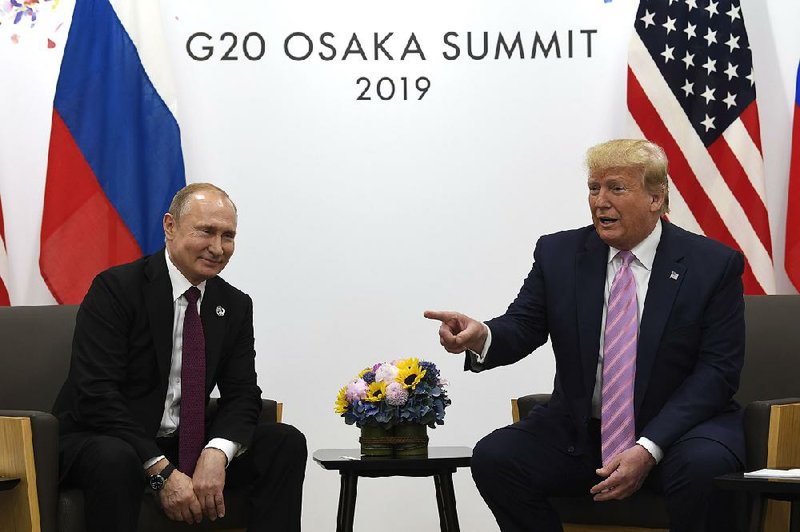 On Friday, as President Donald Trump Russian President Vladimir Putin sat down with reporters, Trump gave Putin a seemingly humorous warning to stay out of U.S. elections. Earlier, Trump and Putin were heard discussing their dislike of journalists.

OSAKA, Japan -- President Donald Trump on Friday appeared to make light of Russian election interference, telling President Vladimir Putin with a grin during a bilateral meeting, "Don't meddle in the election," after reporters asked questions about the topic.

Trump met with Putin on the sidelines of the Group of 20 summit but he did not initially raise the topic during brief remarks in front of reporters, calling their relationship "very, very good." He said the two would discuss "trade, including some disarmament, some little protectionism perhaps -- in a very positive way."

"We look forward to spending some very good time together," Trump said after the two sat down next to each other, flanked by their aides. "A lot of positive things are going to come out of the relationship."

Putin noted that the two had not met since their first formal summit in Helsinki last summer and said the conversation in Osaka would be a "great opportunity to follow up on that."

At that point, American reporters in the room began shouting questions about whether Trump would warn Putin not to meddle in future U.S. elections. "Yes, of course I will," Trump replied. As reporters were being ushered out, Trump grinned and said: "Don't meddle in the election."

Raising his right index finger toward Putin, Trump repeated himself, while turning to watch the reporters depart.

When reporters first entered the room, Trump and Putin could be seen smiling as they discussed their mutual dislike of the news media, according to reporters in the room and a video posted by a service owned by RT, a Russian state TV network.

"Get rid of them. Fake news is a great term, isn't it. You don't have this problem in Russia but we do," Trump said, according to Reuters.

"We also have. It's the same," Putin responded in English. Under Putin's government, media freedoms have been greatly curtailed.

Trump and Putin met for 90 minutes, mostly without any journalists present.

Trump, who has withdrawn the United States from the Intermediate-range Nuclear Forces Treaty of 1987, and whose national security adviser has signaled that he would not extend the New START treaty signed with Russia in 2010, has been interested in negotiating a three-way arms pact with Russia and China.

Putin has not ruled out such an accord, but he has noted that China has only a fraction of the nuclear weapons that the United States and Russia have. Sergey Lavrov, the foreign minister, welcomed Trump's outreach. "We are ready for cooperation to the extent the States are ready to get involved in it," he said.

The White House summary of the leaders' meeting indicated that they talked about such an accord as well as Iran, Syria, Venezuela and Ukraine.

Asked about the invitation, the White House said in an email: "The President believes it's important to commemorate the Allied troops who lost their lives in WWII, as he said in June during the D-Day events in the UK and Normandy, but he has not confirmed participation."

Kremlin spokesman Dmitry Peskov told reporters that an official invitation would be sent to Trump "in the coming days."

Trump also met with Chinese President Xi Jinping today as China and the U.S. are locked in an escalating trade war.

As he began the meeting with Xi, Trump said he wanted to strike a deal that would even up the U.S.-China trade relationship.

"We want to do something that will even it up with respect to trade," Trump told Xi. "I think it's something that's actually very easy to do. I actually think that we were very close and then something happened where we slipped a little bit, and now we're getting a little bit closer. But it would be historic."

Xi opened the meeting with a reference to the pingpong diplomacy in the 1970s that paved the way for formal diplomatic ties between the U.S. and China.

"China and the United States both benefit from cooperation and lose from confrontation," Xi said in prepared remarks.

Trump had signaled that the U.S. had made progress in trade discussions with China ahead of the lunch meeting in Japan, which comes amid growing hopes the two powers will hit the pause button in their trade war and resume the search for a longer-term peace.

The president has threatened to impose tariffs on an additional $300 billion in Chinese imports -- on top of the $250 billion in goods he's already taxed -- extending his import tariffs to virtually everything China ships to the United States. He has said the new tariffs, which are paid by U.S. importers and usually passed onto consumers, might start at 10%. Earlier, the administration had said additional tariffs might reach 25%.

The two countries are sparring over the Trump administration's allegations that Beijing steals technology and coerces foreign companies into handing over trade secrets. China denies it engages in such practices. The U.S. has also tried to rally other nations to block Chinese telecom firm Huawei from their upcoming 5G systems, branding the company a national security threat and barring it from buying American technology.

Beijing has retaliated by levying its own tariffs on goods from the United States. On Friday, it criticized what it calls "negative content" about China in legislation before the U.S. Congress, saying it would further damage relations already roiled by disputes over trade and technology.

While prospects for detente in the trade war between the U.S. and China are in the spotlight, many participating are calling for a broader perspective in tackling global crises.

"This will be a difficult G-20, there are global challenges to be met, we need to step up to avoid the climate threats, ... reform the World Trade Organization and prepare for the digital revolution," Donald Tusk, president of the European Union Council, said at a meeting with Japanese Prime Minister Shinzo Abe.

Xi also met with Abe on Thursday evening, seeking a breakthrough after years of strain over territorial disputes. It is his first visit to Japan since he became China's top leader in 2013.

A visit by Xi to North Korea last week raised hopes for some movement in the impasse with the U.S. over the North's nuclear program. Trump is due to visit South Korea after leaving Japan.

He tweeted that after the summit: "I will be leaving Japan for South Korea (with President Moon). While there, if Chairman Kim of North Korea sees this, I would meet him at the Border/DMZ just to shake his hand and say Hello(?)!"

Later today, he said "All I did is put out a feeler, if you'd like to meet." He added that "I just thought of it this morning."

White House officials, who had previously ruled out such a possibility before the trip, did not immediately respond to requests as to whether Kim had already agreed to meet with Trump.

Trump did not address Khashoggi's killing. In his remarks, Trump called it a "great honor" to be with the crown prince and noted that "Saudi Arabia is a good purchaser of American products."

Trump was also set to meet with Turkish President Recep Tayyip Erdogan, an ostensible NATO ally whom the U.S. sees as drifting dangerously toward Russia's sphere of influence. 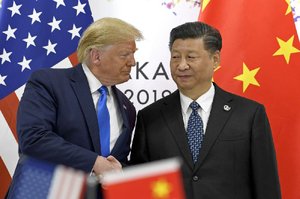 Photo by AP/SUSAN WALSH
President Donald Trump and Chinese President Xi Jinping pose before a side meeting today at the Group of 20 summit in Osaka, Japan. Trump said he hoped to strike a trade deal with China that would “even it up.” 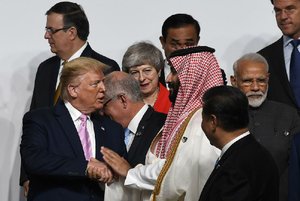 Photo by AP/SUSAN WALSH
President Donald Trump shares a moment with Saudi Crown Prince Mohammed bin Salman as officials gather for a group photo Friday at the Group of 20 summit in Osaka, Japan. 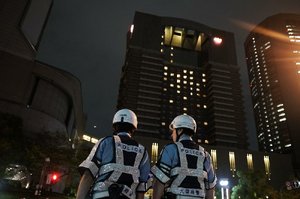 Photo by AP/JAE C. HONG
Japanese police officers keep watch Friday outside the hotel where President Donald Trump is staying during the summit.