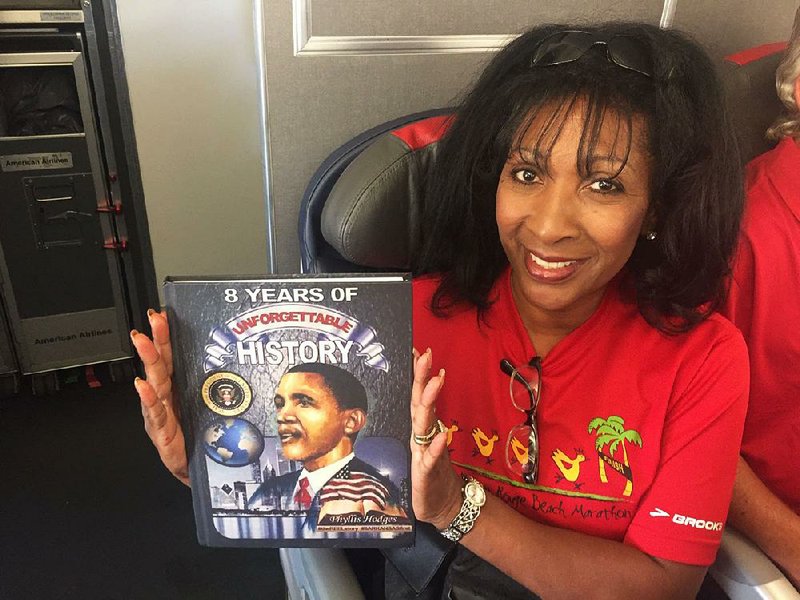 Phyllis Hodges shows her book during her stop in Washington.

While in Washington, they heard from high-profile Democratic presidential candidates and attended workshops focused on topics ranging from health care to systemic racism.

The Rev. Martin Luther King Jr. was working to organize a Poor People's Campaign in Washington in 1968; an event that took place despite his assassination in Memphis in April of that year.

"Fifty-one years after workers of every background marched for their dignity, bringing the priorities of America's neediest families to the nation's capital; 51 years later, America is still a land of stunning injustice," she said in her prepared remarks.

U.S. Rep. Steve Womack, a Republican from Rogers, said problems remain, despite decades of efforts and trillions of dollars in federal spending.

"If history is any indicator, more spending, bigger government, and higher taxes -- the solutions that have too often been proposed by some of our Democrat colleagues -- are not the tools we need to truly move the needle," he said, according to a copy of his written remarks.

"All of us are deeply committed to helping to end systems of poverty, racism, militarism or the war economy, ecological devastation, environmental injustice, distorted and immoral narratives and we're trying to also end voter suppression," she said.

The Securities and Exchange Commission has named an Arkansan, Holli Heiles Pandol, as director of its Office of Legislative and Intergovernmental Affairs.

She takes to the job a facility with numbers and a familiarity with Capitol Hill.

She previously served as the office's senior counsel.

A native of Star City, Pandol majored in finance and accounting at the University of Arkansas, Fayetteville, later earning a juris doctorate in Fayetteville as well; both times, she graduated with honors.

Since moving to Washington, she's continued her studies, obtaining a master of laws degree from Georgetown University Law Center.

Pandol, who will serve as a liaison between the Securities and Exchange Commission and Congress, is familiar with the Capitol's corridors.

She worked there for more than five years, serving initially as legislative director and tax counsel for then-U.S. Rep. Tim Griffin, R-Ark., and later acting as senior adviser and counsel to U.S. Rep. French Hill, R-Ark.

Right before joining the Securities and Exchange Commission, she served as counsel for the House Financial Services Committee.

"Holli is a committed public servant who has worked tirelessly for the people of Arkansas in her various roles on the Hill," said Hill, a former Little Rock banker who serves on the committee. "Her deep understanding of financial and regulatory policy makes her a valuable asset for the American people in her new role at the SEC."

"She's not only smart as a whip, but she's so easy to get along with and easy to work with. And that is just a powerful, powerful combination," he said.

The journey included stops in New York City as well as Washington, D.C.

Given her love for the written word, she made side trips to bookstores and libraries, stopping by the Library of Congress as well as the FBI Library.

Before departing the Quantico, Va., facility, she gave it a copy of her book, 8 Years of Unforgettable History.

Hodges' jam-packed journey was "fabulous, but crazy at the same time," she said. "The traffic was something like I'd never seen in my life. It was horrible."

The people, on the other hand, were warm and welcoming, she added.

White House tours were canceled when Hodges was there, but she was able to visit the White House grounds, she said. "We took pictures galore, so we still had a great time."

Given time constraints, she wasn't able to track down a copy of her book at the Library of Congress, she said. But a worker told her that it's in the system.

Hodges' book portrays former President Barack Obama on the cover, and it contains information about his groundbreaking presidency.

Hodges interviewed each of the subjects herself.

Since the White House wasn't open for tours, she wasn't able to drop off a copy of the book.

That'll have to wait until next time, she said.