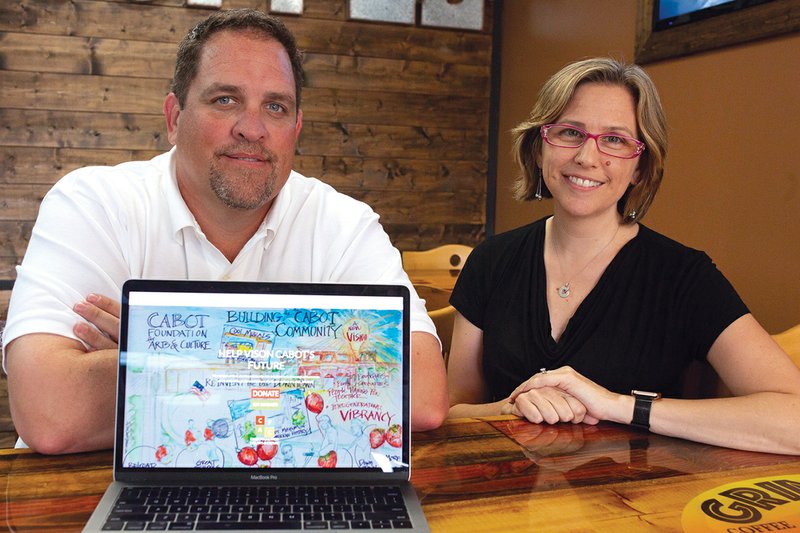 John Rudd, left, and Rebecca Williams are president and vice president, respectively, of the new Cabot Foundation for Arts and Culture. The foundation aims to listen to Cabot citizens and form a plan to improve Cabot as both a place to live and a place to visit.

CABOT — Thousands of people call Cabot home, but to much of the state, it is just one of the cities along U.S. 67/167 just north of Little Rock. A group of citizens is working to change that mindset, though, hoping to make it easier for Cabot residents to work, shop and play in their own city and make it a destination for others.

“When you open a magazine about Arkansas, we want Cabot to be in there,” said Rebecca Williams, local business owner and vice president of the newly formed Cabot Foundation for Arts and Culture. “We want to be a destination.”

The Cabot Foundation for Arts and Culture is a nonprofit organization whose mission is to “encourage and promote community through the advancement of arts and culture in Cabot, Arkansas.”

John Rudd, another business owner and president of the foundation, has lived in Cabot for 20 years and is excited to see it become a place where families not only live, but work, play and shop.

“We have the kids and families. Right now, that is our identity,” Rudd said. “Outside of youth sports, we spend a lot of time seeking other communities to fill that void. We’re looking, through inspiration from the people, to work with the city to fill those voids. We just want to experience life and experience Cabot.”

The foundation, which Rudd and Williams founded, along with Lori Walters, sees art and culture as a way to improve and develop a community, and that’s what they want for Cabot — not a total change, but an enhancement for the benefit of the residents.

“There are lots of things that we don’t want to change,” Rudd said. “The family culture we have here is amazing. One thing we focus on is sports, but outside of sports, we have kids who are artistic, love reading, are interested in technology. There are different ways that kids can demonstrate their talents, and that’s what we want to focus on.”

The foundation has partnered with Uncommon Communities at the Winthrop Rockefeller Institute to strategically look at community development and how it could be implemented in Cabot.

Williams and Rudd said they want all of this to be citizen-led, with the people of Cabot voicing their opinions and coming together — eventually with elected and appointed officials — to make progress on improving the community.

“[Uncommon Communities’] mission statement is to empower citizens to take a leadership role in the future of their communities,” Williams said.

The foundation has already started its work, meeting with city residents about what they want to see for the future of Cabot.

The foundation, along with the Cabot Advertising and Promotion Commission, brought Manheimer and McClure Placemaking in to help set up a plan on how to accomplish the foundation’s goals for Cabot.

“Two weeks ago was the beginning,” Williams said. “[McClure] came in, and we met with over 100 citizens, did a city tour with business leaders and elected officials. It was so nice. You just felt the vibe.”

McClure is developing a placemaking roadmap, which is essentially an action plan to gather and condense all of the thoughts and opinions people have about the future of Cabot, then make step-by-step strategies to make the plan happen.

Rudd said it was apparent that the citizens of Cabot have opinions about the future of their city — many of which are common across large groups of people.

“It was powerful to see that many people come together for no other reason than to be asked, ‘How do you see your Cabot? What do you want here?’” Rudd said. “There were so many different ideas, but there were so many common ideas. It was amazing, between large employers and ‘Common Joe’ citizens, how many things were in common.”

All of those voices are necessary to move Cabot forward, Williams and Rudd said. While they are using McClure to help get a placemaking roadmap in place, the whole project is going to be citizen-driven.

“We’ve got a boots-on-the-ground person who’s working with McClure. She lives in Little Rock and is in Cabot 20 hours a week, starting next week, just talking to people,” Williams said.

Megan Grubb, an intern from the University of Arkansas Clinton School of Public Service in Little Rock, has already started gathering input from residents to help the foundation and McClure develop their action plan for Cabot. Rudd said the input is vital to the process.

This effort will be ongoing, Rudd and Williams said. Once the foundation gets citizen input, it will go to a steering committee to narrow down the input to the top few things people want to see.

“It will be their responsibility to say, ‘No, we can’t have a roller coaster in downtown Cabot. It sounds great, but instead we can do A, B, C and D,’” Rudd said. “After that, McClure will come back in to look at our few realistic possibilities and see how we can get the funding through grants. They go as far as preparing the business plan for said entrepreneur who wants to invest.

All of this will happen over the next six months or so, and the final plan will be a website that citizens, business owners and anyone else who is interested can view.