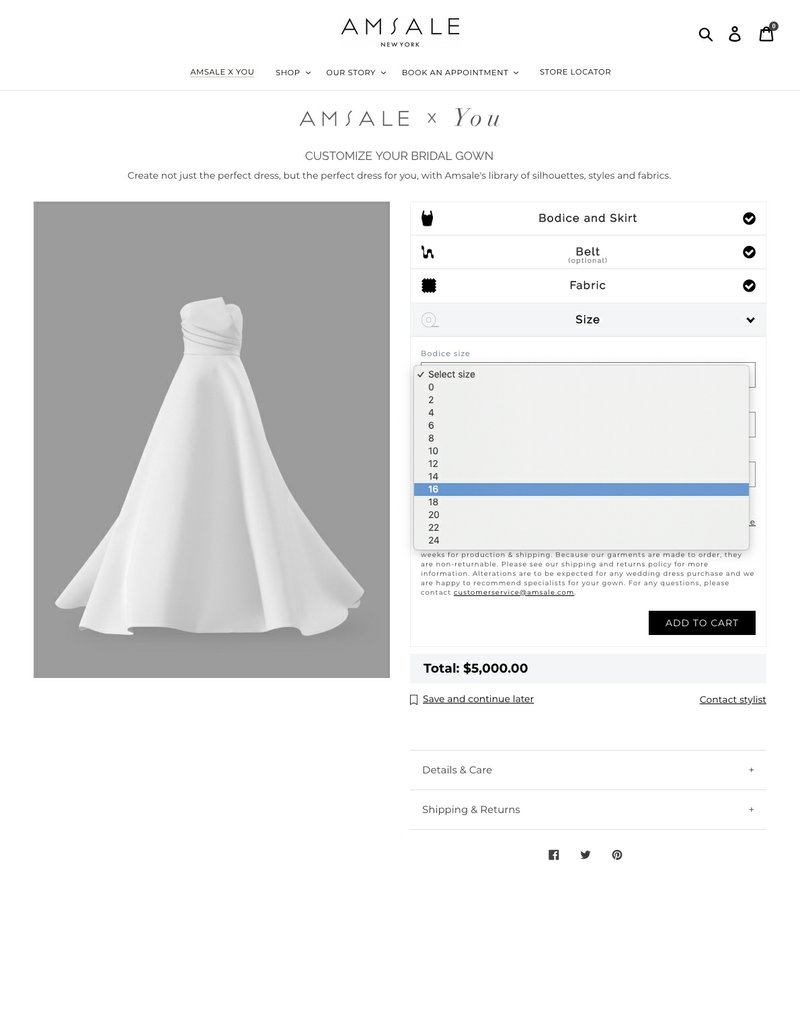 Sizes range from 0 to 24. MUST CREDIT: Amsale

NEW YORK -- The bridal wear designer Amsale Aberra was among the first to give women a sleek, restrained alternative to a wedding dress as a sugary confection.

Last year, Aberra died of uterine cancer. The 64-year-old left behind her daughter Rachel, a handpicked design team, and her husband and business partner, Neil Brown, who together are aiming to carry on Aberra's creative legacy. But even more ambitiously, they are looking to upend the entire bridal wear industry, which typically measures innovation by gradations of off-white and ivory to blush.

Brown wants to change the way brides buy wedding gowns, transforming the enterprise from a Say Yes to the Dress field trip -- in which it takes a village to choose between an Empire waist or a trumpet hem -- into a luxury online experience.

"I see the company transitioning from a fashion company to a fashion technology company," Brown said one afternoon last fall.

Gathered around a conference table in the brand's headquarters in New York's Garment District, he and the Amsale team were explaining their next steps. One wall was covered in a hodgepodge of sticky notes, each one marked with a nugget from a brainstorming session about what brides want and when they want it. Brown, with the help of business and technology consultants, was considering how best to move forward in a time of e-commerce, customer impatience, an emphasis on personalized experiences and the ominous reality that David's Bridal -- the country's largest bridal gown retailer -- had filed for Chapter 11 bankruptcy protection, from which it has since emerged.

"So many in this industry see technology as a support function for what we do, but it's really a place of creativity that's complementary to what we do," Brown said.

Several months later -- after layoffs and the launch of Amsale e-commerce, which Brown said has helped the business grow rapidly -- the company is debuting Amsale x You.

Shoppers can go online and design their own wedding dresses -- within the tasteful confines of the Amsale aesthetic. "We're not just decorating a sneaker," Brown said during a recent demonstration of the site. "We're inviting the bride into our design room and sharing our intellectual property with her so she can express her own design impulses."

A bride can select her dress's bodice and skirt and add a wisp of a belt. She can pick from size 0 to 24, mixing and matching different-size tops and bottoms for an optimum fit. It won't matter if a customer chooses tulle or silk faille, long sleeves or strapless -- the cost is a flat fee of $5,000, which counts as a bargain in Designerville, since custom gowns ordered through Amsale's Madison Avenue salon would start at $10,000. The dress is made-to-order and shipped out in four weeks.

It all sounds wildly efficient and stress free -- except for that part about imagining what the dress will look like in real life, worrying that the dress won't be as flattering as you thought or coming to grips with the reality that contrary to what you have firmly believed since, well, forever -- you actually hate tulle. What on earth possessed you to buy a custom tulle wedding dress that night you were sitting at home alone with a glass of wine and your wildest fantasies? What were you thinking?

In other words: The proposition has a few hurdles.

Eventually shoppers will be able to create a personalized avatar with their exact measurements. More bodices and skirts from the company's vast pattern archive will be added for even more dress possibilities -- but really, even today, while silhouettes and beading may vary, it's still all about a traditional white dress.

Some stats: According to the American Wedding Survey by Brides magazine, 83% of brides in 2018 chose a dress that was white or off-white and 76% wore a veil. The survey also noted that 66% of brides shop for their dress in specialty salons and they spend an average of $2,260.

Brown said that about 25% of brides were responsible for about 75% of wedding spending and the Amsale customer is firmly within that category. He figures, if shoppers are willing to go to websites such as Net-a-Porter, Mytheresa and Matches and spend $4,000 and $5,000 on designer dresses, surely they will be willing to do the same for their wedding. Perhaps. Probably.

Amsale would not be the first to offer custom-made gowns online, but it would be at the top of the price range and offer a singular design point of view. At the website Anomalie, a team of designers helps shoppers through a months-long process that offers wide aesthetic latitude and a liberal return policy, and the site advertises that most dresses cost $1,000 to $1,500. Others offering such services include Bluethread and a host of Etsy entrepreneurs.

But a wedding dress is not a gala gown or a cocktail frock. It's a singularly symbolic garment that speaks of girl squads and multigenerational bonding. The dress sets the tone of the wedding as much as the location and even more than the flowers, the cake, the everything else. The bride-in-the-dress serves as the day's big revelation, the moment of anticipation, the embodiment of overflowing emotion.

Shopping for the dress is a social outing that includes the bride, her mother, her friends and anyone else she considers part of her inner circle -- or simply in possession of good taste. The dress is not a solo event; it's a shared experience -- fraught and celebratory. It's an adventure to be documented on Instagram.

Thus, Brown doesn't just want to change the way Amsale dresses are sold; he wants to change the cultural perception of the wedding dress itself, which is akin to changing the way in which brides -- and women -- see themselves individually and in relation to one another. That point of view has remained stubbornly static over the years: Have you picked out your dress? What are you going to wear? Let's discuss.

The seed for the Amsale brand was planted more than 30 years ago. Aberra, a graduate of the Fashion Institute of Technology, sketched her own wedding dress in 1985 as a matter of necessity. The kind of restrained, sophisticated gown she wanted didn't readily exist; wedding dresses had a fairy-tale princess complex. Aberra's dress, elegant with a chiffon bodice, was the foundation on which she and Brown built their company, and its aesthetic signified a shift in thinking: A woman did not have to redefine herself just because she was a bride. Instead, her dress could reflect the woman she had always been.

Amsale gowns, at their best, exude special-occasion joyfulness but with a grown-up, refined air. They are crafted with strong lines and judicious embellishments, rather than an over-abundance of ruffles, crystals and beading. They are the equivalent of a perfectly calibrated martini rather than sweet cocktails.

Amsale opened the door for brands such as Vera Wang and Monique L'Huillier. Their designers ultimately eclipsed Aberra in name recognition thanks to their ready-to-wear collections, which regularly appeared on the red carpet.

Can the company lead another shift?

Today, brides have an endless supply of Pinterest design inspiration. Finding a dress -- or a jumpsuit or a suit -- that reflects their personality is not the high hurdle it once was. The challenge is doing so conveniently, at a reasonable price and in a multitude of sizes.

According to WeddingWire.com, 80% of wedding planning is done online and 35% of millennials are planning wedding attire online before they even get engaged. And plenty of women skip the designated bridal gowns and simply buy a great party dress with the click of a button because they're more excited about their destination wedding (1 in 4 count as such) than Swarovski crystals on silk organza.

There are plans for Amsale x You to include an option for an online group shopping experience -- a kind of e-commerce meets Google Docs meets FaceTime. But a virtual gaggle is not quite the same as giving a bunch of sample dresses a real-life spin in front of an audience of besties sipping champagne.

That's not necessarily bad. Many brides might prefer it. They may have been dreading the tradition of dress shopping by committee.

Just as it was something of a revolution when women shunned the wedding gown frippery, it may be a 21st century revolution to declare one's shopping independence. To refuse the group think and the solicitous sales representative. Solitary contemplation in front of a laptop can be its own special joy.