Greenbrier teacher receives state Above and Beyond award 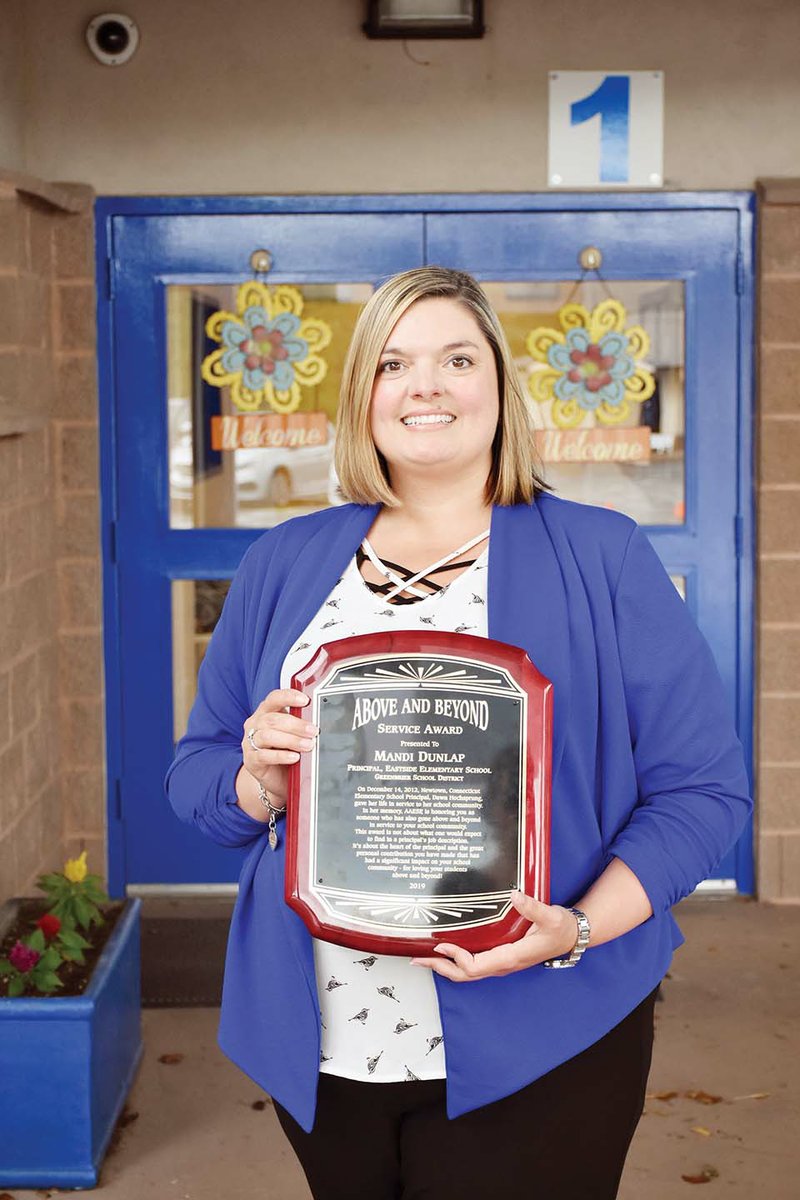 Mandi Dunlap, principal of Eastside Elementary School in the Greenbrier School District, holds her Above and Beyond award from the Arkansas Association of Elementary School Principals in conjunction with the national association. The award was named in honor of Dawn Hochsprung, the principal at Sandy Hook Elementary School, who was killed in 2012 during a school shooting in Newtown, Connecticut.

Still, Dunlap’s supporters say she has devoted her life to children.

Dunlap received the Above and Beyond Award from the Arkansas Association of Elementary School Principals in conjunction with the national association. It was named in honor of Dawn Hochsprung, the principal at Sandy Hook Elementary School, who was killed in 2012 during a school shooting in Newtown, Connecticut, after confronting the shooter in the hallway, according to news reports.

“I don’t think in any way do I hold a candle to that; that was a true hero right there,” Dunlap said. “Just to know there’s a special award to honor principals out there and the work they’re doing — that’s a true honor.”

Dunlap was nominated by the teachers in her school in Greenbrier, who highlighted her work to feed students in need during the summer and more endeavors.

A social-worker-turned-teacher, Dunlap is starting her third year as principal at Eastside Elementary.

After she graduated from South Side Bee Branch High School, she went to Central Baptist College in Conway and earned an associate degree before graduating from the University of Central Arkansas in Conway with a sociology degree. She worked for Counseling Associates in Morrilton, offering mental-health resources for students.

“That whole job was about going into the schools and connecting with the kids in the school system. … It was there I realized I wanted to make a bigger difference. I could make an impact with those kids, but I wanted more of that on a larger scale,” Dunlap said.

She went back to school to earn a master’s degree from UCA and an educational specialist’s degree at Arkansas State University in Jonesboro.

Her first teaching job was in fourth grade at South Side Bee Branch. The other fourth-grade teacher had been Dunlap’s teacher when she was a student at the school.

“I loved it. The other fourth-grade teacher was my fourth-grade teacher at South Side when I was going there. She (Sara Haley) gave back and invested in me and saw what things I could accomplish,” Dunlap said. “It was only one year, but that was a monumental milestone, working with Sara Haley.”

Dunlap moved on to a job in Greenbrier, where her husband, Josh, grew up. She taught sixth-grade math for 10 years at Greenbrier Middle School and loved it, she said. Then she got that itch.

“I had about done everything I could with sixth-grade math after 10 years,” she said.

She was hired as assistant principal at Wooster Elementary School in the Greenbrier School District, where she stayed two years before getting the principal’s job at Eastside Elementary.

“Once again, I felt that urge to kind of make a bigger difference. … That was kind of the pull there,” she said.

Dunlap has been integral in school-district programs from the beginning of her tenure.

She started a summer food drive as an assistant principal in Wooster that she has continued at Eastside Elementary. At Eastside, 54 percent of its students receive free or reduced-price lunches, she said.

“That’s going on every week at Eastside, even though the teachers aren’t getting paid. We have teachers who volunteer to come up and deliver food to about 15 families once a week in the summer,” she said. “That’s probably the most influential thing [we’ve done]. For those 15 families, we’re a lifeline for them.”

Dunlap suggested giving out books to the children, too.

“And I thought, ‘Well, if we’re in the homes giving out food, we can give them some books,’” Dunlap said.

She started the Library on Wheels, and books are given out with the food. The children don’t have to return the books.

Dunlap sometimes goes to the homes to make deliveries, too.

Her favorite memories are “seeing the kids in their home environment, and some of them live in some rough places, but their little faces light up when they see us. We’re familiar faces and a safety zone,” she said.

“One thing I continue to think about — it’s hard to get parents to let go of their pride and say, ‘Yeah, we need help,’” Dunlap said. “I want to continue to reach out to parents and be part of their lives. What about the other families who aren’t part of the 15? … How are they doing?”

Dunlap also implemented the Read As One program.

“I wanted more books in the hands of kids at home,” she said.

“We as a whole staff, kids and

parents are reading the same book. Each week, they read certain chapters, and we do a celebration at the end. That’s been pretty cool to pass on that love of reading to the kids,” Dunlap said.

They wrote in the nomination: “Because she never settles for average or the status quo, Mrs. Dunlap added yet another layer of support for her school community in this year’s Read As One, by using social media to improve the program, specifically Facebook Live, to read for many shareholders from her own home with her own children.”

The staff further wrote, “With Mrs. Dunlap’s leaderships skills and her innovative ideas, she has made Eastside Elementary a driving force in the district. We, as teachers, consider ourselves lucky — lucky because we have a strong leader who supports and challenges us every day to be better for ourselves and for our students.”

They included specifics of Dunlap’s many projects, including her work to create a team to revive the school garden: “The Very Important Panther after-school program allowed for those at-risk students to help plant and tend to the garden. This impacted her staff to the point that many volunteered over the summer to maintain the garden. Her efforts allowed for fresh produce to be sent home with students and for parents to come pick from the garden as well. This unique service to the students and parents pushed her creativity in service even further. She established a new partnership with the University of Arkansas Extension Office, Ferguson Flowers, the Master Gardeners organization and Whit Davis Lumber Co. to spread the impact of gardening to her school community.”

She said the Greenbrier community often partners with the school, including Crosspoint Baptist Church, which is “right down the road from us.” The church helps supply the school’s food pantry, and members volunteer on family nights, help with coats for kids and more, she said.

Dunlap said that while she is appreciative of the Above and Beyond award, she knows other educators are deserving of it as well.