Scraps of life: 'Eviction Quilts by James Matthews' shows what is left behind, lost when families are evicted 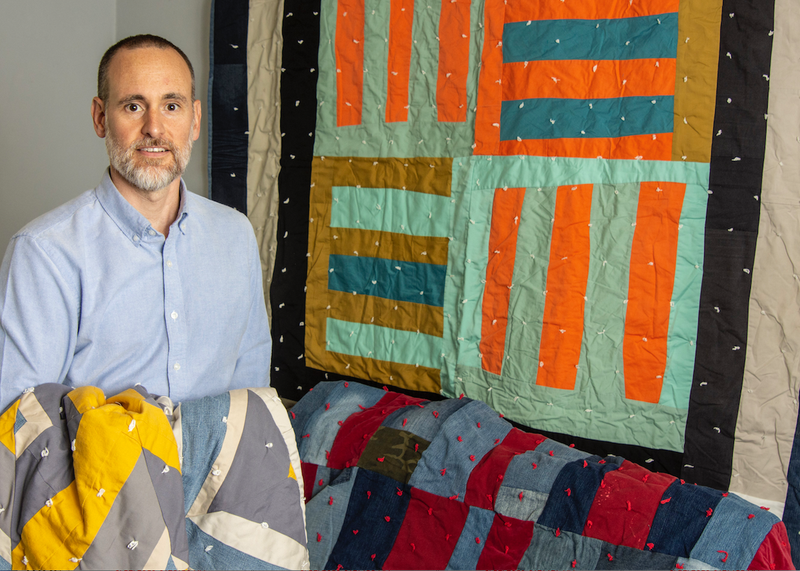 James Matthews stands in front of one of his quilts in his Stifft Station home. An exhibition of Matthews’ quilts — “Eviction Quilts by James Matthews” — has opened at the Arts & Science Center for Southeast Arkansas in Pine Bluff. (Arkansas Democrat-Gazette/CARY JENKINS)

James Matthews has been walking and biking around Little Rock for about a decade, getting to know the city as he documents and photographs houses of worship and leads urban walks, among other projects.

As he was exploring neighborhoods, Matthews, 43, a documentary artist, began to notice piles of clothing and furniture on the curbs in front of some houses.

"I asked neighbors what they knew about the family and what had happened," he says. "[Sometimes] neighbors did confirm that it was an eviction; one time a person who worked for the landlord or owner was at the home and talked to me about the eviction."

[RELATED: Artist digs his own clay to tell history of the city]

Why those items were there and the story they told began to sink in as he saw more and more of the tell-tale signs of eviction.

"It's the totality of the loss. Everything a family owns, from clothing to toys to furniture to family treasures, is piled at the side of the road; it is a family's entire life. I've found family photo albums that go back for generations.

"As a parent, it is especially hard to come across an eviction when you see that a child was part of it."

He wanted to bring the experience to people who normally wouldn't notice an eviction and so wouldn't face what he sees as a growing social concern that especially affects women and children.

"I tried to photograph the aftermath of evictions, but it felt cold and distant."

In 2015, he had an idea: Matthews picked up clothing and items at an eviction site, after finding out when the trash trucks ran and waiting until the last minute before picking up the material. 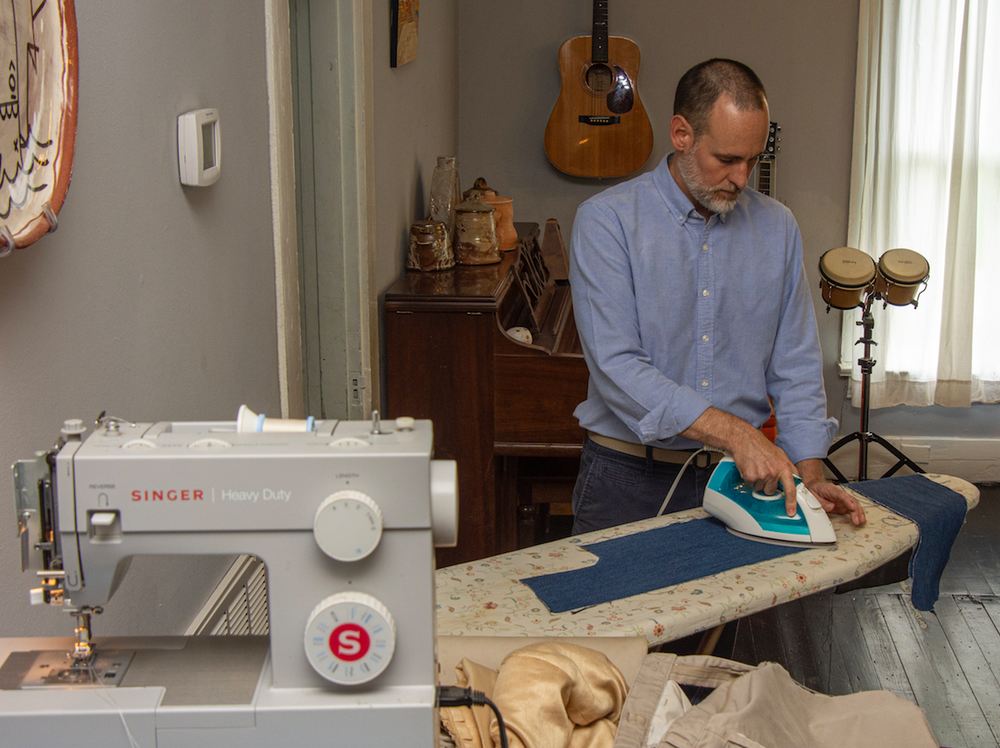 James Matthews irons cloth for use in his quilts. (Arkansas Democrat-Gazette/CARY JENKINS)

"I was hoping the families would come back for their things."

He washed the clothing and cleaned some of the items and set up an installation at the Sixth Street Library, a gallery/collaborative space he co-founded with Scott Walters, then rector at Christ Episcopal Church in downtown Little Rock.

"There was a plate, some stuffed animals, a girl's Justin Bieber backpack with schoolbooks in it, a diary written to Justin Bieber, clothing from each of the four members of the family. People could relate to clothing similar to what you might wear; it humanizes these objects and the eviction."

He looked at the leftover clothing and bedding and had another idea.

"I decided to make a quilt and hang it in the gallery." More would come.

In 2017 and 2018, he entered the Arkansas Arts Center's "Annual Delta Exhibition," winning an honorable mention in 2018. He is one of the artists featured in the arts center's Delta 60 documentary.

Now people can see that first quilt and the other eight in the eviction series, thanks to the Arts & Science Center for Southeast Arkansas. "Eviction Quilts by James Matthews" hangs through Sept. 28.

Lenore Shoults, curator at the Arts & Science Center, became aware of Matthews' work when a postcard showing one of the quilts arrived on her desk. She had recently read a book on evictions, Matthew Desmond's Evicted: Poverty and Profit in the American City.

"It was in my consciousness that evictions are a social issue when I received James' card."

She called Matthews and arranged a meeting.

"I knew that if the quilts were what I thought and hoped they were, I definitely wanted an exhibition."

Shoults said the quilts were "phenomenal, especially if you have an awareness of this issue. It was an artistic way of interacting and talking about evictions."

Matthews sits in the neat and comfortable front room of the Stifft Station neighborhood home he shares with his wife, Patricia, a priest at St. Mark's Episcopal Church, and their three children. The room does double-duty as his art studio. Hanging on the soft gray wall behind the couch is one of his quilts; its bold colors and pattern radiate a real beauty that belies the source material's sad origins.

Also hanging on the walls are three guitars (he doesn't play music; his wife and children do). Near the front door, some small works by the artist Sulac enliven the room. A whimsical ceramic platter by Little Rock potter Beth Lambert in collaboration with street artist Woozel hangs above a wooden table that also serves as his sewing machine table. An upright piano at a corner across the room displays some of Matthews' pottery.

At his day job, Matthews, a native of Yazoo City, Miss., is director of communications for the Episcopal Diocese of Arkansas, tending to the diocese's photographic needs, its website, social media and other duties. Before joining the diocese about eight years ago, he was an editor and writer at Heifer International. 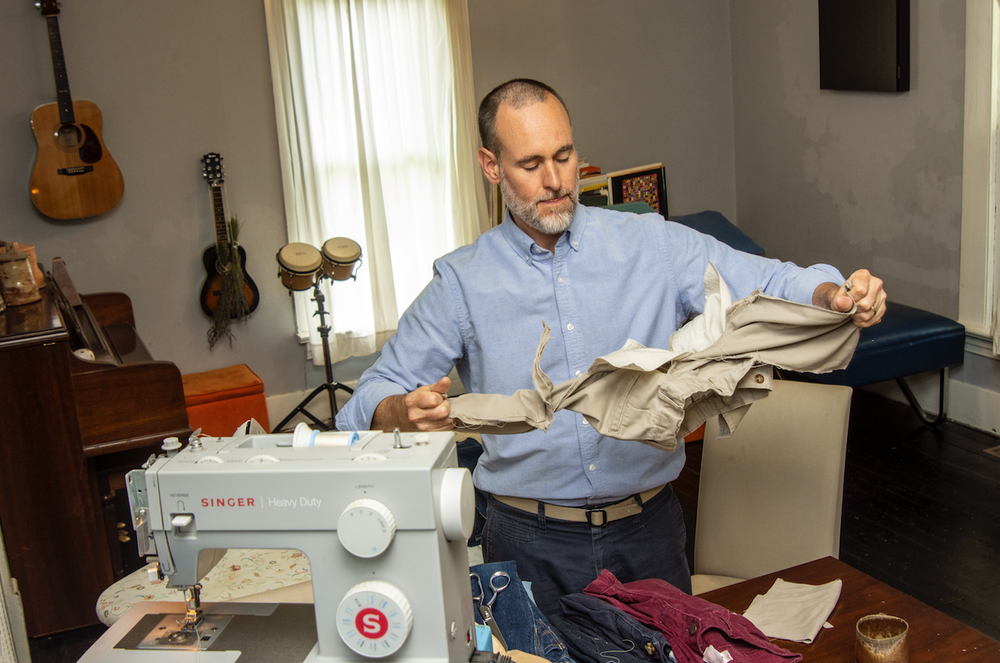 James Matthews prepares clothing for use in his quilts. Matthews’ exhibition at the Arts & Science Center for Southeast Arkansas in Pine Bluff continues through Sept. 28. (Arkansas Democrat-Gazette/CARY JENKINS)

But in his studio, sitting in a chair near an ironing board, Matthews is the documentary artist at work. He rips the leg seam of a pair of freshly laundered men's jeans, placing the strips of denim on a growing pile. After he irons them, the panels will be added to one of the stacks on the sewing table. The fabric stacks are organized by color and, sometimes, the type of fabric.

"The design of the quilt comes later in the process after I see what I have," he says.

Matthews learned to sew eight years ago to make things for his daughter.

People assume, he says, that his grandmother was a quilter.

"Nobody in my family I know of made quilts; we didn't have any family quilts that were passed down. The only quilts I remember were the ones my grandmother kept in the trunk of her car. She would dig up wildflowers to transplant in her garden and the quilts kept her trunk from getting dirty."

But "I studied folklore at the University of North Carolina and traditional quilting patterns, the simpler, strip-type quilts, log cabin style. That prepared me well for this project."

As he rips seams, then irons, he talks about documentary art and what it means.

"I have a certificate in documentary photography from Duke University," Matthews says. "I did that until everything became digital. So I started looking for other outlets for this impulse to be in the world -- it's faith-based for me, I think -- to be in a landscape, to see what's going on there and then communicate it to people in some way. To me, that is the documentary impulse, to see the world in a particular way and help others see that as well, whether it's film, video or any other media. Quilts for me serve a similar purpose."

They communicate a lot of meaning.

"Quilts speak of home, stability, history, traditional, passing things down. These eviction quilts are about the loss of those things."

Matthews says using clothes and bedding from an eviction to make a quilt puts it into an archive of sorts for the future.

"I thought the evictions were an important story to tell about Little Rock," Matthews says.

"You are never far away from that idea that this material represents real lives and real losses for these people. You never want to lose sight of that. The material has been transformed into something that hopefully is looked upon as beautiful. It holds within it a tension: This beauty comes from tragedy. The signage with the quilt tells how it's made, its source. The quilt is not complete without this knowledge, that it came from tragedy."

Matthews titles the quilts after the name of the street where the material was found.

Shoults says Matthews has recognized eviction is an invisible problem and made it visible.

Seeing the quilts, she says is "painful," but she praises Matthews for being "so respectful ... making something beautiful and raising awareness."

The Pine Bluff show marks a possible ending and a new beginning for Matthews.

"I often have said I'm done with this project, then I find out I'm not quite done yet. I think most people assume there is a political bent to this project, that it is the driving force. I understand that, but that was not the intent to begin with. That would have made this propaganda.

"For me it was the documentary impulse. Evictions are happening all around us and many of us are unaware. It's sad and many times angering to see how prevalent this is in our city. Arkansas is a poor state, racially divided, and there are laws that exacerbate the eviction problem."

He hasn't sold any of the quilts. He's not sure he will.

"I wouldn't want to be seen as profiting from someone else's tragedy. As an artist, I want to control some of the context in which they are seen. Without the knowledge the quilt came from an eviction, it loses most of the point. Divorced from the origin of the material itself, it loses its real purpose." 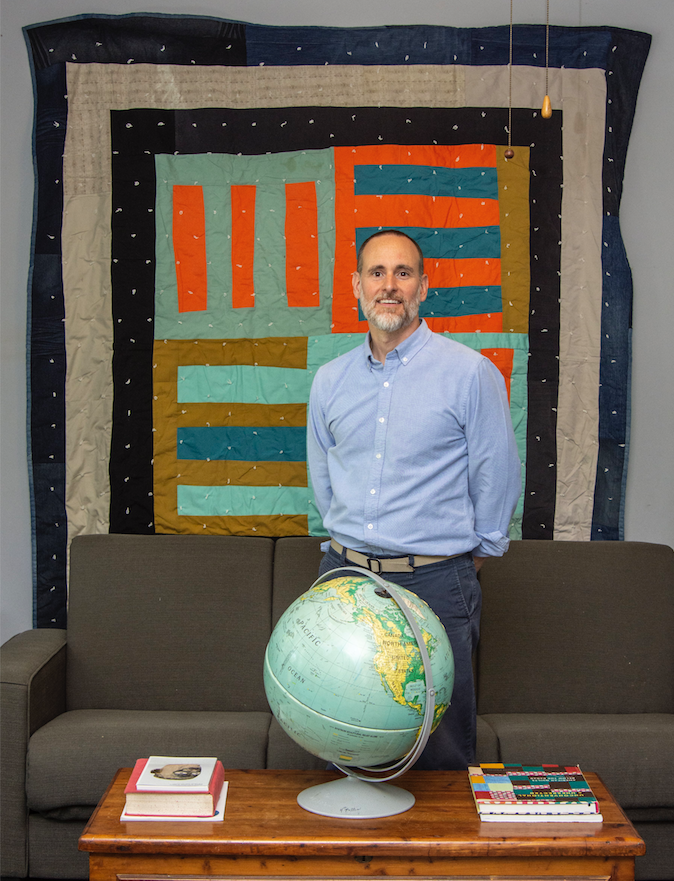 "I don't know," Matthews says. "It's a strange place to be, having working so long on these quilts. I feel I'm done with the project, but the quilts are new to other people because this is the first time they've all been exhibited. Maybe when the show is up and open then I'll be able to look forward. This is a sort of in-between time when I want to be looking forward but I have to look backward for a while.

"Part of the reason to make these quilts was to hopefully engage in a larger conversation about the city, about the evictions going on around us," Matthews says. "Making a quilt of it and hanging it in a gallery, allows a certain kind of conversation to start. What I would hope is that the gallery crowd and the people most affected by eviction would be able to share that space, to both be part of the conversation."

Print Headline: Scraps of life: Exhibition shows what is left behind, lost when families are evicted