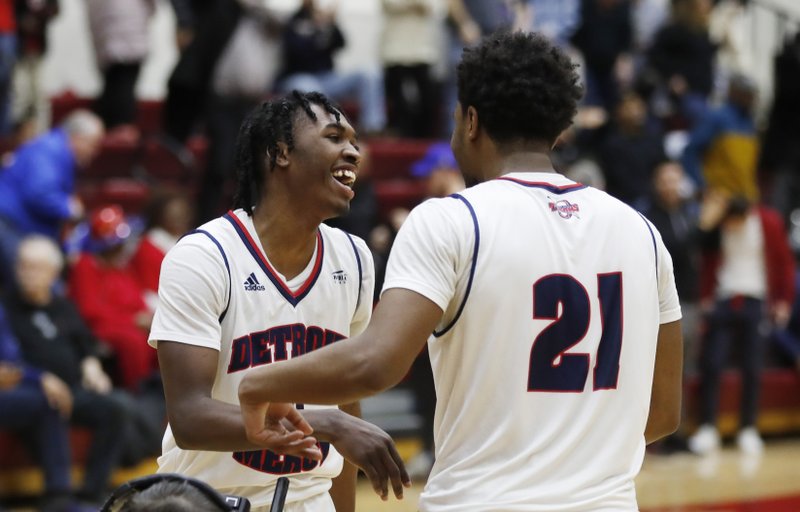 Detroit Mercy guards Antoine Davis, left, and Lamar Hamrick (21) greet each other after the team's 87-85 win over IUPUI in an NCAA college basketball game, Thursday, Feb. 28, 2019, in Detroit. Davis broke Stephen Curry's freshman 3-point record early in the second half and finished with 20 points. Davis swished a 30-footer from the right wing for shot No. 123 beyond the arc to surpass the mark Curry set at Davidson 12 years ago. (AP Photo/Carlos Osorio)

DETROIT -- Antoine Davis dribbled slowly past midcourt, went toward the right sideline and created space from the defender with a jab step to the right before putting the ball between his legs to his left and stepping back for a 30-foot shot.

The Detroit Mercy guard broke Stephen Curry's freshman three-point record with the high-arcing shot from deep on the right wing early in the second half of an 87-85 victory over IUPUI on Thursday night.

"I couldn't help but smile," Davis said at a postgame news conference. "I was trying to keep my composure with the crowd clapping and the standing ovation.

"The feeling is unreal."

The no-doubt shot was No. 123 beyond the arc this season, surpassing the mark Curry set at Davidson 12 years ago.

"I've heard about him, yeah," said Curry, who wasn't aware earlier this week he was still holding the Division I record for three-pointers made by a freshman. "Records are meant to be broken, for sure."

Davis' feat was celebrated briefly in front of just 1,786 witnesses at Calihan Hall, where the public-address announcer informed the crowd that history was made while a graphic was shown on the video boards to recognize Curry's record was broken.

"I was nervous for him the last two weeks," said Titans Coach Mike Davis, sitting alongside his son at the postgame news conference.

The 6-foot-1 guard matched Curry's mark with a 3-pointer in the first half.

Davis finished 7 of 20 from the field, 4 of 12 on three-pointers and had 6 assists, including one to set up Josh McFolley's go-ahead three-pointer with 45.5 seconds

McFolley scored 25 points for the Titans (11-18, 8-9 Horizon League) who will have to win their conference tournament championship in Detroit to make the NCAA Tournament with a team Davis scrambled to put together after he was hired last summer.

The former Indiana coach, who led the Hoosiers to the 2002 Final Four, did not have to use one of his scholarships for his son because his father-in-law had a college fund set up for him.

"If you don't use it for college, you get taxed," he said.

Mike Davis said college coaches expected him to coach his son at Texas Southern, cooling interest in him as a three-star prospect. The Cougars, Arkansas-Little Rock, Stephen F. Austin, Nevada and others showed interest in him, according to Antoine Davis. His father said Cal State Bakersfield, UTEP and Colorado State also showed interest.

No one saw this coming.

Davis is averaging 26 points with teams face-guarding him without the ball and double-teaming him with it. He has made a freshman-record 125 three-pointers on 324 attempts, connecting on 39 percent. And he's playing 37-plus minutes per game.

"He has trained hard over the last four or five years for this moment," his father said.

Antoine Davis was home-schooled from the seventh grade through high school and his father set him up with former NBA coach and player John Lucas to work on his game in Houston.

"I trained three or four times a day," Antoine Davis said. "I took Sundays off and sometimes Saturdays, too. It prepared me to fight through fatigue and got my mind a lot stronger."

The hard work has paid off, putting him in the same breath this week with one of the game's greats.

"It's an honor to be in mentioned in same sentence as Stephen Curry," he said. "But I still have a lot to learn." 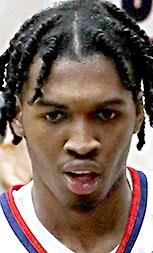