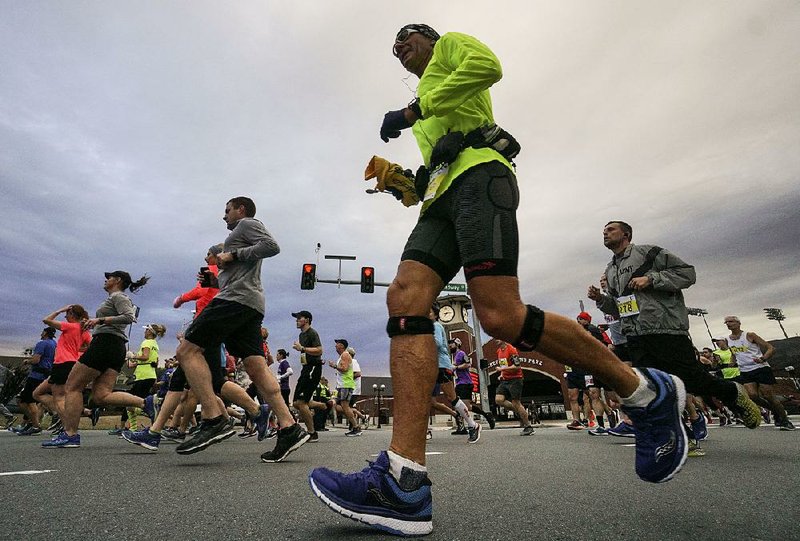 The challenge of marathons begins months before the race starts.

Acts of day-to-day life throw hurdles in everyone's way, but a handful of others have overcome challenges so great they make the marathon's distance of 26 miles, 385 yards seem no more than the next step.

The Little Rock Marathon begins Sunday with scheduled starts of 6 a.m. and 8 a.m. for runners and walkers, and 7:55 a.m. for wheelchair and hand-cycle racers. A total of more than 10,000 participants are expected for the marathon weekend, scheduled to begin today with 5K and 10K races and the final mile of the Little Rockers Kids Marathon. Half-marathon starters will join the Sunday crowd in downtown Little Rock.

Orndorff, a 28-year-old University of the Ozarks professor from Clarksville, has stared down cerebral palsy since his early days in High View, W.Va. 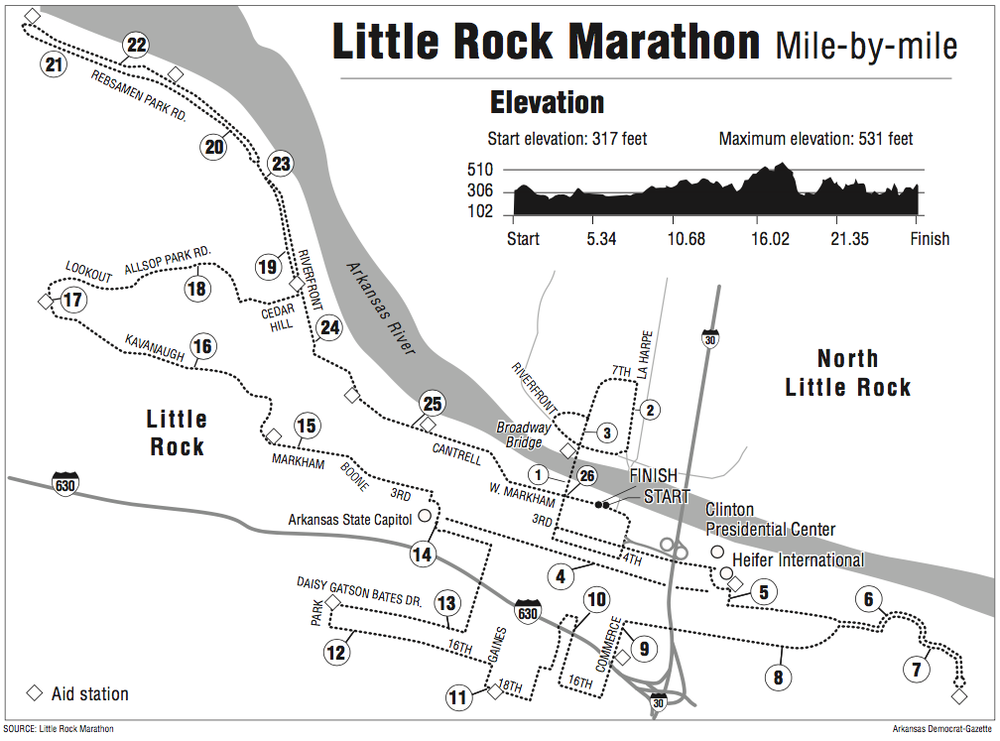 Raney, 52, of Paris, Texas, fell from an ATV near Lake Greason in southwest Arkansas in the winter of 2006. Her helmet-less head was so damaged that she had to relearn nearly everything, including how to walk.

VanDeraa, a 41-year-old paramedic from Vinita, Okla., was shot twice in the back of her head more than 13 months ago in an attempted murder-suicide. Her wounds kept her from fulfilling a commitment to run last year's Little Rock Marathon, so she deferred her registration to Sunday's race.

VanDeraa was shot by a co-worker on the night of Jan. 23, 2018. Her efforts and those from others were inadequate to relieve the shooter's acute symptoms of post-traumatic stress disorder, VanDeraa said.

After he fired the first of two shots from a .22-caliber pistol through the back of her skull, she knew her life hung on matters beyond her control. He then fired again. Her memories spread over a range of injury and anguish. However, details of her thoughts from shortly thereafter remain clear.

Within days, VanDeraa's thoughts returned to running. She knew the 2018 Little Rock Marathon was beyond her reach, but there was a 5K she wanted to attempt less than a month after she was shot.

"I used my walker," VanDeraa said. "My doctor told me I could try it, but he was a little worried."

A year later, she hopes to finish the Little Rock Marathon.

"I can't run, and I still use a walker, but I definitely want to finish," VanDeraa said.

Raney's recovery was more prolonged, though she said it began with months of rehabilitation in Hot Springs.

"I couldn't remember how to do anything," Raney said. "People had to bathe me, but I finally got to the point that I said, 'I'm going to be strong. I'm going to build myself back up.' "

Raney said she had to relearn life's most basic tasks. The idea of walking and running seemed distant, but she was willing to wait. Ever so gradually, she retaught herself the routine of placing one foot in front of the other. Balance began to return. Using a walker, she began to walk streets in her neighborhood. Finally, in 2015, she entered a 5K and completed it in nearly two hours, she said.

"I thought I was giving it everything I had, and everyone else was walking right by me," she said.

Finally, Raney said, the time had come to try a marathon, and with the encouragement of her friends from the Paris Road Runners, she registered for the Little Rock Marathon.

"Everyone of them signed up to do this race with me," Raney said.

Running and walking were never easy for Orndorff. As a 2-year-old, he was diagnosed with cerebral palsy, a chronic condition with nearly universal and irreversible symptoms of stiff, weak muscles, and compromised coordination.

Successful long-distance running requires persistence and discipline for anyone. The importance of those traits is redoubled for runners with cerebral palsy.

"Basically on my right-hand side, I have trouble with movement sometimes," Orndorff said. "When I started, my coordination was horrible, but my coaches helped me try to figure out how to move my arms correctly and keep my head still."

Orndorff ran on the West Virginia Tech cross country team as a college undergraduate. He kept running through graduate school as he earned degrees at Louisiana Tech in Ruston.

In the Little Rock half-marathon, he hopes to run the fastest known time by a person with cerebral palsy. Justin Gallegos, of Santa Clarita, Calif., currently holds the record of 2:03:49. Orndorff said he has a primary goal of a sub-two-hour finish.

"I just want to go as fast as I can, but I believe that I could break that two-hour barrier," he said.

Regardless of time, finishing is a priority for Raney, VanDeraa and Orndorff.

"I was born with an extreme mule head," Raney said. "I got that from my daddy. Now, I'm still very slow, but I can do it. My mindset is, it can beat me or I can beat it. I'm not worried about time, but I'm determined to finish no matter how long it takes."