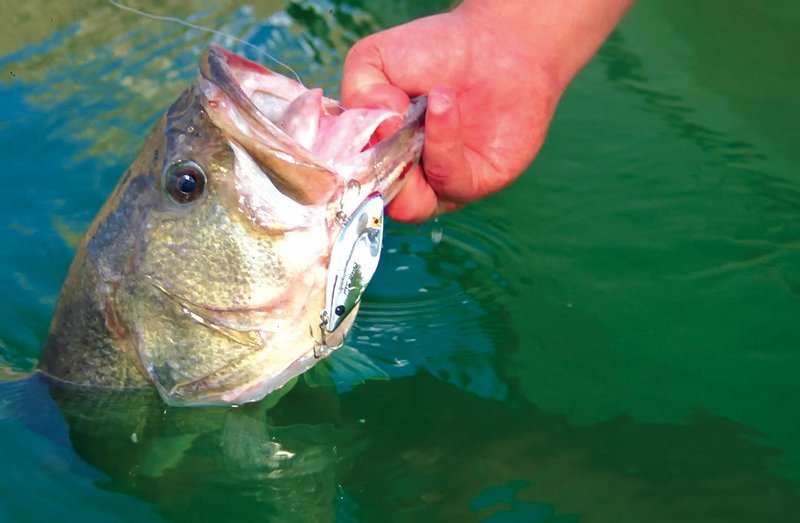 Vibrating plugs like the Cordell Spot can be vertically jigged around deep structure to entice cagey cold-water largemouths.

Many anglers fail to recognize it, but the last few weeks of winter can serve up some of the year’s best largemouth bass fishing. You’ll have to be able to tolerate the extreme cold, wind, rain and snow that can be part of fishing this time of year. But if you can, you’ll find that late February and early March provide excellent opportunities for hooking trophy-class largemouths.

This time of year, we often experience a false spring in Arkansas, with several days of warm, sunny weather that hint at spring’s arrival and more days of fast-paced spawning-season bass fishing just ahead. These periods of sunshine and unseasonable warmth stir angler desires temporarily snuffed by winter’s bitter cold, and during those blue-sky bluebird days, an epidemic of spring fever runs rampant through The Natural State’s angling fraternity.

Unfortunately, many fishing trips this time of year end with few or no bass being caught. That’s mainly because cold-weather anglers insist on using spawning-season bass tactics, and those tactics rarely entice prespawn bass. To enjoy success, we need to learn strategies that will entice tight-lipped largemouths still haunting deep waters, tactics like those outlined in the following paragraphs.

Successful late-winter bass anglers learn how largemouths react to changing weather patterns this time of year. The temperature can be 70 degrees one day and 20 the next. There might be snow and ice on the trees or warm rains that bring out flowers and frogs. These ups and downs cause bass to migrate from shallow water to deep and back again several times before they’re ready to begin spawning activities.

The best bassing times tend to be near the end of warm spells that last several days. Male bass will often move to the shallows to start fanning out their nests then, and females bulging with eggs follow closely behind. To catch these fish, concentrate your attention on shallow waters with firm bottom where you know spawning will occur in upcoming weeks.

Each time a significant cold front passes through, these shallow bass will return to the shelter of deeper water. Anglers should follow, casting lures to humps, drop-offs and other distinct forms of bottom structure, where light penetration is minimal and winter cover—brush piles, stumps, treetops, etc.—is abundant.

Days tend to be sunny and breezy when cold fronts arrive, and because waves produced by the wind reduce light penetration, bass will frequently stay near mid-depth structures during this time. Three to five days following a cold front’s arrival, winds cease or become moderate, allowing greater light penetration and driving light-sensitive bass to deeper structure and cover.

If the sun continues shining and the temperature rises again before the passage of another cold front, bass will gradually migrate back to the shallows again. Warm rain hastens the exodus, sending fish scurrying quickly to shallow reaches.

Consider all these factors when selecting areas in which to focus your late-winter fishing efforts.

The beds of dense green aquatic vegetation commonly seen in summer are hard to find in late winter. In fact, all plant growth, including the microscopic phytoplankton that clouds the water during warm months, is at a minimum. Lake and river waters tend to be extremely clear because of this, and the absence of dark-colored tannins produced by decaying leaves clears most fishing waters even more.

Savvy fishermen know they must match their lures to the available food sources for bass, regardless of the season. During late winter, that often means selecting lures that resemble crayfish or flashing, silver-sided baitfish. Bass gorge on crayfish year-round in waters where they are available, and baitfish such as minnows, shad and silversides are major prespawn prey items in many waters.

Crayfish imitations such as crayfish-pattern crankbaits and the jig-and-pig are extremely effective early-season bass catchers. Work them across the bottom with a jerk-stop action that mimics a crayfish’s natural locomotion. Good baitfish imitations include spoons, spinnerbaits, large grubs and silver crankbaits.

Vertical jigging using grubs, spoons and vibrating plugs such as the Cordell Spot and Bill Lewis Rat-L-Trap can be a very productive late-winter tactic. It’s especially effective for bass lurking near channel drops and deep structure.

Fish the lure right beside your boat, using a subtle lift-drop motion. Don’t work the lure with a 2-foot upward pull like you might in summer. Use a shorter upward motion instead, twitching the rod tip vertically, then letting the lure flutter back down on a tight line so bites won’t be missed.

Strikes usually come as the lure falls, and the first sign that a bass is on may be mistaken for a hang-up. Watch your line constantly for little jumps or twitches. Such movements indicate a bass has grabbed the lure as it fell.

Early-season bass usually form loose schools, so when you find one, others could be nearby. For this reason, it’s important to work your lure in, around, over, under and through each piece of cover where you think bass might be hiding. Your retrieve should be slow, yet erratic, to entice fish to strike. Early-season bass still move very slowly as a result of the cold.

One of my friends once caught 10 bass from one sunken treetop on an overcast,

breezy February day. Each fish weighed more than 5 pounds. This time of year, bass tend to run larger on average than bass caught during other periods. In fact, some of the biggest bass you’ll catch in 2019 are likely to be landed just prior to the spring spawning season.

To catch these lunkers, you’ll have to know how bass behave and where they are likely to be when weather patterns and water quality change. You’ll need to use the proper lures, tackle and fishing techniques. Most importantly, though, you’ll have to just get out on the water and fish. Having the tenacity to tough it out when weather conditions are uncomfortable is the most important key to successful late-winter bass fishing.