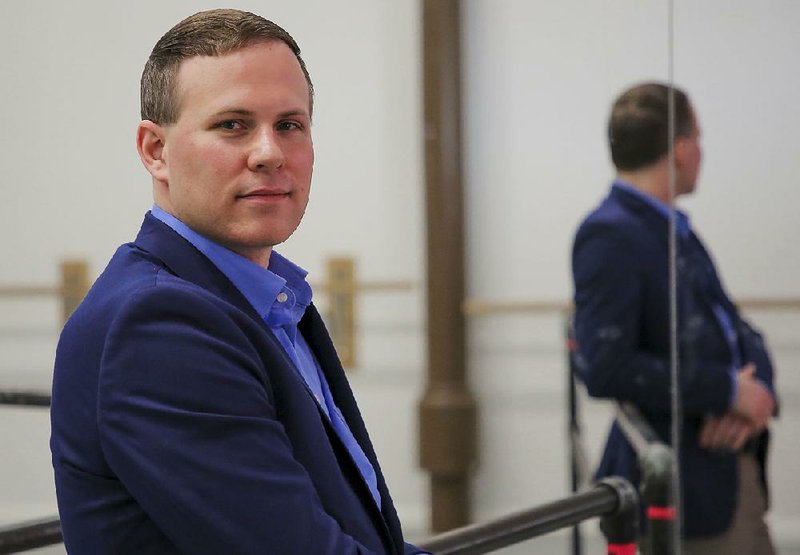 “I would like to see us become a namesake in various regions of the state. I want our productions to touch the lives of as many Arkansans as possible. I would like to continue diversifying and expanding our repertoire, adding more dancers, extending our season from 30 to 35 weeks, touring more out of state.” - Michael Fothergill

It started around age 7 when Michael Fothergill's mother Julie noticed that he was moving rhythmically to the music being played at his older sister Amy's ballet class.

"I kind of had movement in my blood," says Fothergill, who turned 36 last month. Those precocious instincts helped pave the path to his present position as executive and artistic director of Ballet Arkansas. He and wife Catherine, associate artistic director, have infused the state's only professional dance company with fresh energy since their arrival in July 2017.

The young Fothergill soon started taking classes in ballet, tap and jazz dancing. By stereotype, boys can be dodgy about ballet. But he was heartened by the dozen other boys enrolled at the studio in Des Moines, Iowa.

A couple of years later, as he recalls, "My teacher said, 'I think you should concentrate on ballet.' And he gave me a video of the movie White Nights, which showcased Mikhail "Misha" Baryshnikov.

"So I watched the very first scene, and it was Baryshnikov dancing a ballet by [choreographer] Roland Petit. Misha was very pyrotechnic, a fireworks explosion, and it captivated me from the get-go. I decided then that I wanted to get more serious about ballet."

After taking lessons in nearby Ames, where his first stage performance came in The Nutcracker, Fothergill spent his summers at age 14 and 15 in intensive programs with Milwaukee Ballet. He soon got job offers from that company and two others, "but I was not old enough yet to live on my own." So he had to decline.

He graduated from high school a year early and went to New York for training in American Ballet Theater's summer intensive program. That led to two seasons as a supplemental performer with the prestigious troupe's second company. By age 17, he was also teaching dance in New York.

Back in the Midwest, Fothergill danced for two seasons with Milwaukee Ballet. He moved west to City Ballet of San Diego, "where I think I really started coming out of my shell."

A fellow dancer's illness gave him the chance to perform for two weeks with a company in Sapporo on Japan's northernmost main island of Hokkaido. He got a job offer there, but "I thought I wasn't really ready to leave the States."

That journey did lead to a relationship with the dance community in Japan, where he has returned every year since. He is scheduled to go back again in April to judge an international ballet competition.

For some years, before joining Alabama Ballet in 2010, he was a high-profile globetrotter. In addition to Japan, he danced in Mexico and Germany, along with U.S. venues. He also began choreographing. His early creation Sitting, Standing, Walking won a prize in Germany and was performed in Iceland. He proudly attended the production in Reykjavik.

Asked how many dance pieces he has choreographed, Fothergill says, "I stopped counting after 60." He has done more than 40 professional commissions to create ballets. Before the job materialized in Little Rock, he had planned to focus on choreography and travel.

He remembers "thoroughly enjoying my seven years in Birmingham as a principal dancer with Alabama Ballet." The stay was enriched personally by meeting his future wife.

"Catherine, previously a seasoned dancer with Louisville Ballet, had been in the Alabama company for a year or two and was also dancing leads," he recalls. Their first ballet danced together -- perhaps a harbinger of their loving relationship -- was Snow White, with him as Prince Charming and her as the sleeping maiden brought back to life by his kiss.

They started dating later while cast in Romeo and Juliet, a tale with a less happy ending. As he remembers, both of them had just ended other relationships and wanted to proceed with caution.

"We dated for about three years before I proposed," he says. Before and after their marriage, the couple danced full-length classical ballets such as Giselle, Don Quixote and The Nutcracker. They also performed modern works by the likes of Agnes de Mille, George Balanchine, Frederick Ashton and Twyla Tharp.

At the start of 2017, Fothergill and his wife decided to retire from performing. He was just turning 34, "and I felt that I had a lot of good dancing days left. But I wanted to retire when people asked, 'Why?' Not when they asked, 'When?'"

He had never been to Arkansas until early that year, when he took part in a Visions Choreography Competition at the University of Arkansas at Little Rock.

"I was only in Little Rock for a week, but I really enjoyed getting to know Ballet Arkansas dancers and seeing their work ethic up close," he says. "I soon learned that Ballet Arkansas was made up of hard-working and dedicated professionals who care deeply about their community."

Founded in 1976, Ballet Arkansas had some good seasons, but also dealt with financial and legal problems. The professional company disbanded in 2000, then was revived in 2009 with six paid dancers. Michael Bearden became artistic director in 2014, but he lived out of state and was not a full-time presence.

Bearden contacted Fothergill about interviewing to replace him. That led to the job offer here, one of three that the couple received. Ballet Arkansas was the smallest of the three organizations, "but we loved the people here and thought that Little Rock would be a nice place to transition from performing. Turns out we were right."

Board of directors member Charlie Moulton, vice president of the Arkansas Pollution Control and Ecology Commission, calls their hiring "the best decision Ballet Arkansas has made since I've been on the board."

Moulton adds that the Fothergills "have brought energy, focus and renewed enthusiasm to every facet of BA. The quality of our productions is on the rise, the dancers' skills have increased and attendance has significantly grown over the last two years.

"Michael has also been instrumental in increasing BA's bottom line by cutting our overhead, establishing new partnerships and expanding our fundraising. Our recent collaboration with the Center for Humanities and the Arts [CHARTS] is a shining example of win-win for both organizations."

The CHARTS facility opened in 2016 on the University of Arkansas -- Pulaski Technical College campus at 3000 W. Scenic Drive, North Little Rock. Its 456-seat auditorium is the site for most of Ballet Arkansas' performances, and the two entities work together in other ways.

"Among the many things I admire about Michael is his inclusive approach to the arts," says Yslan Hicks, chairman of the UALR Department of Theater Arts and Dance. "In an era of diminished funding for the arts and increased competition among arts groups, his response is uncommon. He imagines ways that we can work and flourish together."

Fothergill arrived in Little Rock with a number of professional aims: "We want to build Ballet Arkansas to a nationally recognized company of high esteem. We want to excite Arkansans about ballet and break down the stereotypes that are associated with ballet."

So far, he says, "We have considerably increased the marketing for our organization and have rebranded the company entirely. We have tripled our seasonal programming, created a series of special performances for young audiences and added a number of popular events such as our Splash Winter Wine Taste."

Ballet Arkansas, with its training studio and offices at 520 Main St. in downtown Little Rock, now employs 14 professional dancers with 30-week contracts. This season, more than 300 aspirants from 15 countries auditioned for positions. A medical team has been enlisted to keep the dancers in the best possible condition. An innovative project designed to build future audiences is the live streaming of performances into rooms at Arkansas Children's Hospital.

Erin Anson-Ellis, the company's general manager with six years on the staff, says that when Fothergill arrived on the job, "it became immediately evident that he didn't have an 'off' switch. He is always looking at the picture from every angle, which means that his creative approach is always evolving."

The Fothergills live in Maumelle, sharing domestic life with "The Queen of Our Household," their cat Audie. To relax, Fothergill paints abstract images and gives them away. "I don't have a single painting of mine in my possession," he says, "and I've probably painted a hundred."

Regarding the challenges of being married and working together, he observes, "From time to time, we disagree about how a ballet should be staged or interpreted. But we get along well. We like spending as much time together as we can. We love what we do, and we love doing it together."

Both Fothergills are outdoor people. "We love hiking. We love to travel, read and watch movies. We both love wine, though we are not well versed in it. And we love cooking."

Next on Ballet Arkansas' 2018-19 schedule is the March 30 Turning Point Gala, the company's main fundraising event. Presented by Parker Audi, it will take place in a spacious hangar of Dassault Falcon Jet at Bill and Hillary Clinton National Airport. The evening will include ballet performances, a band, dancing, a seated dinner, and live and silent auctions.

Ending the season, on May 3-5 at the CHARTS auditorium will be "Forte," a program including Act 2 of Swan Lake; a contemporary work by Ma Cong, resident choreographer of Tulsa Ballet; Balanchine's Tchaikovsky Pas de Deux, and a world premiere choreographed by Fothergill. Plans for the 2019-2020 season are being developed.

Fothergill's ambitions for Ballet Arkansas extend well into the future: "I would like to see us become a namesake in various regions of the state. I want our productions to touch the lives of as many Arkansans as possible. I would like to continue diversifying and expanding our repertoire, adding more dancers, extending our season from 30 to 35 weeks, touring more out of state."

To some degree, he still misses performing -- "the feeling of taking a bow and knowing you gave every bit of yourself to the audience. I miss dancing with Catherine, who was a wonderful partner on stage. I miss knowing that something I danced made a difference to someone in the audience, even if just for a few hours.

"None of these things causes me grief. But I do occasionally reminisce." 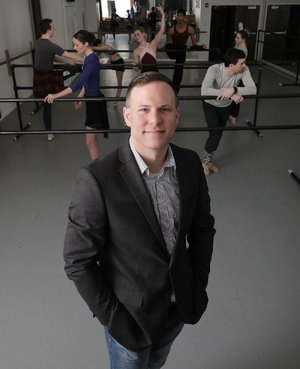 Photo by John Sykes Jr.
“I was only in Little Rock for a week, but I really enjoyed getting to know Ballet Arkansas dancers and seeing their work ethic up close. I soon learned that Ballet Arkansas was made up of hard-working and dedicated professionals who care deeply about their community.” - Michael Fothergill