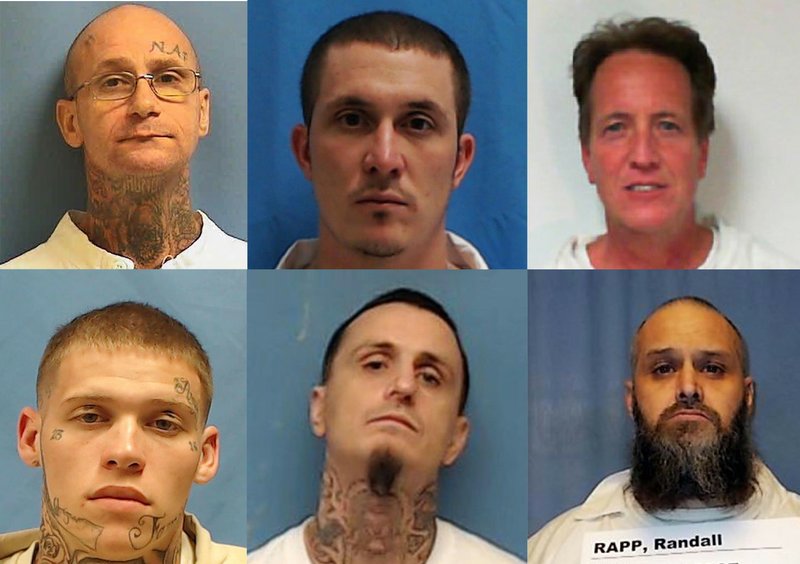 From a jail in Arkansas’ River Valley, 25-year-old Mckelly Leon Harris waited. It was March of 1990. He was already a convicted felon, and at that point he was facing new charges of aggravated robbery and residential burglary.

There, in the Pope County jail in Russellville, where roughly 86 percent of the city’s more than 29,000 residents are white, Harris founded a structured organization of white supremacists, the New Aryan Empire. Its goal was to “preserve the Caucasian race” and to protect its members from inmates of other races.

Over the next two decades, membership in the New Aryan Empire — NAE on members’ tattoos or patches — expanded from county jails to state prisons. As inmates finished their sentences and returned to society, they spread the group’s supremacist views and its narcotics-based criminal enterprise to communities in Arkansas and beyond until, federal authorities said, the group had roughly 5,000 members.

New Aryan Empire members “practice a crude version of white supremacist ideology,” said Carla Hill, a senior investigative researcher with the Anti-Defamation League in New York. “Their number one priority is their criminal enterprise” — specifically methamphetamine sales. “They combine their efforts at criminal enterprise with the bigotry of a hate group.”

That enterprise is the basis of a federal grand jury’s indictment against 17 of 54 defendants, mostly from Pope and Yell counties. The 17 are charged with crimes under the Racketeer Influenced and Corrupt Organizations Act, commonly known as RICO, and the Violent Crimes in Aid of Racketeering statute, or VICAR. Crimes alleged in the indictment include solicitation to commit murder, kidnapping, maiming and conspiracy to distribute meth. Not all of the 17 are charged with all of those crimes.

The U.S. attorney’s office in Little Rock details the founding and structure of the New Aryan Empire in the 47-page indictment. The document does not identify Harris by name, and he is not among those charged. Hill identified Harris as the founder, however, and he boasts of that on Facebook.

On one of Harris’ Facebook pages, his profile picture shows him with NAE tattooed on his forehead as he poses with a white pit bull. The Anti-Defamation League’s website says the pit bull has long been “a skinhead symbol, presumably because of its reputation as a ‘fighting’ dog.”

A phone number Harris posted on Facebook is no longer his, and he did not return Facebook messages requesting an interview. Harris is not currently an inmate in the Arkansas Department of Correction or in the U.S. Bureau of Prisons. The U.S. attorney’s office said that, to its knowledge, Harris is not incarcerated, though it did not rule out that possibility.

Now 54, Harris has been jailed almost half of his life. In 2017, he wrote on Facebook: “Ive spent 24 years locked up. My kids grew up without a dad and my mother grew old and died without her sons because i wanted to act like jesse james.”

Hill said New Aryan members occasionally commit hate crimes, but these are “not their dominant crimes.”

The gang focuses on more traditional crimes unrelated to ideology, such as drug-dealing, though the organization’s membership and gang rules espouse white supremacism, she said.

The gang’s crime victims often are fellow members — labeled as “snitches” or informers viewed as disloyal.

“They will retaliate because … loyalty to the gang is very important to them,” said Hill, who said she believes the gang has closer to roughly 400 members, substantially smaller than the U.S. attorney’s office estimated.

In November 2015, Harris replaced the gang’s original leaders, the High Elders, with a Supreme Council of nine senior members. He retained veto power. The organization also established a code of conduct, 23 rules that instructed members not to fraternize with non-Caucasians, not to talk with law enforcement officers and not to snitch on other members.

The code required a secular form of tithing by requiring members to pay 10 percent of all earnings to the New Aryan Empire. That income and member dues helped sustain the gang’s popularity among inmates and their relatives because the money went to pay members’ bail, to help their families when in need and to promote the organization’s criminal activities.

“It’s sort of a revolving door for many of these [gang members],” Hill said. “They get out [of prison] for a little while; they stick with the criminal enterprise. They stick with their buddies … and go right back.

“If somebody protected you when you’re in trouble, you feel loyalty to them because they saved you. Then you’re making money from them; that helps,” especially since convicted felons often can’t get good jobs, she said.

The rules also forbade members from being homosexuals, rapists or molesters.

Yet New Aryan members do make deals with non-whites.

“In the case of their business, white supremacism takes a back seat,” Hill said.

In the federal case, for instance, at least two defendants are black men accused of conspiracy to distribute meth.

Defendants include more than a dozen members of the New Aryan Empire, but not everyone indicted is a white supremacist, according to the U.S. attorney’s office.

Among the defendants and gang leaders indicted are Wesley Gullett, the group’s 29-year-old president whose nickname Bad Company is tattooed on his chest, and associate Marcus “Red” Millsap, 51, of Danville. Other defendants include people who associated with the gang or wanted to be members but were not formal members. Some defendants’ connection to the gang was limited to drug dealings.

The New Aryans expanded their empire by recruiting new members. Members sponsored prospective members who were put on probation for at least six months. To pass probation, members had to prove their allegiance and value, “commonly achieved through the commission of crimes,” the indictment says. Also, newer members and leaders have taken the blame for crimes that senior members committed.

Incarcerated members often write letters to discuss gang business, the indictment says. Inmates often use cellphones smuggled into prisons to communicate with people outside, and those inside and outside the prison system use Facebook to discuss gang business, it adds. “While some of these communications are in plain language, others employ codes to thwart law enforcement scrutiny,” the document says.

Among those with New Aryan Empire and other white supremacist tattoos is Gary Dunn, whose two murder trials in the 2005 slaying of Arkansas Tech University student Nona Dirksmeyer ended in mistrials. Dirksmeyer was white.

Authorities declined to comment on whether Dunn is a New Aryan. But according to the Correction Department, where Dunn is imprisoned in another case, his tattoos include the NAE patch and the number 234. Dunn was not among those indicted.

According to prosecutors, the number 234 and the Roman Numerals II III IV represent the number of letters in each word of the New Aryan slogan, “To The Dirt,” a reference to the gang’s rule that members must remain in the empire until they die. New Empire members also sometimes wear Nazi tattoos such as swastikas and SS lightning bolts.

On Aug. 27, 2015, Gullett wrote on Facebook that he was “234 till the day I die. That’ll never change.” Above the comment is a picture he posted of an arm with the acronym NAE, a dagger and other items tattooed on it.

Federal prosecutors said the investigation of the New Aryans began in 2016 when the U.S. Bureau of Alcohol, Tobacco, Firearms and Explosives helped the Pope County sheriff’s office in a murder investigation.

The only homicide mentioned in the indictment is that of Bruce Wayne Hurley, fatally shot at age 49 on May 2, 2016, at his home in Atkins, near Russellville.

Authorities have not detailed Hurley’s connection to the gang other than to say Hurley, who was white, paid Millsap $3,600 for about 1.59 ounces of meth on May 1, 2014, and told law enforcement about Millsap’s meth dealings at some point.

The indictment alleges a series of bungled efforts to get Hurley killed — from Millsap’s offering a New Aryan associate $20,000 for the task in 2014 to Gullett’s offering an associate $50,000 in about December 2015. At other points, it says, Gullett offered a New Aryan elder, Jeffrey Knox, 43, of Russellville, $1,000 and prescription pills to help Gullett kill Hurley. In December 2015, the indictment says, Millsap offered a New Aryan member a Harley-Davidson motorcycle worth $30,000 to kill Hurley.

On Jan. 4, 2016, authorities contend that Gullett and Knox tried to kill Hurley by pointing a loaded firearm at him and pulling the trigger. The gun misfired. Knox’s nickname, the indictment notes, is 100%, which the Anti-Defamation League’s website says is “shorthand for ‘100% white’ among white supremacists.”

Later in 2016, New Aryan associate James Scott Oliver, 47, of Russellville purportedly made two offers, one for $50,000 and one for $30,000, to get another associate to kill Hurley, the indictment says.

The indictment never says who authorities believe finally killed Hurley, and no one has been charged in the shooting death in state or federal court.

Hurley’s obituary described him as “an ordained minister” and a car dealer who “loved music and taught guitar.” He also was a convicted felon in state and federal courts.

In early June 2017, it alleges, 10 New Empire members or associates participated in the kidnapping of someone identified as H.D. who also had given information to police about that shooting. While captive, H.D. was stabbed multiple times, and someone permanently disfigured his face with a hot knife. Among the 10 were both Fergusons, Long and Randall Rapp, 39, of Russellville, the indictment says.

The indictment does not identify H.D., though a Pope County criminal case that appeared to involve the same incident does. Records in that case indicate the victim’s girlfriend also was kidnapped and beaten.

Gang members have had access to a wide range of weapons. Authorities seized 69 guns, including handguns, rifles, shotguns and several high-capacity assault-style rifles. Four of the defendants are charged with being a felon in possession of a firearm.

In September 2017, Harris, the gang’s founder, announced his “retirement” in one of a series of Facebook posts that spoke of internal gang strife and rivalry.

“Consider this my RETIREMENT speech for this thing you call a family,” Harris wrote. “I drew our patch, wrote that oath you swear to, and started this family for no other reason than I wanted to. Didn’t [ask] permission nor do I need anyone’s permission to keep [my] patch.”

“Problem is … that a bunch of you wearing a patch are fake … dudes and talk a good game but don’t care about nothing but you and what your family can do for you,” he wrote.

In May 2016, Harris seemed weary of the gang’s meth business and wrote, “All original members of the N.A.E. are convicted felons. … But we have the potential to be much more than a prison gang. … We should be focused on helping to educate and provide for our brothers and sisters locked up.

“There are those who would make our family nothing more than a criminal enterprise to further their own purpose to feed their own greed,” he added. “They don’t care about you spending your life locked away from your loved ones. They do not care about the fact the dope they keep in your face is destroying families.”

The Arkansas Democrat-Gazette gathered information for this article from a range of sources. They included the Anti-Defamation League; law enforcement authorities; the federal indictment and accompanying materials released by the U.S. attorney’s office; past news accounts; a government website containing information on current and past federal court cases; a government website providing information on state court cases; and the Arkansas Department of Correction’s website, which provides mugshots and details about inmates, including some of their tattoos and other body markings.