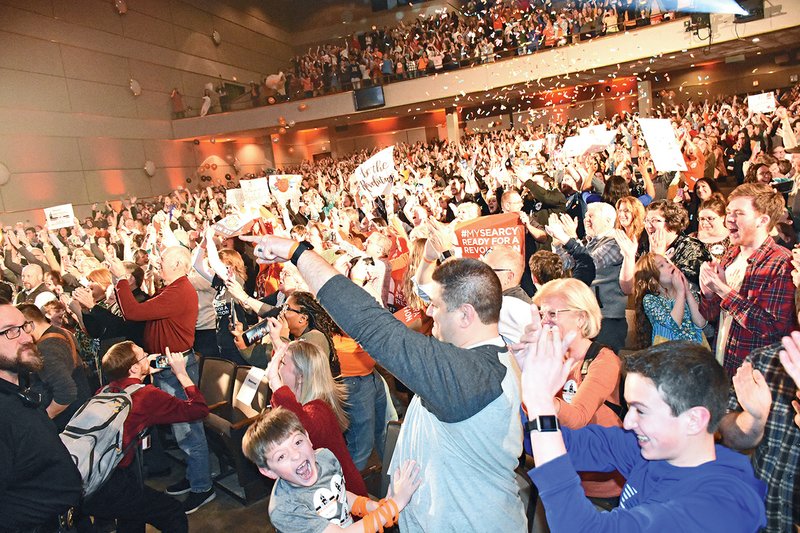 Jace Faulkner, 8, left, reacts last week when Searcy was named the winner in the Small Business Revolution-Main Street contest. He is standing next to his father, Mat Faulkner, who entered the city in the contest when he saw it on Facebook. Mat’s wife, Shelley, is pictured celebrating behind Jace, and their oldest son, Easton, 13, is at right. Searcy made the top 20, the top 10, the top six and was named the winner after a public, nationwide vote. Searcy gets $500,000, and producers of the online and Hulu series will choose six businesses to receive help. Searcy will be featured on the eight-part series in October

The city, one of 12,000 applicants, won the Small Business Revolution-Main Street contest and will receive $500,000 for six businesses to get makeovers and be featured on season four of the online and Hulu series.

Ty Pennington and Amanda Brinkman are the co-hosts of the show, which is sponsored by Deluxe, a national marketing company.

“Now as the winning city, now it’s on. Now is when it truly starts for Searcy,” Burton said Wednesday.

Brinkman made the announcement live Tuesday evening as hundreds of Searcy residents gathered at a watch party at Harding University. After several weeks of an online social-media campaign, making three cuts and earning a visit by producers in January, Searcy got the most votes in the nationwide contest.

Mat Faulkner, owner of Think Idea Studio, entered Searcy in the contest “on a whim,” he said.

About 200 businesses originally applied to be considered for makeovers, but that slate is wiped clean, Burton said.

“Put in an application if you want to be considered,” she said.

Applications can be found at MySearcy.org and the deadline to apply is March 5.

“[For the] 200 businesses who signed up at the very beginning, this is round 2. That first round gave [producers] some insight. They did visit some of those businesses so they could kind of get a feel for what we had to offer and the support level we had, which was through the roof,” Burton said.

The businesses can be “anywhere in Searcy,” she emphasized, not just in the downtown area. Deluxe will decide which businesses are selected. The makeovers can be everything from renovations of physical locations to logos.

“They’ll narrow it to 30 and really go through it; then they will pick out the top 12. When they get to the top 12, there will be a Small Business Revolution team come back to Searcy mid-March, and they will do interviews with their 12 considerations and narrow it down to six.”

Searcy will hold another community party, and Pennington and Brinkman will come to announce the six winners, Burton said. And the cameras will be rolling.

“They’ll start filming the process. Some of that footage will go into the show,” Burton said.

The crews will be in Searcy a couple of months, city officials said. The eight-part series will air in October focusing on the businesses.

One of the hopeful business owners is Sheryl Kurck, who opened Lavender and Lace Boutique on Spring Street about 1 1/2 years ago. It’s a clothing store for “curvy women,” she said.

Kurck said she got to meet Brinkman when producers visited Searcy.

“They did visit my store when they were here, and we talked a little bit about marketing strategies and things like that,” Kurck said. “They were extremely, extremely sweet people and helpful.”

“Most of our things that we’re asking for are not monetary things. We need community awareness about our store. We’ve been here a year and a half, and I still have people come in almost daily and say, ‘I didn’t know you were here.’”

Kurck said she’s tried a variety of advertising, “so we really are asking more for marketing strategies. We want to increase our online presence.

“We are a specialty store. … To really make a success of our store, we’ve got to increase our visibility locally and online.”

Kurck said some people are leery of reality TV, but she isn’t worried.

“It definitely is a reality TV show,” Faulkner said, “and the producers want the businesses … to be willing to be vulnerable and share the good, the bad and the ugly of their businesses. They want other businesses in the country to see it and learn from it.

“They want to show a good before and after so other people can learn from it. That’s part of the revolution — that spreading the information so that others can benefit from it, not just the six.”

Lindsey Edwards, who owns Southern Roots Hair Salon, said she plans to reapply to be considered, too.

“I’m currently a one-person salon owner, and I actually sign papers tomorrow (Feb. 28) on a new building on the court square,” she said.

Edwards, who grew up in Searcy, said May 1 will be her two-year anniversary of owning the salon.

“I’m going to be a little bit bigger salon. This will be the first time I’m involved in hiring more people. I’m hoping [Deluxe] can help me grow into that role,” she said.

Edwards said the project is a boost for the city.

“I think it’s going to bring a lot of awesome things to Searcy,” she said. “I know it’s definitely sparked a flame, and everybody’s gotten real excited.”

Burton agreed that not only has Searcy pulled together, but friends and family all over the United States got involved in voting.

“You know, and I’ve said it and said it and said it, but a win for Searcy is a win for the state of Arkansas,” Burton said. “This is going to be an economic development tool, and if we strengthen the businesses in Searcy, there will be a trickling effect in the state. Searcy really understands that impact because when oil and gas were at their peak in central Arkansas, Searcy was doing great. But we saw when large oil and gas companies pulled out of this region, … we lost jobs for suppliers … trucking companies, water haulers, contractors, pipeliners and others.”

“It wasn’t just in Searcy. It was all around the state, so we understand that you may not live in Searcy, but one, you may have family and friends who do, or someone may get supplies from a business in your town.”

Burton said the Main Street organization has a wish list, too.

“It’s a $500,000 investment in small businesses and community improvement. If money is left, that’s when [the producers] approach us and say, ‘What are some of your needs?’” Burton said.

“We kind of have a wish list,” she said, “and one thing we would love to have as a community is some sort of a branding campaign, something we can use to empower ourselves to go after new businesses, like a recruitment package of sorts for Searcy as a great place to work, a great place to live — that kind of thing.

“We would love to have more street lights and more trash receptacles and more benches and a wayfinding system around town to pull people into the town.”

Improvement to city parks and a project for the Rialto Theater are possibilities, too, she said.

The top-six cities were chosen in mid-February, and those six were in a nationwide online contest, and the public voted through 10 p.m. Feb. 19. Searcy was in the top spot, but it dropped to second under Durant, Oklahoma, on Feb. 18.

The other cities in the running were Canon City, Colorado; Camas, Washington; Corsicana, Texas; and Washington, North Carolina.

Burton said that more than 24 hours before the deadline, “it went dark,” and nobody knew the standings.

More than 1.6 million votes were cast, according to a news release.

“We know the total votes, but they will not tell us the numbers,” Burton said.

In the beginning, residents had to show #MySearcy flyers in selfies or put them in the windows of their businesses and post photos. They had to like the Small Business Revolution Facebook Page and say why they loved Searcy — the people, the businesses and why Searcy should win.

Once Searcy made the top 20, residents promoted Searcy with a video. Community and state leaders and entities got in on the act. The Searcy Regional Chamber of Commerce has been at the forefront, as well as the White County judge, the Searcy mayor and even Gov. Asa Hutchinson.

It took everyone working together to get the win, Burton said, and they’re not stopping now.