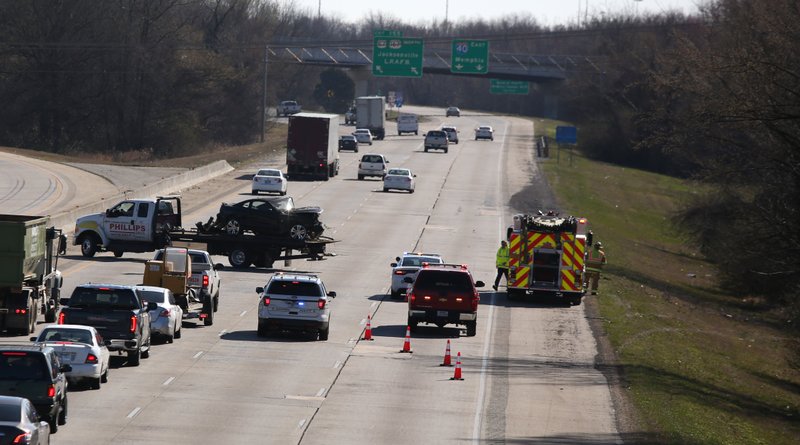 Authorities clear an accident in the eastbound lanes of I-40 near North Hills Boulevard in North Little Rock on Wednesday.

A central Arkansas woman was killed and her child passenger injured after her vehicle veered off Interstate 40 and struck a tree during the Wednesday morning rush hour in North Little Rock, authorities said.

The Arkansas State Police said the wreck happened just before 8:15 a.m. in an eastbound lane of I-40 near North Hills Boulevard.

Officials identified the driver as 37-year-old Stephany Robertson of Conway.

A minor listed as a passenger in Robertson’s Ford Mustang was taken to a local children's hospital for his injuries. The report didn’t list his medical condition Wednesday afternoon.

Crews cleared the crash around 9:30 a.m. and reopened a lane that had been blocked, according to the Arkansas Department of Transportation.

Police noted dry and clear conditions at the time of the wreck.

Preliminary figures show at least 67 people have died on Arkansas roads so far this year, including six in March.