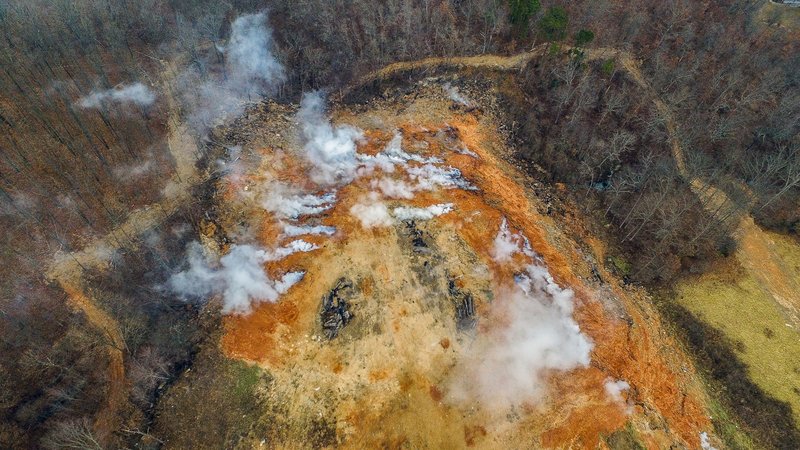 This March 1, 2019 photo provided by Apex Visual Solutions shows an underground fire at an illegal dumping site in Bella Vista, Ark. The fire, which started in July, is beneath dozens of feet of waste and dirt in a former dump intended for tree limbs and stumps. It has been smoldering for at least seven months, sending noxious smoke throughout the community, with costs to extinguish it estimated in the tens of millions. (C. Nelson/Apex Visual Solutions via AP)

The Senate on Tuesday approved a bill that would give the state Department of Environmental Quality $20 million more in spending authority for contractual services to fight and clean up the slow-burning underground fire at a dumping ground for stumps in Benton County.

The supplemental appropriation also would allow the Department of Environmental Quality's director to ask the state's chief fiscal officer to lend up to $10 million from the state Budget Stabilization Trust Fund to the department's Hazardous Substance Remedial Action Trust Fund this fiscal year, which ends June 30.

The stabilization fund has existed for many years and is a reserve fund that can make loans to state departments as needed. The remedial fund is set up specifically for the environmental department for emergencies involving pollutants. The hope is that the state will be repaid either by the federal government or others.

On the other side of the Capitol, the House approved amending the Department of Environmental Quality's appropriation for fiscal 2020 in House Bill 1213.

The amendment to HB1213 would include the $20 million in additional spending authority for fiscal 2020, which starts July 1. It also would allow an additional $10 million loan, according to Kevin Anderson, assistant director of fiscal services for the Bureau of Legislative Research. The amendment would increase to $26.1 million the department's spending authority for contractual services for hazardous waste cleanup.

"Loan repayments shall be made from time to time from any legal fund of the Arkansas Department of Environmental Quality and the entire amount of the loan shall be repaid to the Budget Stabilization Trust Fund by June 30, 2023," according to both bills.

Hendren told the Joint Budget Committee on Thursday that "the hope here is that if we use some of the trust fund that is over at ADEQ that is designed to clean up situations like this that we can get that money repaid eventually from the EPA [federal Environmental Protection Agency] or from the responsible parties, so this does not make a final determination on who is going to end up paying the bill for this.

"Though it does allow us a mechanism to be put in place so that we can start paying somebody to clean it up and then sort out exactly who is going to pay it after the investigation is done," he said.