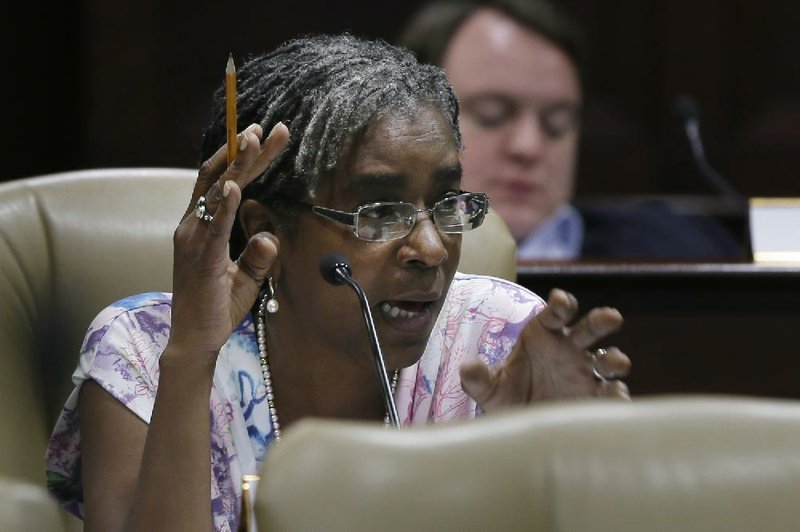 Legislation that would eliminate the "duty to retreat" from Arkansas' self-defense laws was narrowly voted down in a Senate committee meeting Wednesday evening, after hours of testimony against the measure from gun-control groups, law enforcement, prosecutors and civil-rights advocates.

Efforts to pass similar legislation -- known as "stand your ground laws" -- date back at least a decade in Arkansas. All have failed under both Democratic and Republican legislatures.

Debate over Senate Bill 484, which stretched into the early evening, reached a crescendo as Sen. Stephanie Flowers, D-Pine Bluff, raised her voice in a plea against a successful attempt by other members of the Judiciary Committee to limit debate.

"My son doesn't walk the same path as yours do, so this debate deserves more time," said Flowers, the only black member of the eight-member committee. "When you bring crap like this up, it offends me."

"No the hell I don't. What are you going to do, shoot me?" Flowers responded.

After walking out of the committee room to smoke a cigarette with a colleague, Flowers returned to hear members of the Arkansas State Police, Arkansas Association of Chiefs of Police and the Arkansas Sheriffs' Association voice their opposition to the bill. Clark later said no action would be taken against Flowers.

The GOP-controlled committee voted 4-3 against the bill, with all three Democrats and one Republican, Sen. John Cooper of Jonesboro, joining the opposition.

SB484's sponsor, Sen. Bob Ballinger, R-Hindsville, said afterward that Cooper "made a bad vote." An attempt to expunge the vote failed. Ballinger said he would attempt to revive the bill later in the session.

Neither Gov. Asa Hutchinson nor Attorney General Leslie Rutledge, both Republicans, have publicly endorsed or opposed the bill. A spokesman for Rutledge said in an email Thursday that the attorney general was "monitoring" the bill and working to ensure its language is "unambiguous." The governor's spokesman said Hutchinson would continue to meet with law enforcement over the bill.

In committee, Flowers' charged testimony clashed with that of Sen. Trent Garner, R-El Dorado, who was the only noncommittee member to speak for the bill.

Garner disclosed that he had once been shot during a mugging one night while out with a group of friends. The senator, who said he had attempted to reach for the gun while scuffling with the shooter, questioned whether he could have been prosecuted had he been successful in grabbing the gun and killing his attacker.

Immediately after giving his testimony, Garner got up to leave without taking any questions. In their later comments, three state prosecutors used the example of Garner's story to say that he would have been adequately protected under the current law.

"In our opinion, the law is not broken and we do not need to change it," said Bob McMahon, the state prosecutor coordinator.

Arkansas is one of only three states in the South where the laws still require some form of a duty to retreat before using deadly force, according to the National Conference of State Legislatures. The other states are Maryland and Virginia. 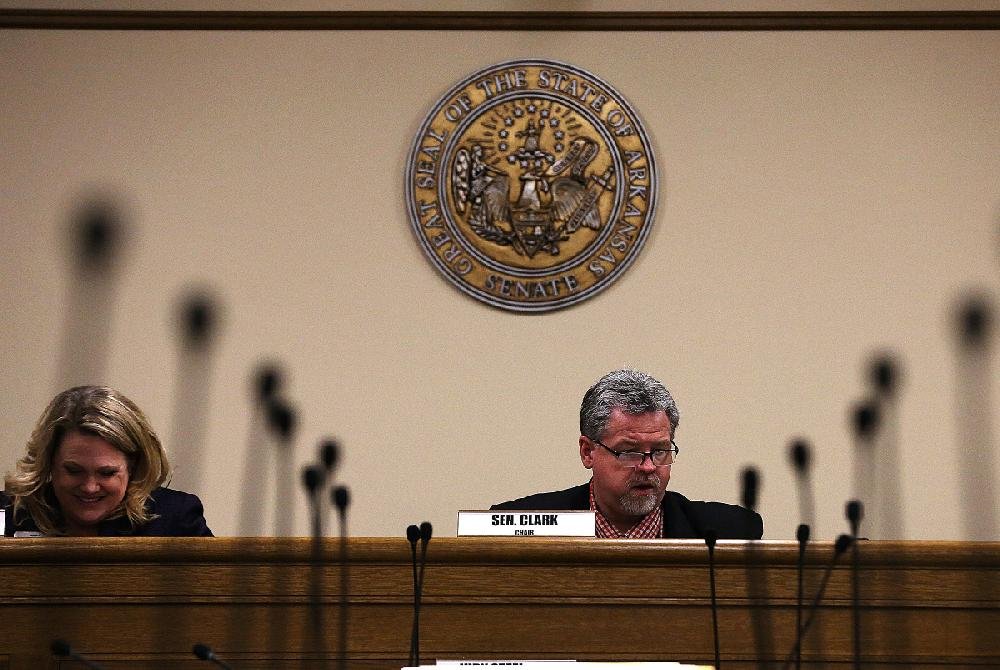 Senate Judiciary Committee Chairman Alan Clark waits for the start of the committee’s session Wednesday that included a sharp exchange between Clark and Sen. Stephanie Flowers.

Arkansas Code Annotated 5-2-606 says that a person can use deadly force if he is "unable to retreat with complete safety."

While debating the bill, Flowers and a representative from the gun-control group Moms Demand Action for Gun Sense in America each said the bill would have a disproportionate impact on black Arkansans. They, along with Sen. Greg Leding, D-Fayetteville, brought up the case of Trayvon Martin, a black teenager who was shot and killed in Florida in 2012 by a man who was later acquitted after claiming self-defense. (According to The Washington Post, Florida's stand-your-ground law was not specifically raised by the defense.)

Flowers said that the Trayvon Martin case, as well as an event in which she said a group of men demonstrated while openly carrying weapons outside her law office in downtown Pine Bluff -- a majority-black city -- left her feeling "threatened." Flowers said she also felt threatened by Garner, who she believed had been carrying a concealed handgun around the Capitol.

Garner later told a reporter he was not carrying a concealed weapon at the Capitol on Wednesday. Garner said he has an enhanced concealed-carry permit, which would permit him to carry a handgun in the Capitol, adding that he "exercises that right when necessary."