Rhapsody editor, a chorus of cheers and jeers 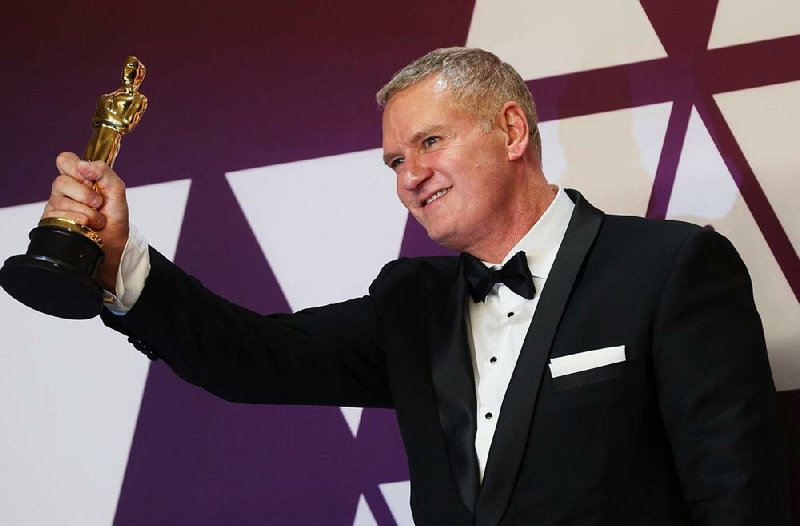 John Ottman, who also works as a film composer, won an Oscar for his editing work on Bohemian Rhapsody, a problematic project which saw its original director, Bryan Singer, replaced by Dexter Fletcher near the end of filming.

If film editing is an "invisible art," then the Academy Award for best editing really goes to the "most invisible" editor.

But in this year's case, the prize acknowledged something more.

John Ottman won for editing the Queen bio-pic Bohemian Rhapsody, a film notorious for its dramatic production. According to the Hollywood Reporter, director Bryan Singer was frequently absent on set, enough so that Twentieth Century Fox fired him with three weeks left of shooting. Singer also reportedly locked horns with actor Rami Malek, who played Freddie Mercury. (Malek hasn't gone into much detail about the claims, other than saying that working with Singer was "not pleasant.")

When Singer was fired, Ottman feared he might be collateral damage. But the brass at Fox saw the two-hour assembly he had cut together, and "had this huge sense of relief," he surmised.

"I think that's when they realized I should stay on," Ottman said. "I had invested so much in it. I wasn't going to leave easily."

The remainder of the film was shot by Dexter Fletcher -- who directed the forthcoming Elton John film Rocketman -- although Singer retained director credit. (In January, the Atlantic published allegations of sexual misconduct against Singer, who forcefully denied the claims.)

Bohemian Rhapsody, while panned by many critics as trite and generic, became a box-office juggernaut -- taking in more than $850 million worldwide and earning numerous awards, including a Golden Globe for best drama and four Oscars.

And some saw Ottman as the key to this success.

"John saved this film from being a complete and utter mess, which in the hands of a lesser talented editor it would probably have been," Aaron Yamamoto, an editor whose credits include Dragonheart, posted on Facebook. Paul Hirsch, editor of the original Star Wars, said that he admired Ottman, and that the movie was "beautifully edited." Others echoed that sentiment.

Ottman has been Singer's editor since the two met 30 years ago during film school at the University of Southern California. They worked together on the breakout hit The Usual Suspects, and in their projects, Ottman's role has often gone beyond just editing. On the director's last two X-Men films, Ottman worked with previsualization artists to design and direct elaborate effects sequences. He also has scored all of Singer's films, a rare juggling act in Hollywood. (In the case of Bohemian Rhapsody, Ottman used Queen's own music as score in a few pivotal scenes.)

Editors work in tandem with the production, making rough cuts of scenes right after they're shot. Ottman's editorial duties include letting the crew know whether they can tear down a set and making a list of any pickup shots or additional photography he needs.

Unlike for Singer's previous, visual-effects-heavy films, Ottman started working on Bohemian Rhapsody after principal photography began. Also, unlike other films, he worked away from the set.

"I haven't seen Bryan in over three years," Ottman said. "I know that sounds crazy, but I got to London, and he decided to work it differently this time, where he was going to basically come in after the whole shoot was done and visit me in the editing room and see what I'd put together."

Yet in a strange way, Ottman said, that arrangement was easier than others because he got to work autonomously and in solitude. And the footage he received didn't reflect the reports of off-camera chaos.

"It reminded me of The Usual Suspects, because every single one of them is cast perfectly, and they all have sort of this symbiosis with each other," he said of the film's ensemble. "And that's just a dream for me. So as agonizing as editing is -- you know, I think it's an awful lifestyle -- it gets you through when you're really inspired by the material."

The critical sequence for Ottman, the one that kept him up at night, was the climactic Live Aid concert, which he trimmed from the full 25 minutes to about 13.

"No matter how good the film was up to that point, if Live Aid didn't work, the entire film would collapse and be a downer," he said. "It had to feel emotionally exhausting, in a good way. It couldn't feel like it was being cut down. Because the moment you knew it was being cut down, it was no longer experiential."

Ottman's work was also the subject of a viral video on Twitter that mocked his editing of one particular restaurant scene. The whiplash cuts -- between characters, and even of a chair being pulled out -- were accentuated by a running counter and sound effect, generating comments on how the movie actually won the Oscar for "most editing."

It was one of the scenes shot by Fletcher in the post-Singer home stretch. Fletcher mostly picked up Freddie's relationship moments, along with the origination of "We Will Rock You" and "Another One Bites the Dust." But the story line also got reordered a bit, and dialogue in the original meeting between the band and manager John Reid no longer made sense.

So Fletcher shot the one that takes place outside a London pub.

Ottman was under pressure to make the film's first act move swiftly, but test audiences never got bored and actually wanted more of the band's early days. So he went back and slowed those scenes down and let them breathe more -- but he didn't have time to do so with that meeting.

"Whenever I see it, I want to put a bag over my head. Because that's not my aesthetic," he said. "If there's ever an extended version of the film where I can put a couple scenes back, I will recut that scene!"

Print Headline: Rhapsody editor, a chorus of cheers and jeers