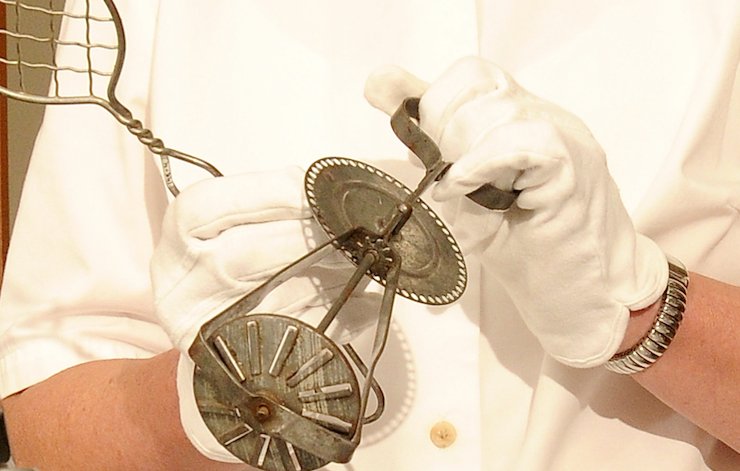 What is it? A Historic Turbine Egg Beater and a wire whisk at Rogers Museum in Rogers, of course. (Democrat-Gazette file photo)

Imagine that the time you've spent in the kitchen has been limited to heating soup or microwaving frozen dinners. One day, you decide to make something that requires a recipe.

Be warned. You'll encounter some baffling verbs. They may look familiar, but don't be fooled.

You start with a pie because you've always heard that phrase, "as easy as pie." The recipe says to beat two egg whites. You configure a tiny whip out of non-minty dental floss and start lashing the liquid in the bowl. You hope no one sees you because you feel silly.

Then the recipe says to fold the egg whites into the egg yolk/sugar/butter mix. How does one fold an egg white? It can't even stay in your hand without tricky maneuvers. "Are we doing origami or baking?" you ask yourself.

You move on to main courses with meat. You have always loved beef stroganoff, and the instructions don't seem too daunting — until the end, when you are told to put the stroganoff into a chafing dish. "Why would I want to irritate my beef and noodles? I already had to strain the noodles." A trip to the dictionary teaches you that a chafing dish simply keeps things warm.

One recipe calls for dredging pork chops. "Hmm," you think. "Do I use the pork chop to dredge around a pot of thick broth? Do I dig into the pork chop looking for its center?" You figure it must be the latter.

You visit the kitchen store and ask where you can find a pork dredger. The employee hands you a container of panko breadcrumbs, saying that's his favorite pork chop coating.

You notice a few recipes tell you to bruise some garlic. They say the bruising releases more flavor. "Is that the same as playing hurt?" you wonder as you shake your head at how violent cooking can be.

Another recipe says to clarify the butter. Who is more confused, you or the butter? As it turns out, clarifying the butter removes the milk fats so the butter doesn't burn.

A salad recipe calls for pitted olives. Do you bang the olive with the side of a heavy spoon to make marks on the surface? That's just odd. Wait, you add pits to the olives so they have two each? No, no, you remove the pit.

"Cooking is so illogical," you lament.

Then you think you should maybe stick with breakfast. You find something called coddled eggs. This sounds kinder, for sure. You're a little torn, though. Should food be pampered? Does that make it taste better? You decide to try the recipe. Among the steps, you find instructions that say to crack the egg. So much for coddling.

I couldn't get verbs off my mind this past weekend.

While dining out, I had a waiter named Josh, and I started to wonder whether people always ask if he's just joshing about things.

I struggled to think of other names that were verbs, but I found a few.

After four go-rounds on the Cyclone at Coney Island, Peter began to peter out.

Rose rose at 6 every morning to run, no matter the weather.

Mark marked the map with all the places he hoped to visit. (This was long ago, when maps were made of paper.)

A few of the examples were nicknames.

Bill didn't have cash for the electrician, so he said, "Just bill me."

Bob hated apples, but at the Halloween party, he bobbed for them anyhow.

Don donned his leather jacket because of the low temperatures.

And some of those names needed an assist from words such as "up" and "out."

Costs were rising, so Jack had to jack up his prices.

Mike miked up the celebrities on the talk show.

Max maxed out his credit cards on silk ties and tie clips.

The truth finally dawned on the normally trusting Dawn.

Oh, my goodness. This verb stuff just reminded me of a peculiar taunt from childhood. True, the spelling is off a little, but two kindergarten bullies would often ask me:

"Bernadette, did you burn your debts?"

I have no idea where 5-year-olds learned about debts, or why they thought it was OK to burn them.