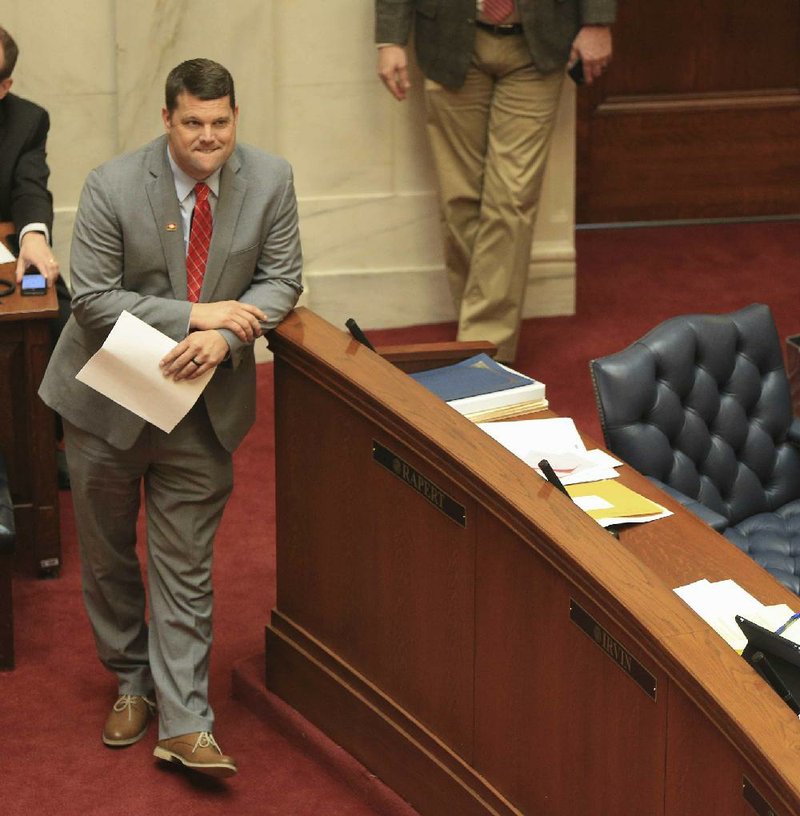 Sen. Bart Hester, R-Cave Springs, waits Monday in the Senate to present a bill that would exempt documents re- lated to execution drugs from Freedom of Information Act requests. More photos are available at arkansasonline. com/312genassembly/

Legislation that would exempt almost all documents related to the state's execution drugs from public records requests handily cleared the Arkansas Senate on Monday.

The Senate voted 25-9 to approve Senate Bill 464 by Sen. Bart Hester, R-Cave Springs, sending the bill to the House for further action.

The state Department of Correction has been without a usable supply of execution drugs since last year, which officials attribute in part to the ability of journalists, public advocates and attorneys to identify the manufacturers of previous drug supplies under current law.

Many large pharmaceutical companies oppose the use of their products in executions, and they can put pressure on suppliers and pharmacists to stop them from selling certain drugs to state executioners.

The confidentiality provisions in SB464 would give broad exemptions from the state's Freedom of Information Act to any documents that "may" identify, or lead to the identification of, drugmakers, suppliers, testers or transporters.

"When the Legislature passed the first law, the original intent was to provide confidentiality. Because of an unintentional omission, manufacturers were not included," the Republican governor said in a written statement.

Hester told senators that the most important part of the bill is "we are making ... recklessly releasing that information a Class D felony," punishable by up to six years in prison.

Sen. Will Bond, D-Little Rock, questioned the basis for making that a Class D felony.

But Sen. Linda Chesterfield, D-Little Rock, said, "If you are going to take people's lives, the people in this state have a right to know what you are using and by what manufacturer because we have some responsibility in this state to make sure that what we do, even in death, is done decently and in order.

"So now a person who exercises his or her will to say, 'This is what they used and I think it is wrong,'" they will face a severe prison sentence and fine, and "it doesn't make sense," she said.

"We should go with transparency. If you want to do it, you ought not be ashamed of what you are doing," Chesterfield said.

"It is only the manufacturer's identity that we are keeping private," Hester said.

Under SB464, he said, the director of the Correction Department "shall certify under oath the drug ... meets the requirements of the subsection, so we know Director [Wendy] Kelley will sign and certify that the drug" is what is needed for an execution.

The Arkansas Freedom of Information Coalition is a private group; among its members are journalists, lawyers and people representing academia and public relations.

Last Thursday, Sonny Albarado, an editor of the Arkansas Democrat-Gazette and member of the coalition, told a Senate committee that the bill would allow the state to switch the types of drugs in executions "without anyone knowing there's a change."

Meanwhile, the task force on Friday voted unanimously not to recommend the bill's passage.

The Correction Department, which holds 30 men on death row at the Varner Unit in Lincoln County, announced last July that it had ended its search for execution drugs, after the Arkansas Supreme Court ordered the agency to produce certain documents related to the drugs to members of the public who sought them through public records requests.

The method of execution now used in Arkansas calls for a three-drug "cocktail" -- made up of the sedative midazolam, the paralytic vecuronium bromide and a heart-stopping dose of potassium chloride. The makers of those drugs have accused the Correction Department of bypassing company controls in order to acquire the drugs from third-party suppliers.

Other states faced with similar difficulties in maintaining supplies of execution drugs from pharmacists have turned to alternative methods. Last year, Oklahoma announced it would become the first state to switch to suffocation through nitrogen gas as its primary form of execution. Mississippi and Alabama have also approved the method, though it has yet to be tested, according to the Death Penalty Information Center.

Changing the method of execution, however, would likely result in years of subsequent litigation from the prisoners facing death. The state's current protocol has been upheld by both the Arkansas and U.S. Supreme Courts, and some lawmakers have said they are hesitant about a change.