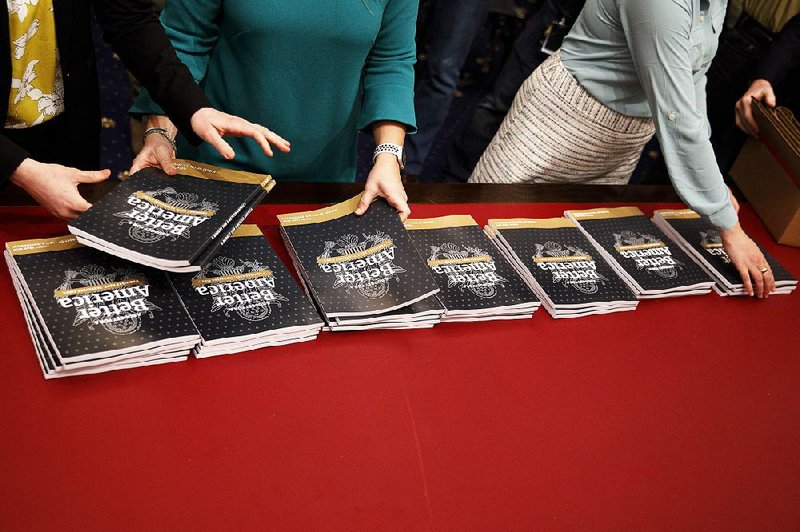 WASHINGTON -- President Donald Trump sent Congress on Monday a record $4.75 trillion budget request that calls for increased military spending and sharp cuts to domestic programs such as education and environmental protection for the 2020 fiscal year.

Trump's budget, the largest in federal history, includes a nearly 5 percent increase in military spending -- which is more than the Pentagon had asked for -- and an additional $8.6 billion for construction of a border wall with Mexico. And it contains what White House officials called a total of $1.9 trillion in cost savings from mandatory safety net programs, like Medicaid and Medicare.

Trump called his plan a bold next step for a nation experiencing "an economic miracle." House Speaker Nancy Pelosi called his cuts "cruel and shortsighted ... a road map to a sicker, weaker America."

The budget is unlikely to have much impact on actual spending levels, which are controlled by Congress. Democratic leaders in both the House and Senate on Sunday pronounced the budget dead on arrival, and Trump's budgets largely failed to gain traction in previous years, when fellow Republicans controlled both chambers.

Sen. Charles Schumer of New York, the Democratic leader, called the proposal "a gut-punch to the American middle class." He said Trump's requested cuts to Medicare, Medicaid and Social Security "as well as numerous other middle-class programs are devastating, but not surprising."

The budget proposes increasing defense spending to $750 billion -- and building the new Space Force as a military branch -- while reducing nondefense accounts by 5 percent, with cuts recommended to economic safety-net programs used by many Americans.

The budget includes proposals that would reduce Medicare spending on prescription drugs and payments to some hospitals through a number of policy changes. The changes to the drug program may have the effect of increasing premiums for Americans who rely on Medicare, but they would also, for the first time, limit the amount that seniors with very expensive drugs could be asked to pay each year. Some of the plans resemble proposals unsuccessfully offered by President Barack Obama in his time in the White House.

The Medicare changes would save $846 billion over a decade, in part through curbing "waste, fraud and abuse." The administration also proposes spending $26 billion less on Social Security programs, including a $10 billion cut to the Social Security Disability Insurance program.

Most of the trims relate to changing payments to doctors and hospitals, and renewed efforts to ferret out fraud and wasteful billing -- oft-cited targets by presidents of both parties.

The spending plan calls for a cut of nearly $1.5 trillion in Medicaid over 10 years and for $1.2 trillion to be added for the block grants or per-person caps that would start in 2021. Under the new arrangement, states would gain far more freedom to set their own rules about how to cover the poor.

Trump also proposed new work requirements for working-age adult recipients of food stamps, federal housing support and Medicaid, a move the administration said would reduce spending on those programs by $327 billion over a decade.

The administration also proposed about $100 billion in savings from unspecified changes to the U.S. Postal Service and a similar amount from cuts to spending on federal employee pension plans. It would cut $200 billion from student loan programs.

The largest proposed reduction would come from discretionary domestic programs, outside of the military, which would fall by $1.1 trillion over the course of a decade.

Those cuts would not be across the board but would come from programs at federal agencies such as the Environmental Protection Agency, where Trump has previously suggested cutting funds. The budget would also reduce spending on foreign aid, international cultural exchange programs and federal employee retirement plans.

For the third year in a row, Trump's budget would cut funding for the Education Department, this time by 10 percent. Congress has repeatedly rejected efforts to reduce the department's spending -- lawmakers instead increased funding for the department last year -- but an Education Department official said this year's request reflected the "desire to have some fiscal discipline and address some higher priority needs."

The budget seeks to cut more than two dozen programs, including a popular after-school program for low-income students, but maintains level funding for students with disabilities and those who attend the nation's most impoverished schools. It would eliminate higher education programs, such as Public Service Loan Forgiveness and subsidized federal Stafford loans, and reduce work-study funding as Education Department officials tweak the program to offer more career-oriented jobs for low-income students.

The budget also requests $700 million for school safety initiatives being coordinated by several agencies, including $200 million for the Education Department. The funding would help schools finance emergency operation plans, counseling and behavioral health programs. There are no requirements for firearms, the department said. A $1 billion federal grant program that school districts looked to tap last year for firearms would be eliminated.

A few domestic spending programs would see increases if Trump's budget were to become law. Those include efforts to reduce opioid addiction and a 10 percent increase in health care spending for veterans. Trump will also propose a new school-choice program and efforts to reduce the cost of prescription drugs.

The proposal cuts the Department of Housing and Urban Development by 16 percent, but includes $1 billion for a child care fund championed by the president's daughter, Ivanka Trump, a White House adviser.

The budget proposes $200 billion toward infrastructure, much lower than the $1 trillion plan Trump once envisioned, but does not lay out a sweeping new plan.

The budget would not balance for 15 years, breaking Trump's 2016 campaign promise to pay off the entire national debt within eight years. Trump's first budget proposed to achieve balance in 10 years. The budget released on Monday forecasts trillion-dollar deficits for four straight years, starting in 2019. Those are largely the result of Trump's tax cut, which has been financed through increased government borrowing.

Rep. John Yarmuth, D-Ky., chairman of the House Budget Committee, said the president's budget "once again lays out an irresponsible and cynical vision for our country, without any regard for its human cost." He added, "Given the important budget hurdles we face this year that will require bipartisan and responsible solutions, the president's budget is a dereliction of duty."

Even some prominent Republicans greeted the president's request somewhat coolly because it did not go far enough to reduce the growing national debt.

Rep. Steve Womack, R-Ark., the ranking member on the Budget Committee, noted that only by cutting mandatory spending could the federal government seriously reduce deficits and debt.

"President Trump's budget takes steps in the right direction, but there is still much work to do," Womack said in a statement.

Information for this article was contributed by Jim Tankersley and Michael Tackett of The New York Times; by Lisa Mascaro, Jill Colvin, Catherine Lucey, Matthew Daly, Richard Lardner, Ricardo Alonso-Zaldivar, Collin Binkley and Andrew Taylor of The Associated Press; and by Amy Goldstein and Jeff Stein of The Washington Post. 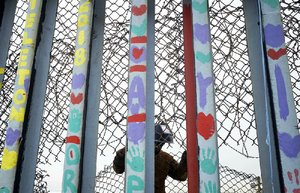